DECATUR, Ga. — President Trump bet his re-election on a very specific vision of the American suburb: a 2020 edition of Mayfield from “Leave It to Beaver” in which residents are white, resent minorities, and prioritize their economic well-being over all other concerns.

The bet fell far short. Mr. Trump lost ground with suburban voters across the country. And particularly in Georgia, where rapidly changing demographics have made it the most racially diverse political battleground in the country, his pitch has been at odds with reality.

From the inner suburbs surrounding Atlanta and extending to the traditionally conservative exurbs, Democrats benefited from two big changes: Black, Latino and Asian residents moving into formerly white communities and an increase in the number of white, college-educated moderates and conservatives who have soured on Mr. Trump.

Those factors helped President-elect Joseph R. Biden Jr. become the first Democrat to win Georgia since 1992. And Senate runoff elections in January will test whether those Biden voters backed his agenda or simply sought to remove a uniquely divisive incumbent.

Though Mr. Trump is not on the ballot next month, he is very much involved in the race, and has not moderated his message despite his chastening at the ballot box. The hope is, to some degree, that the pitch that fell short with suburban voters last month will work when Democratic control of the Senate is at stake.

“Very simply, you will decide whether your children will grow up in a socialist country or whether they will grow up in a free country,” Mr. Trump told the crowd at a rally on Saturday in Valdosta, Ga. “And I will tell you this, socialist is just the beginning for these people. These people want to go further than socialism. They want to go into a communistic form of government.”

Mr. Trump was campaigning on behalf of Republican Senators David Perdue and Kelly Loeffler, who each have distinct political brands that could pose a challenge for Democrats. It’s a challenge Democrats are seeking to overcome, especially among suburban voters, by keeping Mr. Trump front and center.

Jon Ossoff, the Democratic candidate who finished about two percentage points behind Mr. Perdue, which sent their race to a runoff, makes this case at almost every campaign stop: If the Senate stays in Republican hands, it will block the change Georgia voted for when it elected Mr. Biden.

Carolyn Bourdeaux is the only Democrat to flip a House district this year. She won in Atlanta’s northeast suburbs and, like Mr. Biden, embraced her background as an ideological moderate and bipartisan deal maker.

“The Biden effect was probably split ticket voters," she said.

Runoffs, she said, are about turnout, not party-crossing voters throwing a president out.

“You get your people to vote,” she said. “So one of the things you need to have is a real, robust grass-roots field operation.”

Ms. Bourdeaux’s win — and Mr. Biden’s — cracked a code for Democrats in the South, and highlights the changing nature of Atlanta’s suburban electorate, which has helped the party succeed. It was an effort ignited by neighborhood-level organizers, accelerated by an unpopular president, and carried over the finish line because of changes in Atlanta’s inner suburbs and throughout the state’s smaller cities, which showed significant swings toward Mr. Biden.

In Atlanta, long known colloquially as the “Black Mecca” for its concentration of Black wealth and political power, the proportion of white residents has steadily grown. In the suburbs, Black residents who have moved outward and a diverse collection of new arrivals have fueled Democratic change. That includes a growing Latino population, an influx of Asian-Americans, and college-educated white voters who may have supported Mr. Trump in 2016 but turned against him. 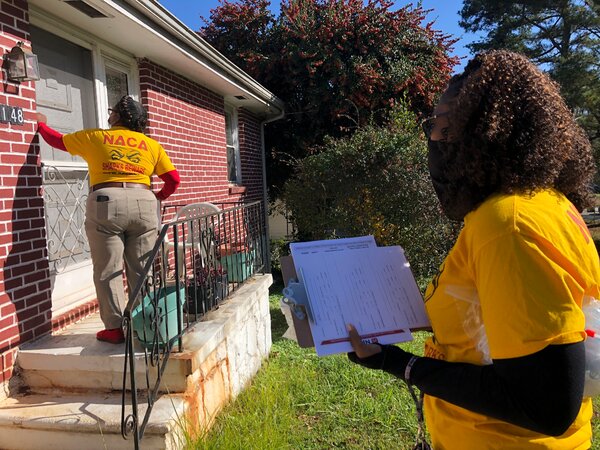 The result is a swing state where the “typical” suburban voter can take many forms. There’s Kim Hall, a 56-year-old woman who moved to suburban Cobb County eight years ago from Texas and attended a rally for Mr. Ossoff in Kennesaw. And Ali Hossain, a 63-year-old doctor who brags about his kids and cares about the economy; he attended an event for Mr. Ossoff in Decatur. He’s also an immigrant from Bangladesh who has begun organizing for state and national candidates.

“Asian and South Asian — we’re becoming big here,” Mr. Hossain said. “This time was history. When I went to early vote I saw thousands of people in line. People were fed up with Trump.”

In Henry County, about 30 miles southeast of Atlanta, Mr. Biden improved on his party’s performance in 2016 by nearly five times. Four years ago, Hillary Clinton bested Mr. Trump by four percentage points. In 2020, Mr. Biden won by more than 20 points.

Michael Burns, chair of the Henry County Democratic Party, said he expected some drop off in interest from general election to runoff. Instead, he’s been overwhelmed with investment from national groups and more local organizers than he knows what to do with.

For the runoff, “we’ve had to turn volunteers away,” Mr. Burns said.

This is part of a larger shift, said Robert Silverstein, a Democratic political strategist who has worked on several Georgia races. Some assume suburban voters are universally moderate and white, not members of the party’s diverse base or progressives. Mr. Silverstein said for Democrats to win the runoffs in January and keep winning in places like Georgia, they have to both energize and persuade.

He noted that in 1992, when Bill Clinton carried the state, more affluent suburbs in Atlanta were “blood red.” Today, he said, the coalitions are vastly different.

Still, the patchwork that made the 2020 Democratic coalition possible is nascent and fragile, and could be defeated by an energized Republican electorate. Both Democratic Senate candidates will have to improve on their showings in November, when the Rev. Dr. Raphael Warnock beat a split Republican field and Mr. Ossoff ran firmly behind Mr. Biden.

Republicans are confident their base will turn out, and that the prospect of the unified Democratic government under Mr. Biden would put off some conservatives fearful of fiscal and cultural change.

The location of their campaign events are a tell of their priorities: Republicans have largely steered clear of the Atlanta metro region to focus on increasing turnout in more rural portions of the state. On Saturday, both candidates rallied with President Trump in Valdosta. The city, which is near Florida and has a large military and Naval community, is geographically three hours from Atlanta but even further in terms of pace and culture.

Democrats are hoping Mr. Trump’s involvement leads to a backlash that helps them consolidate the suburban vote. Last week, in a steady stream of public events, Mr. Ossoff hammered the Republican response to the coronavirus pandemic to Asian-American voters in Decatur, a city in DeKalb County, near Atlanta. During an event near a local university in Cobb County, another changing suburban region, he called Mr. Perdue a coward for refusing to debate him and has been critical of Ms. Loeffler as well.

“We’re running against like the Bonnie and Clyde of political corruption in America,” Mr. Ossoff said.

Some Georgia Republicans have privately expressed discomfort with Ms. Loeffler and Mr. Perdue, who have hewed closely to Mr. Trump and all but abandoned outreach to the moderate center in favor of an all-base turnout strategy.

Whit Ayres, a veteran Republican pollster in Georgia, said Republican erosion in the inner suburbs — and to a lesser degree the conservative exurbs — has blunted the advantage Republicans have enjoyed in runoff elections in the past. While white evangelicals and religious conservatives remain a core of the Republican base, and make up a portion of the suburban electorate, some Republicans worry such issue-driven voters may be put off by the Senators’ willingness to dip into Trump-induced conspiracy theories and misinformation.

Mr. Ayres said both sides have hurdles to overcome before January. Republicans have a president who is sowing discord within their party and Democrats need to mobilize communities that have typically sat out nonpresidential elections. They can’t, he said, count on the same coalition that turned out in November.

“Are these now permanent Democratic voters? No, not at all,” he said. “They’re in transition, and they were put off in large part by the conduct and behavior of the President.”

Both Democratic candidates, the state Democratic Party and outside groups have put together daily canvassing efforts to register and mobilize voters — again. Democrats have also taken notice of polling that shows Mr. Ossoff doing worse against Mr. Perdue than Dr. Warnock is faring against Ms. Loeffler.

Few expect the drop off to be so significant that the parties will split the Senate seats in the end. Much more likely is two Democratic wins or two Republican ones, a contest determined by whether liberals can match an energized conservative electorate that has often been insurmountable in lower turnout runoff elections in the state.

“Definitely demographics are changing. And the white folks, the higher educated voters in Fulton and Cobb counties, they became very anti-Trump very quickly,” said Mr. Silverstein, the Democratic strategist. “My hope, as a Democrat operative, is that they remain that way. But that’s the challenge here. There’s still a lot of Republicans in these suburbs.”

“We’re not going to vote on Jan. 5 on another machine made by China,” said L. Lin Wood, the attorney who has become a conservative hero in recent weeks by echoing the president’s baseless claims of voter fraud. He challenged Mr. Perdue and Ms. Loeffler to be more vocal about overturning the election.

At Mr. Ossoff’s event in Kennesaw, several of his supporters found statements like Mr. Wood’s worrying, and a sign that each part of their state — the cities, suburbs and rural areas — is changing in ways that show Georgians are further apart than ever.

Tamekia Bell, a 39-year-old who moved back to the northwest suburb of Smyrna after years in the Washington area, said it’s up to the voters who delivered for Mr. Biden in November to deliver again.

“That hope we feel,” Ms. Bell said. “It won’t mean anything if Biden gets in there and can’t do anything.”