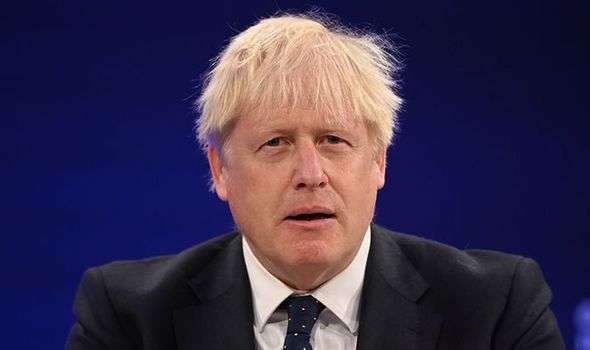 An Ipsos MORI survey, largely carried out before the Westminster lobbying row exploded, gave the Tories a 35 percent share of support among voters, down four points compared with a previous poll in September. Labour backing was unchanged on 36 percent.

Support for the Greens leapt by five points over the same period to 11 percent while the Lib Dems were unchanged on nine percent.

Voters were also unimpressed with the Government’s handling of the response to the Covid pandemic, the survey found.

And concern about climate change intensified in the run-up to the COP26 summit in Glasgow. The survey was the first to show more voters disapproving of the PM’s performance than approving of it for the first time in his premiership.

Fifty-five percent of 1,007 adults quizzed did not agree that Mr Johnson has what it takes to be a “good” prime minister while 34 percent felt he did.

The net approval rating of minus 21 marked a sharp drop from plus two in June.

Sir Keir Starmer had a net score of minus 16 in the responses to the same question. Only a quarter of those asked thought the Labour leader has what it takes for the top job.

Sixty-one percent were dissatisfied with Mr Johnson, and 34 percent satisfied, giving a net score of minus 27, down from minus 12 in September.

For the Government as a whole, 62 percent were dissatisfied while 29 percent were satisfied. The net score of minus 33 was the lowest since last October.

Mr Johnson kept support among Tory supporters however, with 72 percent satisfied with his performance and 22 percent dissatisfied.

Nearly half of voters (48 percent) quizzed in the Evening Standard survey said the Government was handling Covid badly, up 12 points on September.

Some 36 percent say it is doing well, down eight points ‑ the worst score since the end of last year.

Gideon Skinner, at Ipsos MORI, said: “The Conservatives are no longer in as strong position as they were over the summer, although the public are still not convinced by Labour.”