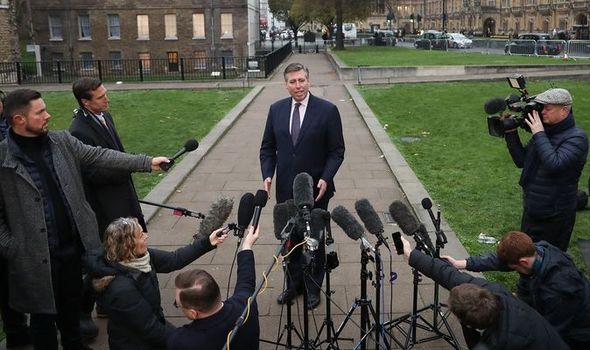 With speculation continuing about the future of Boris Johnson after a torrid November and December, a growing number of Tory MPs believe they need a “clean break candidate” to run for the leadership. One Conservative MP told the Sunday Express: “I’m not sure how long Boris can last. “But if and when he goes his replacement has got to be outside the cabinet, someone with unsullied hands.”

“Anybody in the cabinet has to explain whether they knew about the Christmas parties, why they didn’t resign, if they agreed with all this mess.”

The current bookies favourites to take over after Mr Johnson are Foreign Secretary Liz Truss and Chancellor Rishi Sunak.

Miss Truss has won many admirers with her trade deals and tough talking on china and Russia, while Mr Sunak has been praised for his bailout packages during the pandemic but lost popularity among Conservatives for his tax raising policies to help pay the covid debt and reform social care.

MPs wanting contenders from outside the cabinet have been considering former Brexit minister Steve Baker, who set up the Covid Recovery Group to challenge lockdown policies, and former cabinet minister Esther McVey, the founder of the Blue Collar Conservative Movement.

But the current favourite is Sir Graham, who is chairman of the 1922 committee which represents Tory backbenchers and has been a leading voice questioning covid policy.

As chairman of the 1922 he would have to trigger a vote for a leadership election if he received enough letters from Tory MPs.

He briefly stepped down from the role in 2019 when he was considering a bid to be leader but he decided not to press ahead as Boris Johnson’s campaign became unstoppable.

One Conservative MP said: “Graham is the obvious candidate outside the cabinet. He has a job to do first as [1922 committee] chairman but he’s a Brexiteer, voted the right way on covid and is a proper Conservative unlike most of the current cabinet.”

Another added: “He certainly would represent a clean break and has an enormous amount of respect among MPs.”

Sir Graham stepped down as education secretary in 2007 when David Cameron decided the party would no longer introduce new grammar schools.

The principled resignation on an issue many Conservatives support still resonates with many of his colleagues.

One MP said: “He believes in the things Conservatives should believe in – low tax, opportunity and freedom.”

The government was accused of trying to depose him earlier this year from the 1922 committee because of his sceptical stance on covid policies when he was challenged for the chairmanship by Heather Wheeler but he won the vote comfortably.