WASHINGTON — President Trump declined for a second straight day to commit to a peaceful transfer of power if he lost the election, repeating baseless assertions that the voting would be a “big scam,” even as leading Republicans scrambled to assure the public that their party would respect the Constitution.

“We want to make sure that the election is honest, and I’m not sure that it can be,” Mr. Trump told reporters on Thursday before leaving the White House for North Carolina.

The president doubled down on his stance just hours after prominent Republicans made it clear that they were committed to the orderly transfer of power, without directly rebuking him. “The winner of the November 3rd election will be inaugurated on January 20th,” Mitch McConnell, the Senate majority leader, wrote on Twitter early Thursday. “There will be an orderly transition just as there has been every four years since 1792.”

Democrats were far less restrained, comparing Mr. Trump’s comments to those of an authoritarian leader and warning Americans to take his stance seriously.

Chris Edelson, an American University professor who has studied the expansion of presidential power during national emergencies, said Mr. Trump’s comments represented a unique threat to a central pillar of democracy. “It’s impossible to underscore how absolutely extraordinary this situation is — there are really no precedents in our country,” he said. “This is a president who has threatened to jail his political opponents. Now he is suggesting he would not respect the results of an election. These are serious warning signs.”

Douglas Brinkley, the presidential historian, said, “This may be the most damaging thing he has ever done to American democracy.”

Over the past four years, establishment Republicans have tried to adjust to Mr. Trump’s disruptions, either ignoring his comments or dismissing them as a temporary news-cycle diversion rather than a threat to the democratic process. Republicans appeared on Thursday to be trying to reassure the public about the electoral system while withholding personal criticism of the president, a balancing act that shows their political codependence — one that has led G.O.P. lawmakers, with few exceptions, to faithfully execute his wishes.

Other Republicans, including Senators Susan Collins and Marco Rubio and Representative Liz Cheney, followed Mr. McConnell on Thursday and issued statements conveying an implicit criticism of the president’s stance. “America’s leaders swear an oath to the Constitution,’’ Ms. Cheney wrote on Twitter. “We will uphold that oath.’’

Mr. Trump’s comments follow a series of battleground state polls that show him trailing former Vice President Joseph R. Biden Jr., the Democratic challenger. The president’s standing has not recovered since the beginning of the coronavirus pandemic, despite his repeated efforts to focus voters’ attention on other issues, from the economy to social unrest to the new Supreme Court vacancy.

Mr. Trump initially sparked alarm on Wednesday when, asked about a peaceful transition, he said that “we’re going to have to see what happens” — remarks that intensified the growing partisan controversy over the legitimacy of the elections. Mr. Trump, as he has many times before, questioned the integrity of the voting system, and he repeated that skepticism Thursday, saying: “We have to be very careful with the ballots. The ballots — you know, that’s a whole big scam.”

There is no evidence that mailing ballots to voters increases fraud in the voting process, though there have been scattered instances of the Postal Service’s failing to deliver ballots among other mail that did not reach its destination. 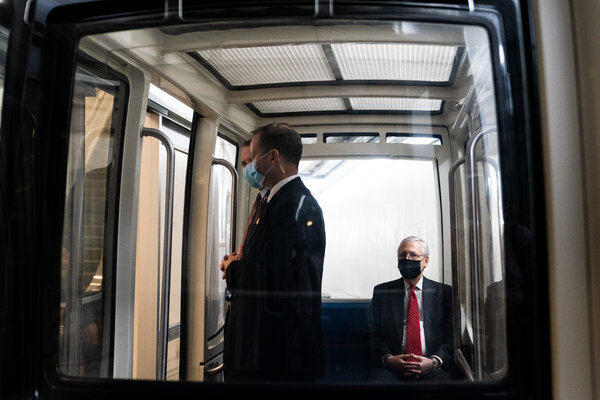 At the Capitol on Thursday, Republican senators and members of the House could not avoid questions from reporters about the president’s sentiment, but party members elsewhere exhibited little appetite for engaging in a discussion about them. Just four of the 168 Republican National Committee members responded to emailed questions about Mr. Trump’s remarks, and just one of the country’s 26 Republican governors — Asa Hutchinson of Arkansas — agreed to address the issue when contacted through their press offices.

“Our common commitment to democracy and the rule of law,” Mr. Hutchinson wrote, “is not dependent upon the actions of any one individual. ”

Republican congressional aides scrambled to respond to Mr. Trump’s remarks on Wednesday night, settling on an informal strategy that affirmed broad constitutional principles and trod lightly around Mr. Trump, the most powerful and popular member of their party. They also attempted to throw the question back at Democrats by seizing on Hillary Clinton’s recent remark, which stopped short of Mr. Trump’s comment, that Democrats “should not concede the election” until all legal options had been exhausted.

Senator Susan Collins of Maine, a moderate facing the most challenging re-election fight of her career — in a state that is becoming more favorable to Democrats — was the rare Republican to refer directly to Mr. Trump as she questioned his actions.