PHILADELPHIA — It was just before noon on Saturday, and Bob Brady was trying to reach Joseph R. Biden Jr. on the phone. Mr. Brady, the chairman of the Philadelphia Democrats, wanted to pass along an increasingly open secret among elections officials and the news media: The city was about to release a tally of roughly 3,000 more votes.

The phone was answered by Mr. Biden’s brother James Biden, who relayed Mr. Brady’s bulletin to the candidate sitting next to him. The significance would not have been lost on anyone who had been closely following the ballot-counting process — if the percentages lined up right for Mr. Biden, the votes would put him over the top.

And, indeed, just as his brother and Mr. Brady hung up the phone, 2,431 votes from the city moved into Mr. Biden’s column, clinching Pennsylvania’s 20 electoral votes, and with them, the presidency.

Philadelphia and its suburban counties had laid the final brick that rebuilt the proverbial blue wall in 2020, and Democrats here wanted to make sure everyone — especially President Trump — knew it.

As the newly counted votes set off a rapid-fire succession of news outlets calling the race for Mr. Biden, the city that heralds itself as the birthplace of American independence from Britain celebrated the toppling of a leader who had provoked its anger. In laying the groundwork for his baseless claims of voter fraud, Mr. Trump had declared from the debate stage that “bad things happen in Philadelphia,” and over the weekend his personal lawyer Rudolph W. Giuliani assailed a history of corruption in the city as he pursued unlikely efforts to challenge the election results.

But ask Philadelphians about when things turned sour with the president, and many will point back more than two years, to his abrupt cancellation of a traditional White House visit for the city’s beloved Eagles football team after its first ever Super Bowl victory in 2018.

In this city with a penchant for deeply held civic grudges, trash talk and impolitic celebrations of its rivals’ travails, where Crisco slathered on telephone poles to prevent climbing is a sign of impending revelry, the blocks around City Hall on Saturday began to resemble the famed Super Bowl parade of 2018.

Chest-pumping pride spilled out, with expressions of enthusiasm for Mr. Biden, the former vice president, often overshadowed by feelings of vengeance toward Mr. Trump.

“Philly knows how to stand up for itself, and love us or hate us, this is what we do right here,” said Rob Cancel, 37, as he joined the celebration outside the city’s convention center on Saturday sporting a red “Bad things happen in Philadelphia” T-shirt. “We come out, we show up and we show them who we are. We’re a strong, strong, proud people.”

Others were more direct.

“I must say, Philly got to tell him he’s fired. Woo!” said Stephanie Marsh, 40, as she skipped down Arch Street toward the convention center.

A widely circulated photograph showed one man holding a sign listing perceived civic adversaries — though it used a different, more profane, word — who had been “defeated by Philadelphia,” including King George III, the former New England Patriots quarterback Tom Brady and Mr. Trump.

Another photo showed a sign held aloft over revelers noting that Mr. Trump had “disinvited the Eagles to the White House.” It added, “So we returned the favor.”

“Philadelphia is a city that will long remember slights, and the fact the president of the United States personally, repeatedly, went after us is something that we absolutely took offense to and wanted to fight back against,” said Representative Brendan Boyle, who represents Northeast Philadelphia and was one of the first members of Congress to endorse Mr. Biden’s presidential campaign. “Donald Trump was insane to pick on Philadelphia. If there was ever a city that anyone should never mess with, it is Philadelphia.”

Separate from the enmity for Mr. Trump, Philadelphia has long been a base of support — and cash — for Mr. Biden, who has strong ties to the city, having served for 36 years as a senator from neighboring Delaware, during which time he lived in the suburbs of Wilmington, Del., about 45 minutes from Center City in Philadelphia. He was sometimes referred to as “Pennsylvania’s third senator,” though his affinity for the state stems to no small degree from his upbringing in Scranton, more than two hours north of Philadelphia. 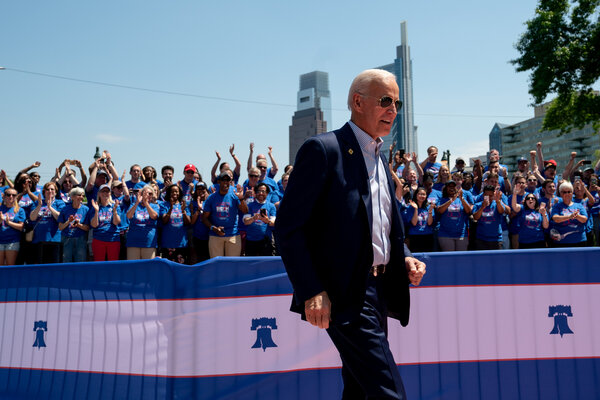 His wife, Jill Biden, grew up in Philadelphia’s northern suburbs and has maintained its distinct accent, to the approval of discerning Philadelphia ears. The future first couple root for the city’s sports teams, and were on hand for the most glorious moment in its athletic history — the Eagles’ victory over the heavily favored Patriots at the 2018 Super Bowl in Minneapolis.

After Mr. Biden’s vice presidency, the university became a key part of his professional base, establishing the Biden Center for Diplomacy and Global Engagement in Washington.

He was paid hundreds of thousands of dollars as a professor by the university, and several of his close advisers, including possible appointees in the nascent Biden administration, were affiliated at various times with the center. They include Steve Ricchetti, the Biden campaign’s chairman and the president-elect’s former vice-presidential chief of staff, as well as Brian McKeon, Colin Kahl, Michael Carpenter and Dan Erikson, former advisers to Mr. Biden.

When Mr. Biden began his presidential bid, he chose Philadelphia for the campaign’s headquarters, as well as his announcement speech and kickoff fund-raiser, which was held at a home in the city’s leafy West Mount Airy neighborhood belonging to David L. Cohen, a senior executive at Comcast. Mr. Cohen, who is also the chairman of the board of trustees of the University of Pennsylvania, had participated in the ribbon-cutting for the Biden Center.

Mr. Biden’s campaign staff had a number of Philadelphia-area natives in prominent roles, including its national political director, Erin Wilson.

To increase turnout in the city, Democrats pulled out all of the stops. They called in celebrity reinforcements like Debra Messing and Kathy Najimy and sent them knocking on doors. They lined up John Legend to croon for a packed parking lot. And they dispatched top political surrogates, including former President Barack Obama and Senator Cory Booker of New Jersey, to campaign in the city.

Local Democrats augmented the effort. Representative Dwight Evans organized car caravans to snake through neighborhoods in his district, which includes parts of North Philadelphia and West Philadelphia, honking at residents to remind them to vote. On Sunday, his caravan drove for 35 miles. Philadelphia stretches just 15 miles north to south.

“The easy thing about this was, it was not persuasion — you only had to ensure that the process was working,” Mr. Evans said. He added that his own 10th Ward, in the northwest part of the city, had voted for Mr. Biden by 97.5 percent to 2.5 percent over Mr. Trump. “And us doing those car caravans was us explaining that process.”

He turned to his friend Bob Brady, the Democratic chairman. “If you’ve got to be in a foxhole, we want you in there with us,” Mr. Biden said.

For Mr. Brady, who has led the Democratic Party in this city for 34 years, the effort in Philadelphia was personal. Mr. Brady and Mr. Biden are close, having grabbed countless “steaks on the go” through the years, perfecting the familiar lean of bending at the hips to avoid cheesesteak stains on their clothes. After Mr. Obama asked him to be his running mate in 2008, Mr. Biden called his wife, and his next call went to Mr. Brady.

And on the Sunday before Election Day, Mr. Biden spoke to canvassers gathered by Congressman Boyle at the campaign headquarters that he shares with his brother, Kevin J. Boyle, a Pennsylvania state representative, in Northeast Philadelphia.

Mr. Biden told the crowd, “We have an expression where I come from: You never forget those who brung you to the dance.”

He thanked Congressman Boyle, saying that “we owe Brendan” for his endorsement on “the day I announced,” and that “it brought along everything else that’s happened.”

When the race was called for Mr. Biden, Mr. Boyle, who gave leave to two of his congressional aides to work in the Biden campaign’s political shop, tweeted: “WE DID IT! PHILLY PUTS BIDEN OVER THE TOP IN PENNSYLVANIA!”

In an interview on Monday, the congressman, who is said to be under consideration for a possible administration post, predicted that a Biden administration would be receptive to the concerns of the Philadelphia area, and not just because of its role in his election.

“It helps to have someone in the White House at the top who is very familiar with our area and cares about it,” Mr. Boyle said.