Welcome to our weekly analysis of the state of the 2020 campaign.

The week in numbers

There’s no telling how things will shake out by early next week, when we start to see results from polls conducted after the president announced his positive coronavirus test results. A batch of state polls released in the days just before that announcement painted a grim picture for President Trump, who trailed Joe Biden by at least five percentage points in phone polls from The New York Times/Siena College, ABC News/The Washington Post and Monmouth University.

In a pair of other surveys by The Times and Siena, Mr. Trump trailed by nine points among likely voters in Pennsylvania, a state he almost certainly needs to win, and by seven points in a key suburban district around Omaha that voted for Mr. Trump in 2016, and awards one electoral vote independent of the rest of Nebraska.

Even before Friday morning, and even in a year in which every month brings a new upheaval, this week was unique. It started with a presidential debate unlike any other, and continued as the White House struggled to clearly denounce white supremacy groups. But it ended with a bombshell: President Trump and Melania Trump, the first lady, said that they had tested positive for the coronavirus, throwing the White House and the presidential race into upheaval.

The president’s chief of staff, Mark Meadows, said Friday afternoon that Mr. Trump was experiencing mild symptoms. The president, who skipped a scheduled afternoon call with the nation’s governors, then went to Walter Reed National Military Medical Center for what was expected to be a stay of a few days. Democratic politicians, including the presidential nominee, Joseph R. Biden Jr., wished the president and the first lady a speedy recovery.

What comes next may define the remaining four weeks until Election Day, and bring the year’s two biggest story lines — a pandemic and a national election framed as a referendum on Mr. Trump — into direct convergence.

Where does the Trump campaign go from here? 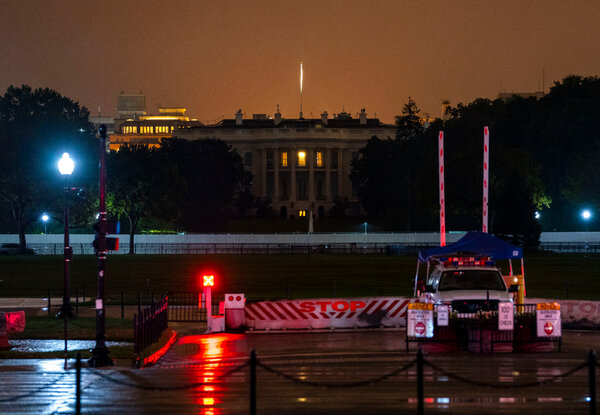 The diagnosis now forces a campaign that has flouted local virus-related restrictions to directly confront the realities of the virus. Here how the diagnosis will impact the Trump campaign, and a caution:

No public events: The Trump campaign, down in the polls and lagging Mr. Biden in fund-raising, has pointed to the energy at Mr. Trump’s in-person campaign events as a comforting sign. On Friday, the campaign announced that it had postponed all scheduled in-person events involving the president or his family. The diagnosis also shines a spotlight on the practices the campaign refused to enforce during rallies: social distancing, mask wearing and congregating indoors.

Caution on health speculation: Mr. Trump and the first lady have said they have mild symptoms after testing positive for coronavirus. Beyond that, the origin of their cases is unknown, as is the full extent of the symptoms they could experience. That distinction is important, to avoid misinformation and speculation that could disrupt the system in a precarious time.

How the diagnosis may affect Biden’s campaign

The news from the White House surprised Mr. Biden’s campaign, which learned of the positive tests from news media reports and not from the Trump campaign. Mr. Biden, his wife, and Senator Kamala Harris of California, Mr. Biden’s running mate, all tested negative for the coronavirus in the past 24 hours.

There are, of course, several ways the diagnosis causes uncertainty for Mr. Biden. In tone and substance, the former vice president will have to restructure portions of his campaign to seem in step with the moment.

The next presidential debate: The Biden campaign has been cautious about the candidate interacting with the public. However, even with limited in-person events, the Biden campaign will now have to decide how to proceed with the next presidential debate, which is scheduled for Oct. 15. That timeline is most likely too soon for someone who has tested positive for the coronavirus just two weeks before. Maybe a debate over Zoom?

Tone down the attacks: It is unlikely that Mr. Biden will reach for his same arsenal of attacks on Mr. Trump and his administration while the president is experiencing a health crisis. This week, after the debate in which Mr. Biden called Mr. Trump “the worst president” America has ever had, there was some hand-wringing by both parties about the number of personal attacks leveled by each candidate. That has already changed Friday, as Mr. Biden’s campaign pulled its negative advertisements and the candidate did not attack Mr. Trump during a visit to Michigan.

Focus on the affirmative message: This week, Mr. Biden’s campaign quietly announced it was resuming in-person canvassing, after months of arguing that it could reach voters without such methods. This could be a time for Mr. Biden and his new canvassing army to focus on making the pro-Biden case for the White House, distinct from his case for removing Mr. Trump. Expect to hear more about health care, climate change and other policies that the campaign thinks draws a specific contrast.

Before Friday, Mr. Trump and the White House were still consumed by the fallout of a debate performance that devolved into personal insults and chaotic moments largely because of the president’s numerous interruptions. Even Trump allies criticized it. What will be remembered by many was Mr. Trump’s remark aimed at the white supremacy group, the Proud Boys, telling them to “stand back and stand by.”

Here are other moments, less talked about, that could cause trouble for Mr. Trump. Polling from battleground states and national debate watchers have shown a majority of respondents think Mr. Biden was the clear winner, mainly because of Mr. Trump’s behavior.

Trump on abortion rights: Though many in Mr. Trump’s sphere see overturning Roe v. Wade as a top judicial priority, the president was noncommittal in a debate exchange with Mr. Biden. When the Democrat remarked that a woman’s right to choose was on the ballot this November because of Mr. Trump’s judicial appointments, the president said “It’s not on the ballot” and “There’s nothing happening there.”

Trump on military veterans: At one point, Mr. Biden confronted the president about reported comments that he called veterans and service members who died in combat “losers” and “suckers.” But Mr. Trump, who has previously dismissed that news report as false, did not take the time to do it onstage or affirm his support for service members. He pivoted to attack Mr. Biden’s son, Hunter, and insulted his previous struggle with drug addiction. After the debate, even some Republicans said that moment crossed the line.

In the latest of the Trump campaign’s attempts to undermine confidence in this year’s election, the president has veered into voter intimidation territory by urging his supporters to act as poll watchers — a practice that is now allowed only because courts in 2018 lifted a consent decree that barred Republicans from poll-watching the past three decades.

A recent Times/Siena College poll found that 56 percent of voters believe that Justice Ruth Bader Ginsburg’s replacement should be chosen by the next president. For some conservatives who are doubtful of Mr. Trump, the prospect of installing Judge Amy Coney Barrett may serve as an impetus to vote Republican regardless.

Democrats across ideological lines have begun embracing structural changes to the current political system. But the growing momentum for reforms like ending the filibuster faces a six-foot roadblock: Mr. Biden.

Many rules have changed during the pandemic, making it harder to figure out how to cast your ballot. This interactive guide can help you ensure your vote is counted.

Keep Up With Our Coverage

Get an email recapping the day’s news