Bernhardt, who has lobbying ties to US energy companies, would replace Ryan Zinke to lead the Interior Department. 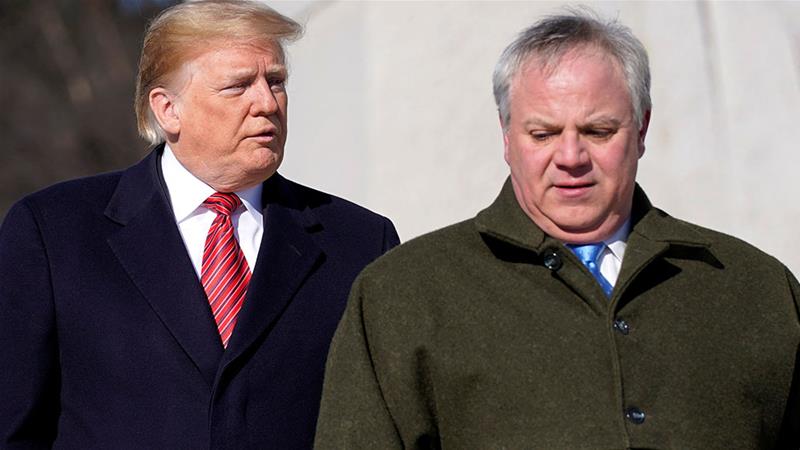 US President Donald Trump said on Monday he would nominate David Bernhardt, a former fossil fuel lobbyist, to be the secretary of the interior, the department tasked with administering and conserving federal lands.

Bernhardt, currently the acting secretary at the Interior Department, is widely expected to continue pushing the Trump administration’s plan to boost domestic fossil fuels production by opening more public lands in the United States to drilling and mining

“David has done a fantastic job from the day he arrived, and we look forward to having his nomination officially confirmed,” Trump tweeted.

If confirmed by the Senate, Bernhardt would replace former Secretary Ryan Zinke who resigned from the Interior Department in December amid questions over his travel, political activity and potential conflicts of interest.

The Interior Department, which employs more than 70,000 people and oversees more than 20 percent of the US land surface, has played a large role in Trump’s “energy dominance” policy of boosting energy production.

As Zinke’s deputy, Bernhardt played a role in efforts to open Alaska’s Arctic National Wildlife Refuge to oil drilling, ease Obama-era protections on a bird called the greater sage grouse to boost drilling and mining across the West, and open federal lands to leases for coal mining.

He is likely to be careful to avoid the missteps that plagued Zinke.

Ann Navaro, a former Department of Interior official who served in the Obama and Trump administrations and worked closely with Bernhardt, said he is a rare “lawyer’s lawyer” who prepares thoroughly for meetings, often being the only one in a room to have read full environmental assessments of projects and plans.

Bernhardt also worked on a series of jobs at the Interior Department under former President George W Bush from 2001 to early 2009, including as the department’s solicitor.

After working under Bush, Bernhardt worked as a lawyer and lobbyist at Brownstein Hyatt Farber Schreck, for water and oil interests. He represented Noble Energy Co, Rosemont Copper Co, Sempra Energy, and California’s Westlands Water District, among others.

Critics say Bernhardt’s previous work as a lobbyist could risk conflicts of interest unless he recuses himself from certain issues, because he worked for companies that could benefit by opening up lands to development.

About 150 environmental groups in 2017, including the business-friendly Natural Resources Defense Council, urged senators to oppose Bernhardt in the confirmation vote for his deputy position, saying his previous lobbyist work raised questions about his ability to act in the public interest.

Despite their letter calling him a “walking conflict of interest”, the Senate confirmed Bernhardt with 53-43 vote along party lines. He was strongly supported by Senator Lisa Murkowski and other politicians who have large areas of US lands in their states.

Once nominated, Bernhardt will again have to be confirmed by the US Senate.