ORLANDO, Fla. — For decades, the same ritual took place in the aftermath of Republican electoral defeats.

Moderate, establishment-aligned party officials would argue that candidates had veered too far right on issues like immigration, as well as in their language, and would counsel a return to the political center. And conservatives would contend that Republicans had abandoned the true faith and must return to first principles to distinguish themselves from Democrats and claim victory.

One could be forgiven for missing this debate in the aftermath of 2020, because it is scarcely taking place. Republicans have entered a sort of post-policy moment in which the most animating forces in the party are emotions, not issues.

This shift was on vivid display last weekend at the Conservative Political Action Conference, where the annual gathering’s Trumpification and the former president’s vow to exact revenge against his intraparty critics dominated headlines.

But just as striking was what wasn’t said at the event. There was vanishingly little discussion of why Republicans lost the presidency, the House and the Senate over the last four years, nor much debate about what agenda they should pursue to rebuild the party.

The absence of soul-searching owes in part to the Republicans’ surprise gains in the House and the denialism of many activists that they lost the White House at all, a false claim perpetuated with trollish gusto by former President Donald J. Trump himself on Sunday, to the delight of the crowd.

The former president was, however, hardly the only high-profile Republican to demonstrate that confronting Democrats and the news media, while harnessing the grievance of the party rank and file toward both, is the best recipe for acclaim within today’s G.O.P.

“We can sit around and have academic debates about conservative policy, we can do that,” Gov. Ron DeSantis of Florida said to an ovation in his CPAC remarks. “But the question is, when the klieg lights get hot, when the left comes after you: Will you stay strong, or will you fold?” 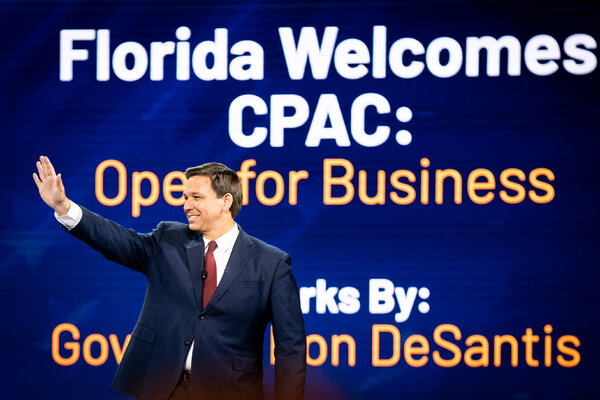 This is the party Mr. Trump has remade — and it’s why so many traditional Republicans are appalled, or at least alarmed, that Trumpism is replacing conservatism.

“The future of the Republican Party depends on debating and advancing big ideas rooted in our belief in limited government constitutionalism,” said Representative Chip Roy of Texas, arguing that the party needed to orient itself around “the case for freeing the American people from the mandates, shutdowns, regulations and taxes pushed by a powerful government.”

Mr. Roy appeared on one of the few CPAC panels focused on government spending, once a central issue on the right, and used his time to plead with the audience. “There’s nothing more important right now than this,” he said. “We are allowing Washington, D.C., to take over our lives but we’re paying the bill.”

If those in the audience felt the same sense of urgency, they didn’t show it

In his remarks later in the day, Mr. Trump sought to explain “Trumpism” — “what it means is great deals,” he ventured — but his would-be heirs plainly recognize that the core of his appeal is more affect than agenda.

Neither sketched out a new policy agenda or presented a fresh vision for a party that has won the national popular vote just once in over 30 years. Rather, they drew repeated ovations for what they share in common: a shared sense of victimhood over media criticism for their handling of the coronavirus crisis and a pugnacious contempt for public health experts who have urged more aggressive restrictions in their states.

“I don’t know if you agree with me, but Dr. Fauci is wrong a lot,” Ms. Noem said in her remarks, referring to the country’s top infectious disease expert. The statement brought attendees to their feet, even as she glossed over her state’s high mortality rate during the pandemic.

Since the dawn of the modern conservative movement in the mid-20th century, there has been an element of victimhood politics on the right — a sense that powerful liberal forces are arrayed against conservatives, and that Republicans can send a message with their vote.

“Annoy the Media: Re-elect Bush” was one of the more popular stickers in the 1992 campaign of George H.W. Bush, who is now frequently remembered as the gentlemanly antithesis of Mr. Trump. Yet within the Republican Party, there were always debates — intense, immense and highly consequential.

In the 1970s, the party clashed over the United States’ role in the world, splitting over control of the Panama Canal and whether the Soviet Union should be confronted with an open hand or a clenched fist. In the 1980s and ’90s, the abortion battles raged, with opposition to Roe v. Wade emerging as a litmus test for many on the right.

In the second Bush administration and the years after, Republicans were divided over immigration and, once again, on America’s footprint overseas.

Notably, many of these clashes played out at CPAC. In 2011, Mitch Daniels, the governor of Indiana at the time, used a high-profile speech at the gathering to warn against the growing peril of “the new red menace” — red ink, not the Red Army — that was aimed at conservatives upset by the heavy spending of George W. Bush and Barack Obama.

Former Representative Ron Paul of Texas, and then his son, Senator Rand Paul of Kentucky, used the conclaves to challenge Bush-style interventionism, delighting youthful audiences and prompting them to flood the straw poll balloting on their behalf.

Not coincidentally, the three top finishers in this year’s straw poll were the three who most prominently flouted coronavirus restrictions: Mr. Trump, Mr. DeSantis and Ms. Noem.

“They are perceived as Trump-friendly, new, young outsiders,” Amanda Carpenter, a former Senate G.O.P. aide who now writes for The Bulwark website, said of Mr. DeSantis, 42, and Ms. Noem, 49.

Interviews with conference attendees suggested that many of them were drawn to the two governors primarily for their style.

Sany Dash, who was selling merchandise at a CPAC booth, explained that she liked Ms. Noem “because she fights back,” adding: “I feel like she’s a female Trump, except not crass or rude.”

“He’s got just the right amount of Trumpiness to him,” Brad Franklin, a recent college graduate, said of Mr. DeSantis.

Others pointed out how the Florida governor had been criticized by the news media for his handling of the coronavirus even though the state has suffered fewer deaths per capita than a number of states with Democratic governors.

Ms. Noem singled out one of those governors, Andrew M. Cuomo of New York, in her remarks on Saturday, prompting a cascade of boos.

Something strikingly different happened, though, when Ms. Noem touched on policy just long enough to lament the rising national debt.

“We have forgotten principles that we once held dear,” she said. Nobody applauded.