WASHINGTON — President Trump’s denunciation of the $900 billion coronavirus relief deal drove a wedge through the Republican Party on Wednesday, drawing harsh criticism from House Republicans and threatening the delivery of unemployment checks, a reprieve on evictions and direct payments to struggling Americans.

His four-minute video on Tuesday night demanding significant changes to the bill and larger direct stimulus checks also threw a wrench into his party’s push to hold the Senate with victories in two runoff races in Georgia next month. The Republican candidates he pledged to support went from campaigning on their triumphant votes for the relief bill to facing questions on Mr. Trump’s view that the measure was a “disgrace.”

Their Democratic rivals appeared to turn a liability into a political advantage 13 days before the election on Jan. 5, agreeing with the president’s demand for $2,000 direct payment checks and calling for Republicans to accede to his wish. Speaker Nancy Pelosi and top Democrats prepared to move forward on Thursday with new legislation that would provide the $2,000 checks, daring Republicans to break with the president and block passage of the bill in the House.

But the effect on struggling Americans was perhaps the most profound: With no deal signed by the president, some unemployment programs are set to run out this week, and several other critical provisions are to end this month. The uncertainty that Mr. Trump injected into the process came at a perilous moment for the economy, as consumer spending and personal incomes resumed their slides.

“Does the president realize that unemployment benefits expire the day after Christmas?” an exasperated Senator Mark Warner, Democrat of Virginia and one of the key negotiators of the package, wrote on Twitter.

It is not clear whether Mr. Trump, who is furious at congressional Republicans who have acknowledged his defeat, would actually veto the package. But given how late it is in the 116th Congress, even refusing to sign it could ensure that the bill dies with the Congress on Jan. 3 and must be taken up all over again next year.

The 5,593-page spending package would not only provide relief but also fund the government through September. With his threat, the president raised the prospects of a government shutdown beyond Monday and also jeopardized a promise of swift relief to millions of struggling Americans and businesses.

Mr. Trump on Wednesday also made good on his promise to veto a major defense policy bill, in part because it directed the military to strip the names of Confederate generals from bases. That sets up a showdown for next week; when the House returns on Monday for the override vote, it could also vote on another stopgap spending bill to prevent government funding from lapsing.

Before the turmoil, Treasury Secretary Steven Mnuchin had promised that $600 direct payments from the pandemic relief bill could be distributed as early as next week; that is an untenable timeline without Mr. Trump’s signature. The end to two expanded unemployment programs the day after Christmas could push nearly five million people into poverty virtually overnight, according to an estimate from researchers at Columbia University.

Some state labor departments — which administer both state and federal unemployment benefits — are already preparing for the end of the programs because of the delay in reaching an agreement, meaning some jobless workers may temporarily lose their benefits all the same because many states will not be able to reverse course in time to avoid a lapse in payments.

Frustration with Mr. Trump boiled over on Wednesday during a private conference call of House Republicans who had loyally stood by the president; many of them had joined a baseless lawsuit to try to overturn the results of election. Representative Kevin McCarthy of California, the Republican leader, told members that he had spoken to the president and that he had not yet committed to a veto of the bill.

But Mr. McCarthy conceded, “This bill has been tainted,” according to one person on the call. 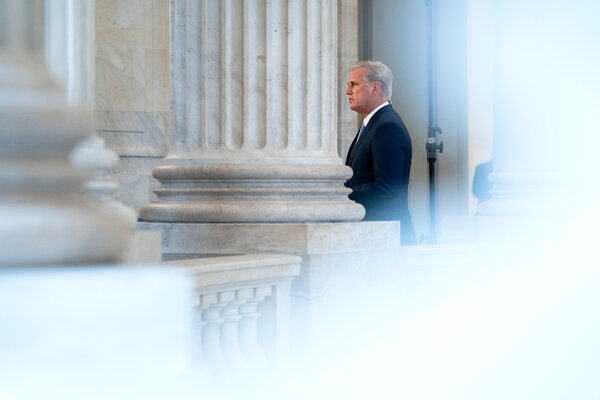 In his videotaped statement on Tuesday, Mr. Trump accused lawmakers of putting aid for foreign governments before the needs of the American people.

Some lawmakers on the call complained about the pork projects in the spending measure; others chimed in to challenge the characterization of the projects as pork, and one longtime House Republican vented generally about voter perceptions of the package after Mr. Trump’s scathing critique.

“I don’t know if we recover from this,” said Representative Virginia Foxx, Republican of North Carolina, according to three officials on the call. “We will have a hell of a time getting this out of people’s head.”

Representative Don Bacon, Republican of Nebraska, said Mr. Trump had thrown House Republicans under the bus, according to a person on the call. In a statement afterward, Mr. Bacon said, “I stand by what I said,” adding that “the Covid supplemental is a good compromise, and the president should take it."

Focused first on the general election and then on baseless attempts to reverse its outcome, Mr. Trump has largely been sidelined from the negotiations, instead dispatching Mr. Mnuchin as his main emissary.

During a private meeting with top Republicans and top Democrats to discuss the emerging relief deal, Ms. Pelosi at one point pressed Mr. Mnuchin, on speaker phone in her conference room, four times to articulate the president’s position on direct payments. “Come on, Steven,” she said when he refused to say, according to one person familiar with the meeting, who disclosed it on the condition of anonymity.

Now, in undercutting the negotiations that Mr. Mnuchin led for the White House and throwing passage of the $2.3 trillion package into limbo with little warning to top Republicans on Capitol Hill, Mr. Trump has increased the likelihood that the party will bear the brunt of the blame for the continuing delay in providing relief to Americans.

The coronavirus relief package would provide the first significant infusion of federal aid since April, when Mr. Trump signed a $1.4 trillion government funding package. In rejecting it, the president would also derail some of his own priorities tucked into the measure, like funding for his wall at the southwestern border, funding for the Pentagon and an agreement to ban surprise medical bills, which his administration had previously urged lawmakers to pass. A number of the funding provisions Mr. Trump singled out in the catchall omnibus also aligned with requests he had made in his own budget proposal.

Republicans would again be forced to choose between their party’s leadership in Congress — Mr. McCarthy and Senator Mitch McConnell of Kentucky, who helped negotiate the final details of the stimulus deal — and a president known to savage anyone he views as disloyal.

Mr. Trump’s demands also provided a political gift to Democratic leadership, who have faced criticism for accepting a $900 billion relief package with $600 direct payments after months of pushing multiple multitrillion-dollar proposals that would have set the payments to twice that amount.

Answers to Your Questions About the Stimulus Bill

Lawmakers agreed to a plan to issue stimulus payments of $600 and distribute a federal unemployment benefit of $300 for 11 weeks. You can find more about the bill and what’s in it for you here.