Now part of the long list of women the president has insulted: a governor, a reporter, the head of General Motors and, of course, the House speaker. 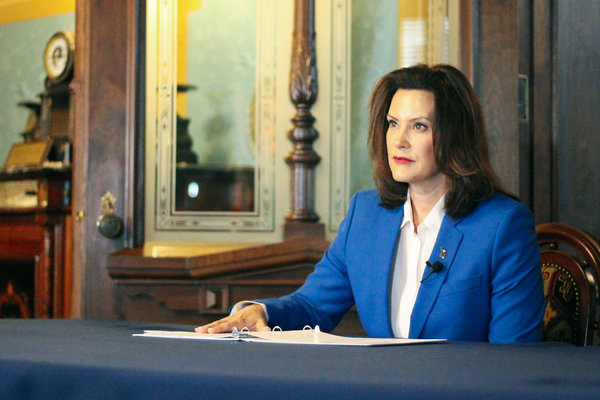 WASHINGTON — As he confronts a global pandemic, President Trump’s attention has also been directed at a more familiar foe: those he feels are challenging him, and particularly women.

“Always a mess with Mary B.,” Mr. Trump tweeted last week, attacking the female chief executive of General Motors, Mary T. Barra, as he accused the company of dragging its feet on producing ventilators. “As usual with ‘this’ General Motors, things just never seem to work out,” he wrote, “this” G.M. apparently referring to the one led by the first female chief executive of an American auto manufacturer.

At least he mentioned Ms. Barra by name. When it came to Gretchen Whitmer, Michigan’s Democratic governor, who delivered her party’s official response to his State of the Union address earlier this year and has been pushing for a national emergency declaration in her state, Mr. Trump did not acknowledge her by name.

“We’ve had a big problem with the young, a woman governor,” he said in an interview last week with Sean Hannity, the Fox News host. “You know who I’m talking about, from Michigan.” The president dismissed Ms. Whitmer, who has been pressing the federal government to provide more medical equipment to her state, noting that she was a new governor and it had “not been pleasant.”

In a tweet, he later referred to her as “Gretchen ‘Half’ Whitmer,” saying “she doesn’t have a clue.”

Ms. Whitmer, whom White House officials have privately criticized for showing her inexperience on the group conference calls with the president, has been relatively measured in her public criticisms of Mr. Trump.

In interviews, she said Michigan was not receiving “clear directives and guidance” from Washington, and that the federal government told her that if the state needed supplies, “we needed to go it ourselves.” On the calls, officials said, she has been corrected by Seema Verma, the administrator of the Centers for Medicare and Medicaid Services, about what waivers she had already been granted by the federal government.

But Tiffany Brown, Ms. Whitmer’s spokeswoman, said the governor was committed to maintaining a functional relationship with the federal government — even if that no longer included Mr. Trump. “Governor Whitmer has and will continue to have conversations with the Vice President and the head of FEMA,” Ms. Brown said in a statement.

As Mr. Trump has had to reverse himself on his overly upbeat assessments of how quickly he could reopen the country for business, he has also increasingly targeted some of his regular foils.

On Monday morning, in an interview with “Fox & Friends,” he referred to Speaker Nancy Pelosi as a “sick puppy” after she had appeared on CNN’s “State of the Union” and said the president’s early denials about the dangers of the coronavirus carried “deadly” consequences.

“As the president fiddles, people are dying,” Ms. Pelosi said.

In an interview on Monday, she rolled her eyes at his attack. “Every knock from him is a boost for me, quite frankly, so I don’t care what he says,” she said.

And at his Sunday evening news conference, Mr. Trump snapped at Yamiche Alcindor, a PBS NewsHour correspondent whom he has criticized publicly in the past, for asking him to defend his own statements about governors making requests for medical equipment like ventilators that he believes they do not actually need.

Ms. Alcindor tweeted in response that she was “not the first human being, woman, black person or journalist to be told that while doing a job.”

It was a sentiment echoed by Democrats, who said Mr. Trump’s pattern of singling out women for critiques ultimately takes a toll on him politically with female voters, even as it energizes some members of his base.

“Women see this and they’ve all been on the receiving end at some point in their lives,” said Cecile Richards, the former president of Planned Parenthood and a founder of Supermajority, a new women’s advocacy group. “When you actually poll women who did vote for him, they did it with enormous hesitation because of his bullying attitude towards women and his vulgar attitudes.”

Women who work for Mr. Trump have long defended the president’s treatment of women by noting that he is an equal opportunity counterpuncher, someone whose gut reaction to being insulted by anyone is to respond in kind. And the women closest to him, like his daughter Ivanka Trump or his former campaign manager Kellyanne Conway, now the White House counselor, have often pointed to their own experiences when pressed on Mr. Trump’s history of sexist attacks.

“I speak for many women who have and do work for him,” Ms. Conway said on Monday. “We are on equal footing with our male colleagues, even though some of those male colleagues have not always agreed. I feel empowered, respected and engaged.”

As for Mr. Trump’s recent attacks on women, Ms. Conway said the president responded when under attack “without regard to the immutable characteristics that seem to obsess so many who should otherwise put their full force and energy into Covid-19.”

Stephanie Grisham, the White House press secretary, added that “women rightfully fought for equal treatment for years, and there should not be special rules applied to what constitutes equal treatment.” She noted that she found it “funny how I never get these inquiries from men.”

In fact, the insults are hardly specific to gender. In the briefing room earlier this month, the president also pounced on Peter Alexander, a correspondent for NBC News, calling him a “terrible reporter,” and accusing him of asking a “nasty question” when Mr. Alexander asked the president to deliver his message to a fearful country. He has described Gov. Jay Inslee of Washington as a “nasty person” and a “snake” for criticizing the administration’s response to the virus.

But his attacks on women even as the country together faces a global pandemic have stood out, in part because they recall his dismissal of his 2016 Democratic rival, Hillary Clinton, as a “nasty woman,” and of many powerful women who have challenged him since.

“They’re all appalling,” Jess McIntosh, a Democratic strategist, said of Mr. Trump’s personal attacks on men and women alike. “The difference is that it’s easier to name the women he doesn’t attack. And the attacks become much faster and meaner when he himself is facing some kind of pressure and he lashes out at who he perceives to be the weakest person in the room.”