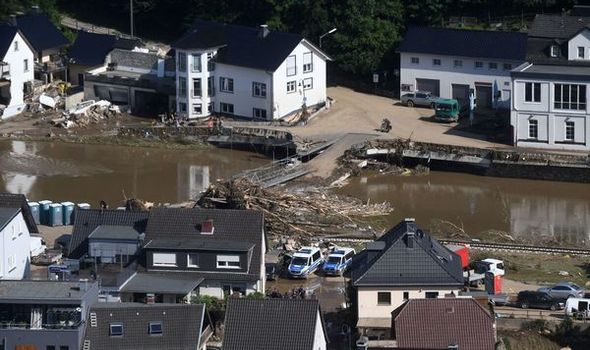 Some 1,500 people are feared to be missing after the crisis in Germany, Belgium and the Netherlands.

The army, police, firefighters and volunteers were desperately searching for survivors yesterday.

Hannah Cloke, professor of hydrology at Reading University, said a “monumental failure of the system” contributed to the human cost of one of the country’s deadliest post-war natural disasters.

Scientists had sent the German authorities a series of forecasts warning of an imminent disaster, it was said.

German Chancellor Angela Merkel spoke of the “unreal and horrific situation” in the region. She said there were “nearly no words in the German language for the horrific scenes” as she visited the badly hit Rhineland-Palatinate region.

Mrs Merkel pledged short-term relief to the victims, which she said would be launched on Wednesday.

Mrs Merkel said: “Germany is a strong country and we will stand up to this force of nature.

“One flood isn’t the example of climate change. But if we look at the loss events of recent years, decades, then they are simply more frequent than they were previously. So we must make a great effort.”

Floodwaters have now receded in Germany, Belgium and the Netherlands, allowing the clear-up operation to begin.

But officials are increasingly concerned the Steinbach reservoir’s dam could burst and engulf the North Rhine-Westphalia.

Police put the toll from the hard-hit Ahrweiler area of western Germany’s Rhineland-Palatinate state at 110 and said they feared the number may rise.

Flooding continued to wreak havoc in other parts of Europe on Saturday, including the Austrian region of Salzburg.