The Korean War began in 1950 and never officially ended. Here’s a timeline of key events during the decades-long war.

Seventy years ago, on June 25, 1950, North Korean troops invaded South Korea in a bid to reunite the two countries. At the time, the Korean Peninsula was divided along the 38th parallel – a split unprecedented in Korean history – with the Soviet Union backing Kim Il-Sung’s Workers Party in the North and the United States’ supporting Syngman Rhee’s government in the South.

The three-year war – pitting Soviet and China-backed northern troops against US-led United Nations forces – killed an estimated two million people and laid to waste cities and villages on both sides of the border.

It ended with an armistice between the US, China and North Korea, but South Korea did not agree, and no formal peace treaty was signed.

And 70 years on, the two Koreas remain technically at war. 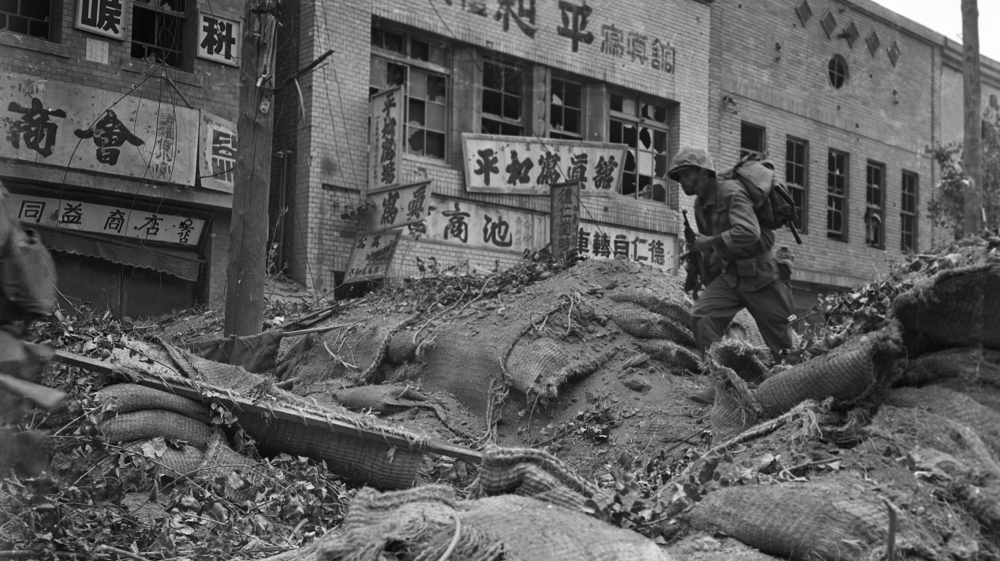 Inter-Korean relations remain tense, with the North often pushing matters to the brink by a series of provocative actions, including assassination attempts on the South’s leaders and the pursuit of nuclear weapons and ballistic missiles.

The long conflict has more recently been punctuated by dramatic diplomatic overtures, but the two Koreas are still no closer to lasting peace.

Below, we look at the most significant events in inter-Korean relations since the Korean War.

Following the signing of the armistice, the North, aided by the Soviet Union and China, recovered much faster than the South. But in the late 1960s, the South’s economy began taking off after Park Cheung-Hee was elected as president. Pyongyang, sensing its opportunity to reunify Korea could be narrowing, resorted to a series of provocative actions that included assassination attempts.

In a 1968 incident, known as the Blue House raid, the North dispatched a hand-picked team of 31 commandos to Seoul to kill Park. The soldiers, who wore South Korean army uniforms, managed to get within 100 metres of the South Korean presidential palace before they were intercepted. All but two of the soldiers either died or committed suicide.

There was a second attempt on Park’s life in 1974 by a suspected North Korean agent, but the bullet meant for Park hit his wife, and she died hours later in hospital.

In 1983, North Korean agents detonated a bomb at the Martyrs’ Mausoleum in Yangon, then the capital of Burma (now Myanmar), shortly before Park’s successor, Chun Doo-hwan, was due to arrive there. More than 20 people, including four South Korean cabinet ministers, were killed.

The Burma incident was not the only overseas plot carried out by the North.

In November 1987, a Korean Air flight from Baghdad for Seoul exploded over the Bay of Bengal, killing all 115 people on board. The bomb was allegedly planted by North Korean agents as part of a bid to disrupt the 1988 Olympic Games that were to be held in South Korea.

Four decades of animosities later, South Korea’s President Kim Dae-jung and North Korea’s leader Kim Jong Il met at a landmark summit in Pyongyang – the first meeting between the two countries’ heads of state since the start of the Korean war. 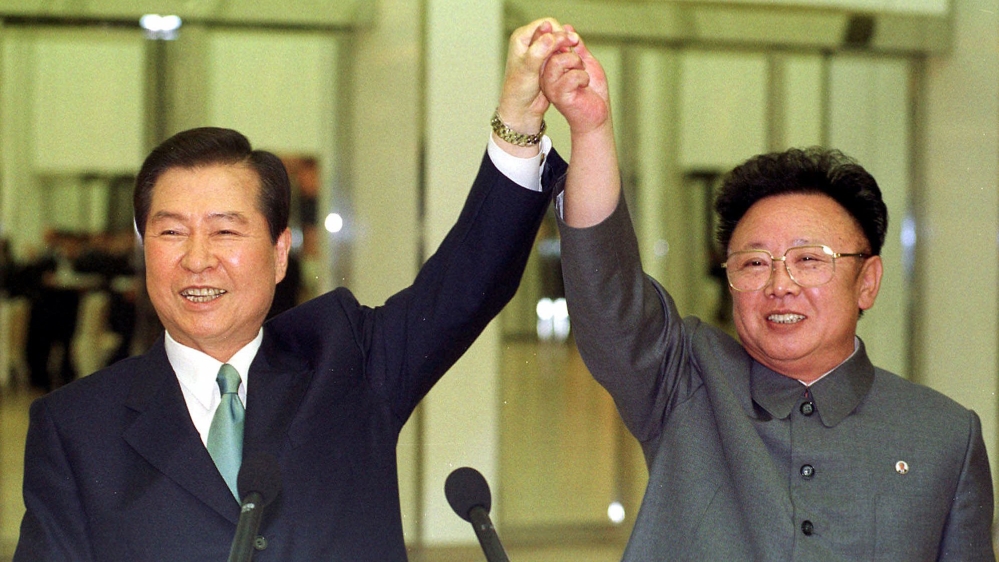 The summit came three years after a severe famine in North Korea that is estimated to have killed more than three million people, as well as a years-long spike in tensions between the two countries. Notable events include the North renouncing the armistice and deploying thousands of troops into the Korean Demilitarized Zone (DMZ) in 1996 and the South killing 24 North Koreans after their submarine ran aground off the coast of South Korea later that same year.

Many more South Korean and North Korean sailors died in 1999 when the two navies clashed on the Yellow Sea.

The meeting between the two Kims marked a turning point, however, paving the way for reopening of border liaison offices and family reunions. Seoul also granted amnesty to more than 3,500 North Korean prisoners.

Despite the historic summit, tensions on the Korean Peninsula ratcheted up in the 2000s amid the North’s push for nuclear weapons. In 2006 – three years after withdrawing from the Nuclear Non-Proliferation Treaty – the North conducted its first nuclear test, in a move that prompted the UN to pass sanctions banning trade in weapons and other goods with Pyongyang.

However, the following year, the North shut down its Yongbyon nuclear reactor after receiving 50,000 tonnes of heavy fuel oil as part of an aid package. A second inter-Korean summit was held in Pyongyang in October of 2007, and President Roh Moo-hyun became the first South Korean leader to cross the DMZ. 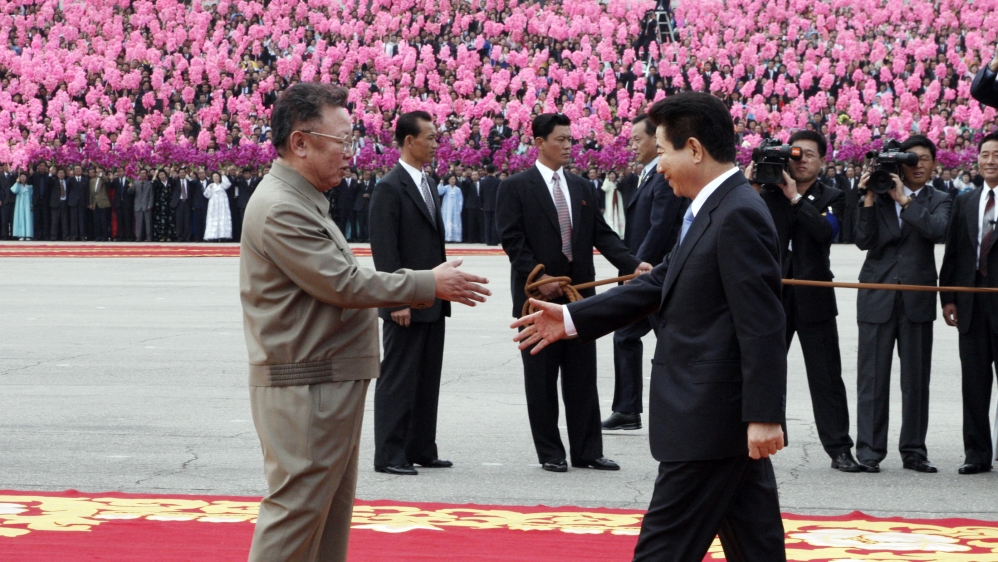 But relations plummeted once again with the election of Lee Myung-bak to South Korea’s presidency the next year. The new president, who had promised a tough stance on North Korea, ended Seoul’s policy of providing Pyongyang with unconditional economic assistance. That resulted in the North declaring an end to all military and political deals with the South.

In 2009, the North launched a long-range rocket and carried out its second underground nuclear test.

Frictions increased further in 2010, with Seoul breaking off all trade with Pyongyang in May after accusing it of sinking the Cheonan warship, an incident that killed 46 people.

In the ensuing decade, North Korea continued its nuclear build-up, conducting a third nuclear test in 2013 and prompting fresh UN sanctions. The North’s sole ally, China, banned exports that could be used in producing missiles and nuclear weapons.

But Pyongyang went on with missile tests and in 2015, confirmed that its Yongbyon nuclear plant was back in operation. Further defying UN sanctions, North Korea conducted its fifth and most powerful nuclear test in 2016, and the following year, it launched the first flight tests of an inter-continental ballistic missile – the Hwasong-14. 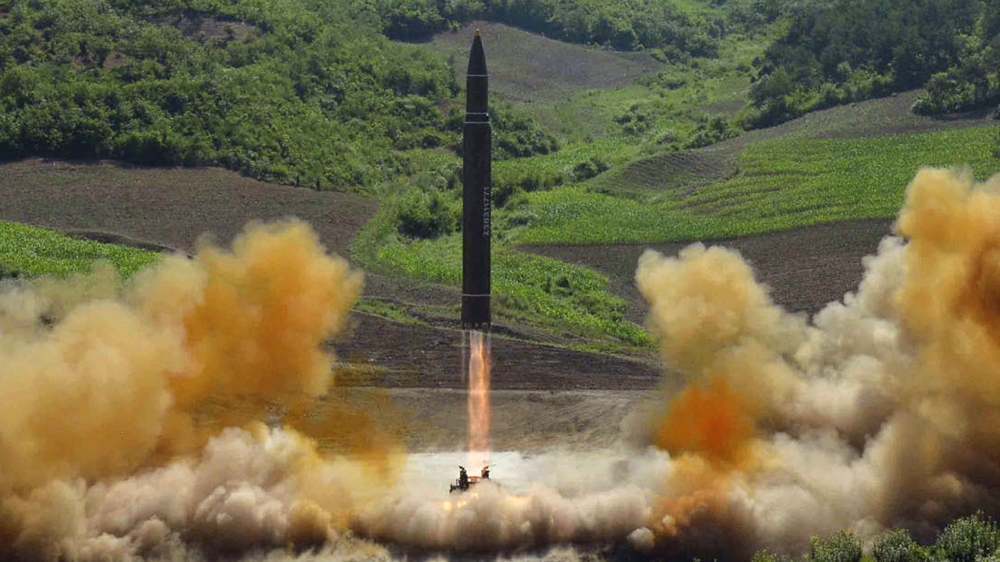 The year 2017 bought more tensions, with US President Donald Trump and North Korea’s Kim Jong Un engaged in an increasingly heated war of words. Trump threatened Pyongyang with “fire and fury like the world has never seen” and Pyongyang retaliated with a threat to attack the US Pacific territory of Guam – although it did not follow through.

But months later, in a dramatic thawing of tensions on the Korean Peninsula, the two Koreas agreed to march under the same flag at the February 2018 Olympic Winter Games in Pyeongchang in the South. 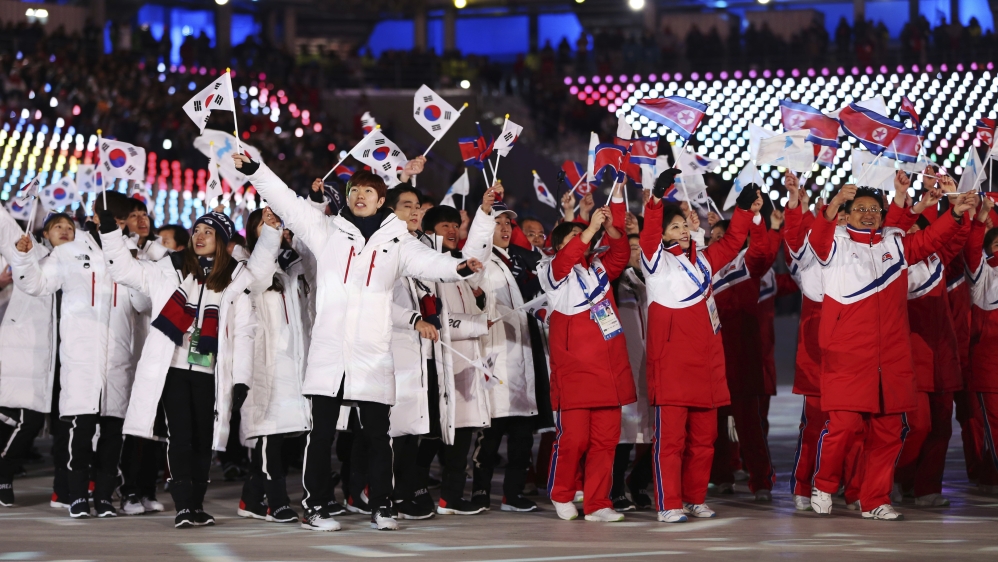 That was followed by a third inter-Korean summit, with Kim becoming the first North Korean leader to enter the South when he met President Moon Jae-in at the Panmunjom border crossing in April.

“I came here to put an end to the history of confrontation,” Kim told Moon, according to a South Korean official. The pair agreed to work towards denuclearising the Korean Peninsula, and their meeting paved the way for an unprecedented meeting between Trump and Kim. 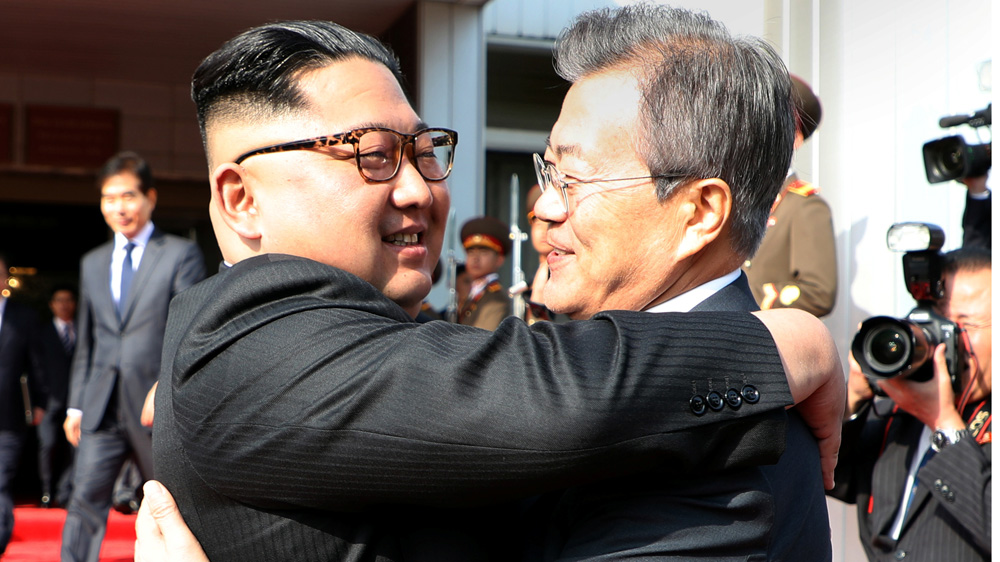 The Trump-Kim summit in Singapore that June was the first between US and North Korean leaders. They agreed to end the nuclear standoff, but a follow-up meeting in Vietnam the next year broke down, when Trump rejected Kim’s calls for major sanctions relief in exchange for partial denuclearisation.

The two leaders met once again at the Korean border in June 2019 and agreed to restart negotiations. But talks have stalled with the US demanding complete denuclearisation. 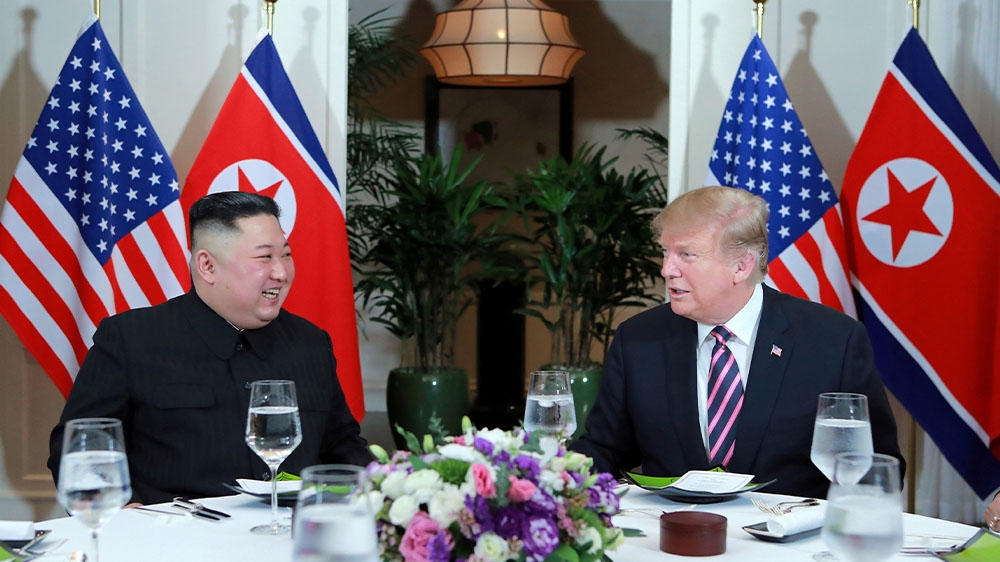 As North Korea is wont to do when it fails to obtain concessions from the US, it once again ratcheted up pressure on the South this month by blowing up an inter-Korean liaison office that was set up in 2018. 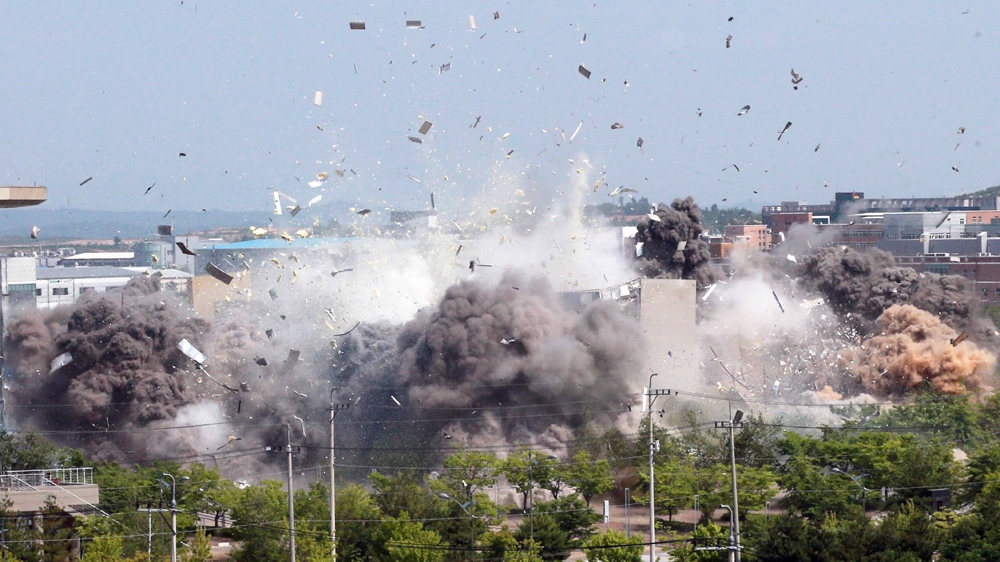 Pyongyang’s official news agency said the June 16 move was aimed at forcing “human scum and those who have sheltered the scum to pay dearly for their crimes” – an apparent reference to North Korean defectors who have sent leaflets criticising Kim’s nuclear ambitions across the border.

In a series of escalatory steps, Pyongyang then announced it was severing hotlines with Seoul and threatened to deploy soldiers to the border.

Then, on the eve of the 70th anniversary of the start of the Korean War, Kim pulled back yet again, saying the North will suspend military action against the South – a move experts say is aimed at extracting aid from the South and a bid to revive stalled talks.