At least 15 people have been killed after a “devastating” fire ripped through a Rohingya refugee camp in Bangladesh, the UN refugee agency has said.

At least another 400 remain missing, the UNHCR added. Seven deaths have been confirmed so far by police.

The fire tore through the Balukhali camp in the town of Cox’s Bazar late on Monday, destroying more than 17,000 shelters as people tried to save their meagre possessions. 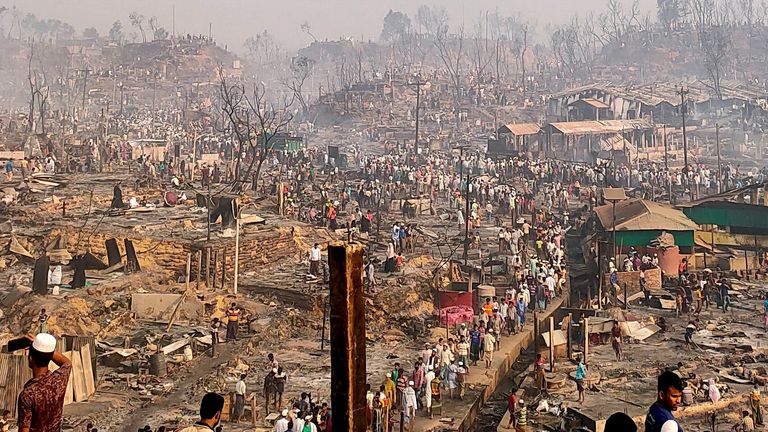 More than a thousand Red Cross staff and volunteers worked with fire services to extinguish the blaze.

The camp contains about 124,000 people – around one-tenth of an estimated one million Rohingya refugees in the area.

The vast majority of them fled Myanmar in 2017 amid a military-led crackdown.

“These people have been displaced two times. For many, there is nothing left,” said the head of the Red Cross’s delegation in Bangladesh, Sanjeev Kafley.

“It is massive, it is devastating,” said Johannes Van der Klaauw from the UNHCR. “We still have 400 people unaccounted for, maybe somewhere in the rubble.”

Rohingya refugee Aman Ullah commented: “Everything has gone. Thousands are without homes.

“The fire was brought under control after six hours but some parts of the camp could be seen smoking all night long.”

A senior police official, Zakir Hossain Khan, said the “cause of the fire is still unknown”. 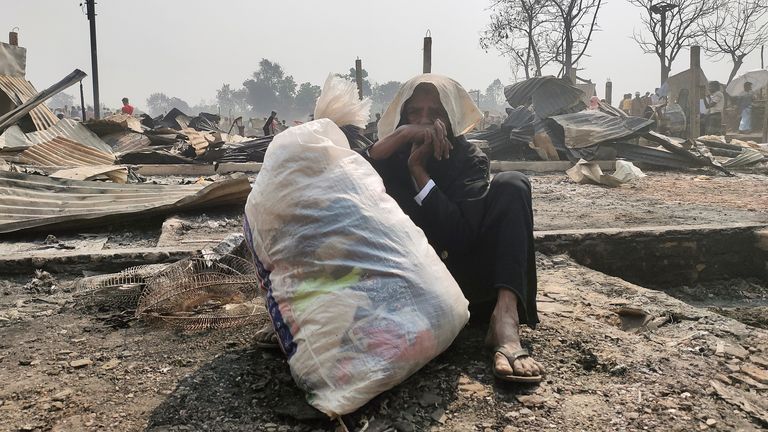 According to witnesses, some people may have been trapped by barbed wire fencing.

John Quinley, from Fortify Rights, an organisation working with Rohingya people, said he had heard similar reports, adding that fences had hampered the distribution of aid and services at the camp in the past.

“The government must remove the fences and protect refugees,” Mr Quinley said.

“There have now been a number of large fires in the camps including a large fire in January this year.

“The authorities must do a proper investigation into the cause of the fires.”