BBC Weather: UK set for snow as temperatures plummet to -10

The UK faces several days of heavy snow, according to the latest BBC weather forecast. The BBC’s Carol Kirkwood has warned “more rain and significant snow are certainly on the cards throughout this week”. She told BBC Breakfast viewers that the amount of snow is “likely to lead to some disruption”.

This comes as the Met Office warned that as much as 40cm of snow could fall in some parts of Scotland on Wednesday.

Ms Kirkwood explained: “Throughout this week there will be more rain and snow, some of that will be significant snow particularly so across Scotland.

“Talking about being cool, the temperature is as low as -10.1C in Scotland right now, so across parts of Scotland and England it is a cold start, a frosty start, and there is a risk of ice.”

The Met Office confirmed that overnight minimum temperatures reached as low as -13C in Braemar, Scotland. 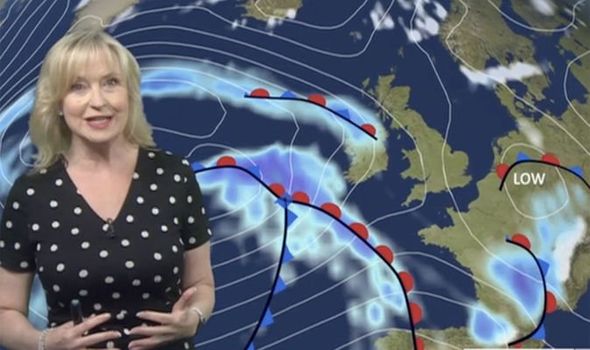 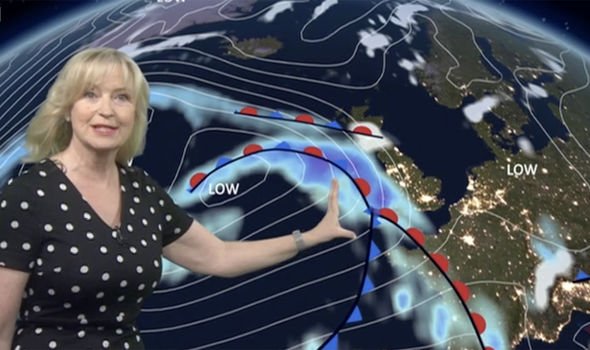 She continued: “Today you can expect some wintry showers. We have some already across the north and east of Scotland, and that will move down to low levels in the north-east of England.

“It will also be milder in the south for a time. We will see temperatures get back into double figures – but it’s not going to last, it will get colder again later in the week.

“For the south this morning it is cloudy, murky, damp and misty across Wales and England.

“There is a clutch of weather fronts from the Atlantic that will bring in some rain and some snow as we move overnight.

“The wind will also pick up as it approaches this evening. 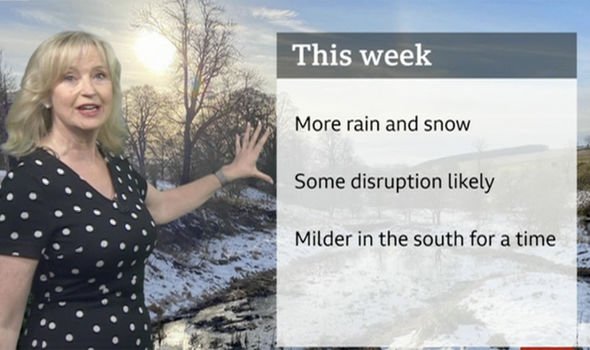 “Maximum temperatures today will range from 2C in the north to 9C further south across the country.”

On Tuesday, Ms Kirkwood explained that “the snow could even reach the Midlands and for a time into East Anglia on Tuesday morning”.

However, she added that “eventually, the rain, sleet and snow will become confined to northern England and also Scotland”. 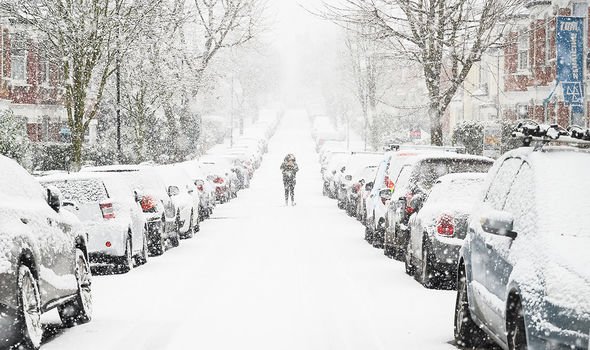 In the south, the BBC weather presenter said: “We will see a plethora of showers coming in across southern England and Wales – some of those will be heavy and thundery.”

The Met Office has issued a flurry of snow weather warnings for the next three days, with up to 40cm of snow expected to blanket the Grampian Mountains on Wednesday.

The Met Office’s Sarah Kent warned: “If you add these totals up, you begin to get an idea how extreme conditions are going to be.”

The warning states: “Further spells of snow, heavy at times, will continue to affect parts of northern England and Scotland during Wednesday.

“Snow is most likely to fall on higher ground, mainly above 200 to 300 metres.

“Significant accumulations of 10 to 20 cm are possible, perhaps as much as 40 cm across the Grampians.”