BBC Weather forecaster Carol Kirkwood said the UK can expect settled but cold weather over the next few days. She noted that there will be thick fog forming for much of England and Wales Thursday and Friday. She added that temperatures will be very cold for many areas, with many parts of the country seeing freezing temperatures over the next couple of mornings.

She added these cold spells will be expected into the weekend as well.

Ms Kirkwood said: “It is a cold start, in parts of East Anglia, in Marham it is -1C at the moment.

“Cardiff, Birmingham and Inverness it is freezing for you at 0C.

“Belfast it is 4C and Guernsey it is 10C and the reason for that is there is a weather front which has been producing a fair bit of cloud and some rain as we have gone through the night. 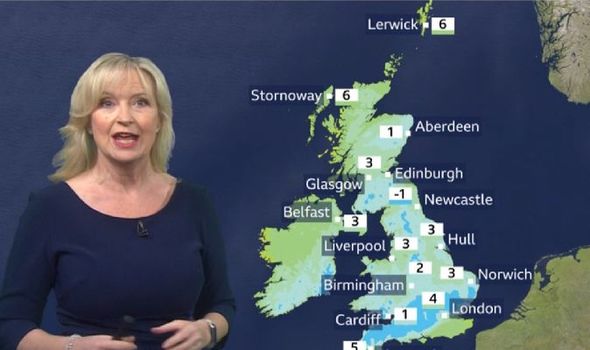 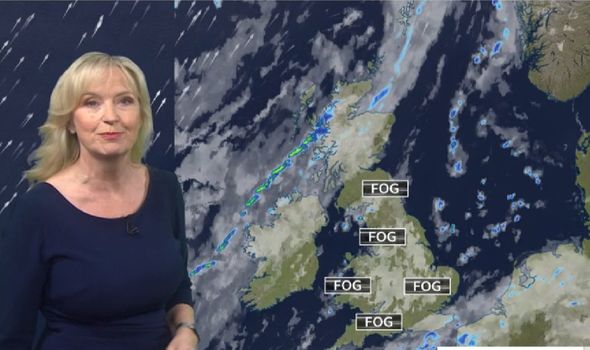 “It has been draped across the Channel Islands and also the southeast.

“High pressure is firmly in charge and there is hardly a breath of wind, it is fairly settled and there is some frost, there is also some fog.”

The BBC Weather forecaster explained how the fog is expected to linger throughout the day as the temperatures remain low.

She said: “Some of this fog will be slow to clear and only lift into the low cloud in areas like the Midlands and Lincolnshire. 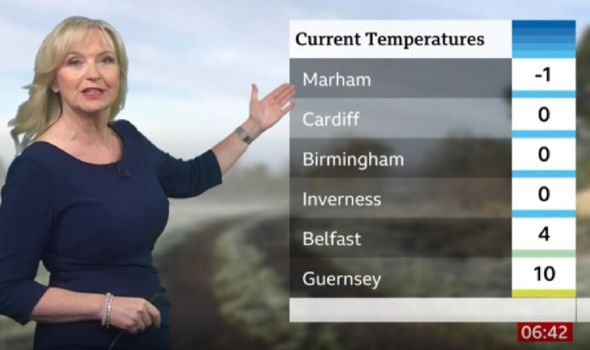 “Temperatures today ranging from seven in the north to generally nines and 10s in the south.”

Ms Kirkwood also warned more dense fog on Friday morning as temperatures remain freezing for many parts of the country.

She said: “Clear skies will see some fog forming and some of that is going to be dense, particularly so across England and Wales. 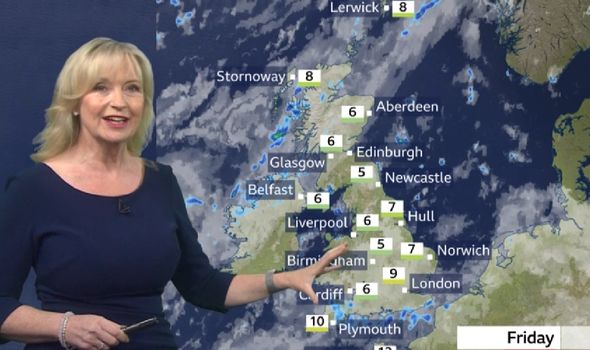 “As well as that it is going to be a cold night as these temperatures here represent towns and cities, while in rural areas we will see a lot of freezing temperatures or just above or below.

“So there will be some frost and once again some freezing fog.

“Where we have got the cloud and the rain from the weather fronts, temperatures won’t be as low.”

Ms Kirkwood closed by saying that both the north and south of the UK will be impacted by two weather fronts bringing some rain while in between there will be some sunshine and cold temperatures.