BBC Weather: Temperatures to soar for ‘hottest day of the year’

Britons are set to bask in the country’s hottest temperatures of the year so far across the next two days. Temperatures will soar to 29C later today and they could go even higher on Monday as temperatures pass the 30C mark. However, the latest BBC weather forecast shows an influx of rain and the risk of thunderstorms on Wednesday that could disrupt the UK heatwave.

BBC meteorologist Matt Taylor told BBC Breakfast viewers: “While some of us have some sun to start the day, there is some cloud around.

“That cloud is helping things be quite humid across parts of western Scotland, and Northern Ireland, with temperatures up to 15C to 16C.

“There is also a nice fresh start along eastern areas this morning before the temperatures rise markedly.”

He pointed out that Northern Scotland and the Orkney islands are the “big exception today” with the forecast showing cloud, windy and outbreaks of rain. 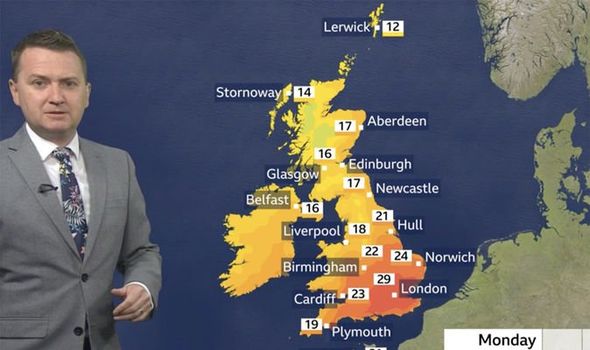 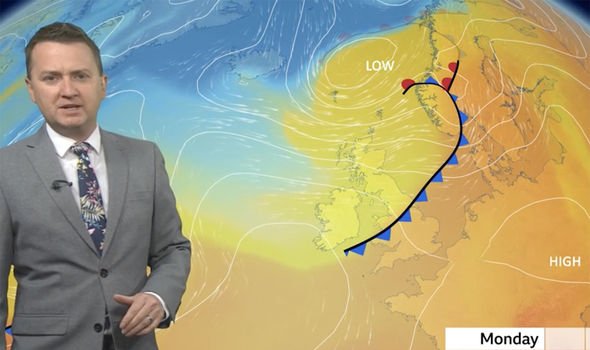 Mr Taylor continued: “It is going to be the hottest day of the year so far with 28C to 29C in the south-east corner of the country.

“Temperatures could get to 26C in eastern Scotland. Overnight it will be a muggy humid night across the south.

“On Monday, a zone of cloud will stretch across the Midlands. Temperatures to the north of that area of cloud will drop back down to where we should be for this time of the year.

“But we could be even hotter tomorrow in the south-east corner, with 29C to 30C – and maybe even a little bit more than that.” 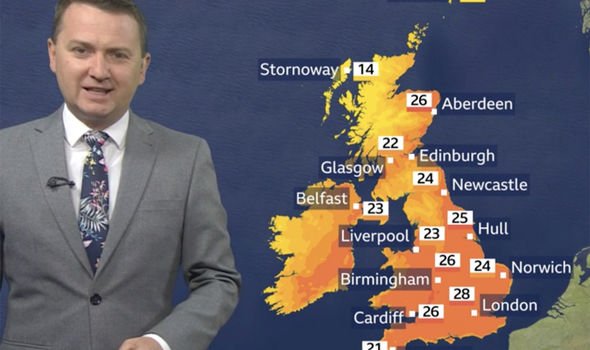 However, he warned that thunderstorms could cut this heatwave short.

Mr Taylor told BBC Breakfast viewers: “On Tuesday, outbreaks of rain will reach the UK overnight, drawing in some very muggy conditions across England and Wales.

“We could finish Wednesday with some big thunderstorms around as temperatures drop across the country.”

Temperatures in the UK will be hotter than holiday hotspot destinations in Ibiza, Mykonos and even California. 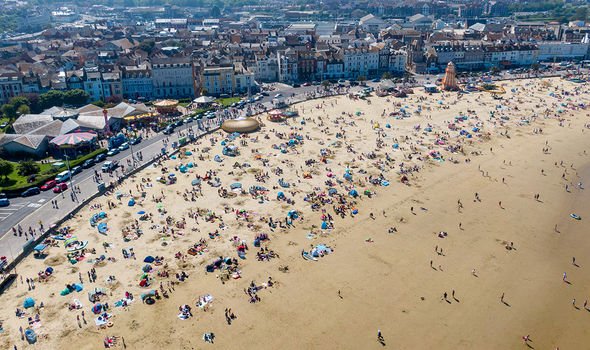 This will see football fans enjoy warm weathers as England take on Croatia at Euro 2020, as Mr Taylor urged those going to the match to bring plenty of water.

The AA has warned parents and animal-owners to make sure their children or pets are not left in locked cars.

The hot weather today could make it the warmest 13th June on record.

The highest temperature recorded so far this year was 28.3C in Northolt, north-west London, on 2 June.