BBC Breakfast reported how the bad weather is set to continue for much of the UK on Saturday and into Sunday as a low-pressure front brings in a barrage of rain and wind which will hit western areas of the UK. There will be some sunshine and drier conditions in eastern areas but this will be accompanied by blustery winds. Saturday evening will see temperatures plummet as Sunday temperatures drop further to the early teens. Monday will see yet more bad weather but temperatures are on the up as we head towards the Bank Holiday weekend.

She added: “Through the day it is going to be drier and brighter and crucially less windy than recent days.

“Still a bit breezy in the east but those winds are dying down over the course of the day because low pressure is moving off to the east.

“It is pushing its way eastwards but still close enough to bring some breezy conditions.” 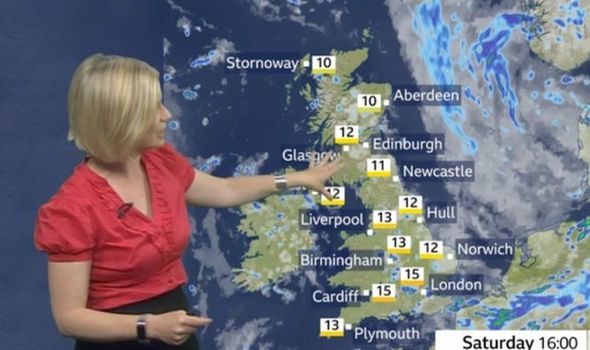 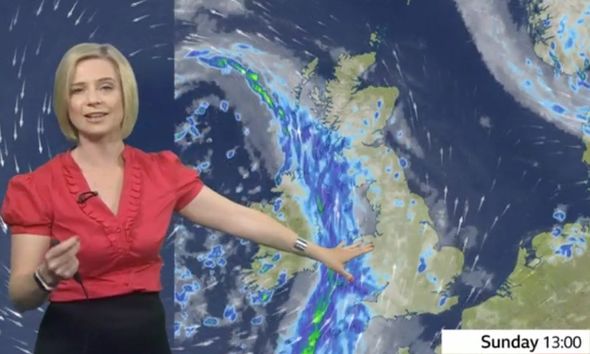 But she stressed: “There will be some showers across Northern Ireland, central and eastern England and one or two for Scotland as well.”

Ms Keith-Lucas said temperatures are “still not that great for this stage in May” as Saturday will see highs of 15 degrees in London, 15 in Cardiff, 13 in Plymouth, 12 in Norwich, 12 in Edinburgh and 11 in Newcastle.

She added: “Still a few heavy showers in the east as we head into the evening.” 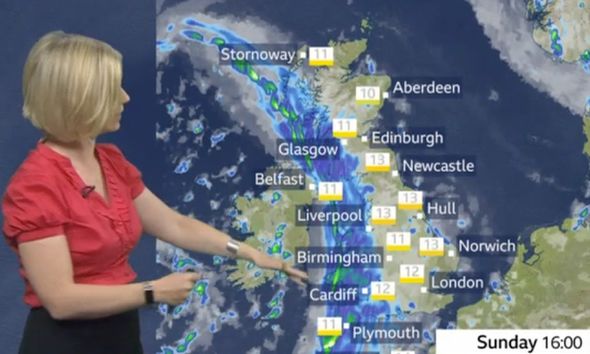 But these showers will fade away we head into Saturday night and she warned under the clear skies it will be a “chilly night” with a “touch of frost” in parts of Scotland and northern England.

Newcastle could fall to a chilly 2C degrees as we head into Sunday morning.

For Sunday, the BBC presenter said: “Clear and dry for many of us to start the day but more rain waiting in the wings due to another area of low pressure that will sweep in on Sunday.

“Turning breezy especially later on in the day but for eastern Scotland and much of eastern England you should have quite a lot of dry and sunny weather.” 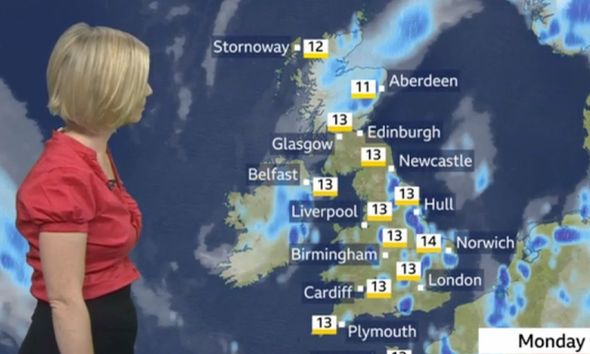 Ms Keith-Lucas went on to explain: “The rain will be quite heavy later in the day working into Northern Ireland, Wales and pushing into central parts of England and Scotland later in the afternoon” adding “but the east of that should hold onto dry and bright weather with perhaps one or two showers.”

Monday will see lingering patches of rain in parts of Northern Scotland “but there will be sunshine and blustery showers elsewhere.”

And temperatures on Monday will see highs of 13 degrees across most the United Kingdom while Aberdeen will drop to 11 and the north of Scotland.

She said” “through the week ahead, little bit up and down, but a hint things could turn a little bit drier and warmer as we head towards the Bank Holiday weekend” as London is expected to hit 19 degrees on Friday.