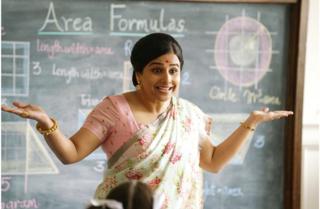 Indian math wizard Shakuntala Devi, often described as a “human computer”, is the subject of a new film that premieres on streaming giant Amazon Prime Video on Friday.

Bollywood actress Vidya Balan, who plays the math genius, has described her as a “small-town Indian girl who took the world by storm”.

Shakuntala Devi’s dazzling skill with numbers earned her a place in the Guinness Book of World Records and turned her into a minor globe-trotting celebrity.

In the official trailer of the eponymous biopic, Balan is seen cheekily asking a roomful of people whether she should “give the answer from the left to right or from right to left” when asked to multiply two multiple-digit numbers.

A video of the real-life Shakuntala Devi doing the same in an interview with Canada’s Asian Television Network (ATN) has been watched more than half a million times since it was uploaded in April 2013 when she died at the age of 83.

Balan told the BBC that she too had watched it while prepping for her role.

In the video, the questioner, a math student from a Canadian university, says “it will take three minutes for a calculator to give the answer” – Shakuntala Devi does it in seconds.

“She had no formal education but she could perform the most complex calculations in her mind with astonishing speed, she was faster than the fastest computer,” Balan told me over the phone from Mumbai.

In her interviews, Shakuntala Devi said she was “doing mathematical calculations from the age of three in my head” and that her father, a circus artist, discovered her felicity with numbers while playing cards with her when he discovered that she was beating him not by cheating but by memorising the cards.

“It’s god’s gift, a divine gift,” she said whenever she was asked to explain her extraordinary mathematical skills.

At the age of six, she first displayed them in a public performance in the city of Mysore in Karnataka, the southern state where she was born.

She taught herself reading and writing and for decades travelled around the world, doing impossibly complex mental calculations before audiences in universities and theatres and in radio and television studios.

In 1950, when she participated in a BBC television show, her answer to a problem differed from the host’s. That was because, as she pointed out, there was a flaw in the question. She was proved right when experts re-examined the numbers.

In 1977 in the American city of Dallas, she beat Univac, one of the fastest supercomputers ever built.

And for her 1982 Guinness Book record, she multiplied two 13 digit numbers, randomly picked by a computer, in front of an audience of 1,000 at the Imperial College of Science and Technology in London. She took 28 seconds, including the time to recite the 26-digit answer.

Balan says besides being a math genius, Shakuntala Devi also had an alternate career as an astrologer. She wrote books on astrology, cookery, math and crime. She also wrote a book calling for decriminalising homosexuality which in the 1970s was a big deal not just in India but in most parts of the world.

“She was so many things. She lived life on her own terms, she was unafraid, totally unapologetic about it and to think that was 50 years back.”

Balan says two years back when director Anu Menon met her and “I heard about all the ups and downs in Shakuntala Devi’s life, I said, ‘Oh my god!’ This is a film waiting to be made”.

She prepped for the role by watching lots of videos, read all the articles that had been published about her and accounts of Anupama Banerji, Shakuntala Devi’s only daughter who lives in London with her family.

“It all gave me a glimpse into her life. What truly fascinates me is that you wouldn’t normally associate a fun person with math and she completely turns that perception on its head.

“She played with numbers, you see a kind of joy when she did math, she had so much showmanship, she enjoyed performing. It was all so unusual for a mathematician because math is generally considered a boring and dry subject.”

Boring and dry are not words usually associated with Shakuntala Devi. In a 1990 study, Arthur R Jensen, a researcher on human intelligence at the University of California, Berkeley, described her as “alert, extroverted, affable and articulate”.

But despite her gregariousness, she had “deep-seated unhappiness”, says journalist, filmmaker and former MP Pritish Nandy.

“Some of it was personal,” he told the BBC, “but the most important was that she had a skill and she couldn’t monetise it.”

In interviews, Shakuntala Devi had talked about how as the child prodigy she was often under pressure to earn money as the sole breadwinner for her family and later in life due to her marriage to a closeted gay man.

Mr Nandy, who was one of India’s most prominent editors in the 1980s, says Shakuntala Devi would visit him whenever she was in Mumbai and that he got to know her well.

“She didn’t quite figure out where her talent came from,” he says. “I would always ask her, ‘Can you delve deep into your head and find out how you do it?’ And she would always say, ‘It comes to me naturally’.

“She didn’t know why she was brilliant. What was tragic was no one else was interested in finding out either.”

Mr Nandy says she was worried that she was not able to monetise her extraordinary skills.

“Being a genius doesn’t necessarily help, she always complained that she didn’t get too many shows. But by then, her talent was seen as a freak show, not as a skill,” he says.

“She was at a loose end, the numbers’ whiz was forgotten. She’d lost a bit of her confidence. She was moving towards astrology and she was scrambling to make a living. She tried to do a hundred other things, including contesting parliamentary elections, but none of it came to much.”

Bollywood biopics usually end up being hagiographies, but Balan promises this is different. She does not want to give away too much of the plot, but says theirs is “a warts-and-all biopic”.

Balan says she’s hoping the film will entertain people at a time when everyone is stuck at home because of the pandemic.

“I’m also hoping it will bring about a change in the way we teach math, make it more interesting, take away the fear of the subject and inspire more people to take it up.”