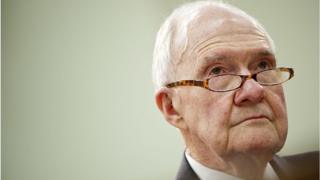 Lt Gen Brent Scowcroft, a statesman who steered US national security policy for decades, has died of natural causes at the age of 95 in his Virginia home.

Scowcroft was National Security Adviser to Presidents Gerald Ford and George HW Bush – the only person to serve two administrations in the role.

In his more than 40-year tenure in Washington, he led US policies towards Russia and during the 1991 Gulf War.

He received an honorary knighthood from Queen Elizabeth II in 1993.

Scowcroft passed away on Thursday in his home in Falls Church, a Bush family spokesman said.

Scowcroft was a career public servant – a soldier-scholar with a career spanning 60 years in the military and government service.

He advised US presidents from Richard Nixon through Barack Obama, and was a friend and confidante of President George HW Bush. His protégés include George W Bush-era Secretary of State Condoleezza Rice and Defence Secretary Robert Gates.

He was one of the most notable high profile Republicans to oppose the Iraq War in 2002 during the George W Bush presidency after the September 11 terrorist attacks.

Described as soft-spoken and gentle but tough, Scowcroft helped shape US actions after the collapse of the Soviet Union as well as the response to China in the wake of the Tiananmen Square protests in 1989.

He operated on a philosophy he described as “enlightened realism”, focusing on strategy and establishing US global leadership by working through coalitions and allies.

Scowcroft urged a US military response when Saddam Hussein invaded Kuwait in 1990 and was behind Operation Desert Storm. He also cautioned against ousting the Iraqi leader at the time. Scowcroft was awarded the presidential Medal of Freedom for his work relating to the Gulf War.

He was born in Ogden, Utah in 1925 and graduated West Point in 1947. In 1967, he received a doctorate in International Relations from Columbia University.

Scowcroft served a number of roles in the US Air Force, including leading the Political Science Department at the Air Force Academy, Special Assistant to the Director of the Joints Chiefs of Staff and as Military Assistant to former President Nixon.