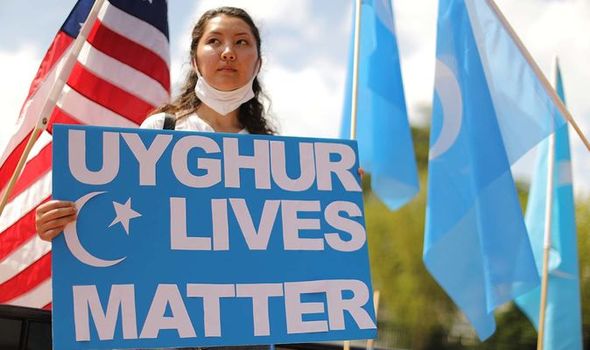 He warned that the Uyghurs are being targeted in “an effort to intimidate them into silence, force them to return to China, or co-opt them into providing information on other Uyghurs”.

Mr Malthouse urged anyone approached to report it to police.

The Home Office says it does not have any data on how many people have been targeted.

But it comes after MPs said in April that Uyghurs and other ethnic and religious minorities in China’s Xinjiang province were facing genocide.

And more than 40 countries, including the UK, US, Canada, Australia and New Zealand – criticised China at the UN.

Foreign Secretary Liz Truss also reportedly accused China of genocide in a meeting with the UK’s ambassador to the country Caroline Wilson.

Mr Malthouse told Labour MP Stephen Kinnock: “We will continue to work closely with our international allies to protect Uyghurs and other minorities resident in the UK.” Ms Truss’s predecessor Dominic Raab earlier this year announced Britain was imposing sanctions along with the EU, US and Canada against China in response to human rights abuses.

It called for China to allow immediate and unfettered access to Xinjiang for independent observers.

One Chinese defector has told how Uyghurs are transported in their hundreds on packed prison trains for two days to “re-education centres”.

The man, who said he served as a police officer, told Sky News: “We gather them together, put hoods on their head, two people handcuffed together, to prevent them escaping.

“During the transportation we do not give them food.

“They are only allowed bottle caps to drink water. To keep order, we don’t let them go to the toilet.

Beijing has described claims of human rights abuses in Xinjiang, in the north-west of China, as “the lie of the century” and insisted people there live happy lives.