China’s alliance with the EU has attracted international attention recently after the two agreed to an investment deal back in December. This astonished the incoming Biden administration — it’s no secret that there are underlying tensions over trade between the US and China. US President Joe Biden had hoped to adopt a shared approach towards Beijing with the EU, in a move which would reignite transatlantic relations and help reduce China’s growing power.

When the EU subsequently announced it had agreed to the Comprehensive Agreement on Investment (CAI) with Beijing — despite pleas from the Biden camp to wait until the President-elect was in office — it signalled a step away from the US.

However, it seems the controversial new deal, which was seven years in the making, almost fell through.

Negotiations between China and the EU were even considered dead in the water when the summit was postponed due to the coronavirus pandemic last September, according to former aide to George W Bush, Peter Rough.

Yet, Mr Rough claimed relations were reanimated when President Xi took action shortly after Mr Biden was announced as the victor of the US Presidential election in November. 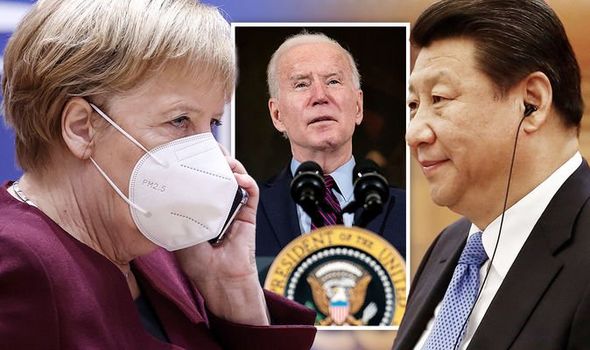 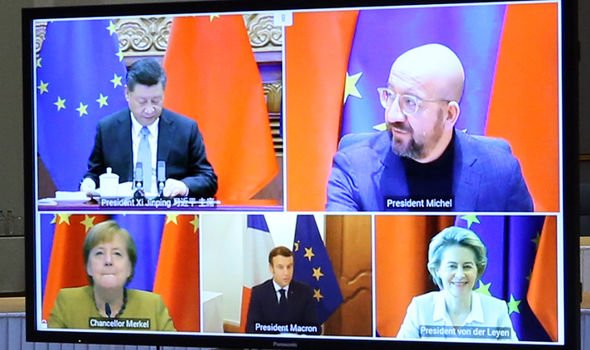 “The day after Joe Biden’s first phone call with Angela Merkel as President-elect, Xi Jinping followed-up with a conciliatory call to Berlin of his own.

“The purpose of his intervention?

“To give the CAI fresh impetus and split Europe from the US.”

By increasing the rift between the US and the EU, President Xi is helping to break up a transatlantic approach which could put pressure on China to alter its plan to expand its power.

Mr Rough claimed China’s new deal is particularly alluring to Germany’s industrial sector, which is considered the backbone of the EU’s economy.

By calling Mrs Merkel, President Xi reminded the most influential figure in the bloc how China could give Germany in particular a much needed boost. 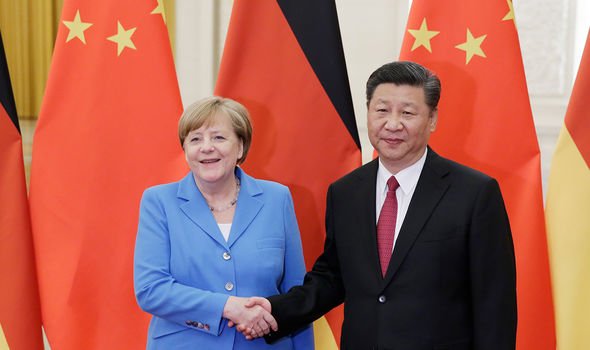 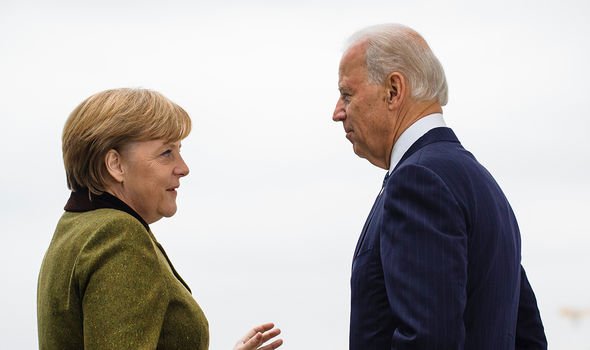 Indeed, the EU noted that China was in a hurry to secure the deal before Mr Biden was sworn into office, so the bloc managed to bag a few token concessions in the process.

However, Mr Rough wrote in his February paper for the Hudson Institute, ‘Europe’s China Chimera’, that the new agreement is still a “poisoned chalice”.

He explained: “In the short run, the investment agreement may strengthen Germany, but in the long run, it poses a real danger to its health.

“It does not address China’s underlying transgressions because it undercuts the transatlantic approach, which is the only way Europe can marshal the strength to enforce any agreements’ commitments.”

He also warned that the deal had been enriched with “jewels” which many experts fear are fake.

He noted: “China is interested in Europe as a means toward self-sufficiency, not interdependence.”

Mr Rough also remarked that the Chancellor’s decision to allow Chinese technology firm Huawei to access Germany’s digital networks is especially alarming, as it will provide Beijing with a stronghold in the country. 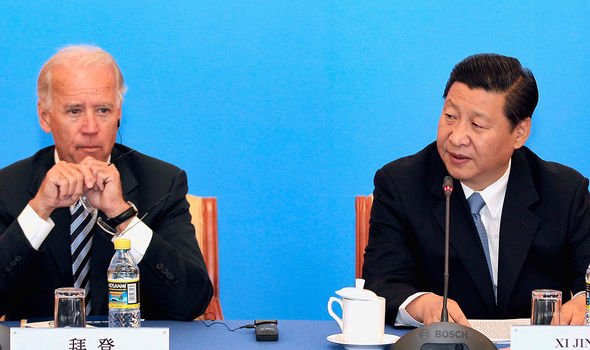 POLITICO’s Matthew Karnitschnig even claimed that the deal was the equivalent of the EU giving the new Biden administration a “one-finger salute”.

This is especially surprising considering Mrs Merkel concluded last year: “Europe can’t defend itself on its own. We are reliant on this transatlantic alliance.”

Yet, other EU officials justified the new deal as an attempt to become an independent and strong power, which would only help it become a better ally to the US.

European Commission President Ursula von der Leyen claimed last year: “It is not possible to shape the world of tomorrow without a strong EU-China partnership.”

Even so, to many in the West, the new deal signalled that the bloc was deliberately turning a blind eye to China’s worrying treatment of both Hong Kong, where the region’s democratic society is being increasingly restricted, and Uighurs, who are allegedly facing systemic abuse in China. 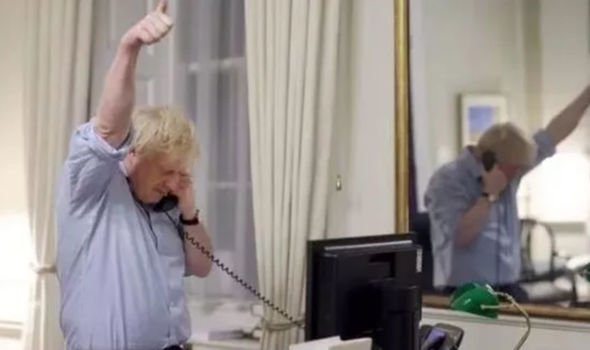 This is also not the first time a phone call between world leaders has hinted at fluctuating allegiances in recent months.

Mr Biden chose to call Prime Minister Boris Johnson first out of all the European leaders shortly after his January inauguration.

This appeared to show Mr Biden intended to prioritise the UK over the EU in future deals, and even raised hopes of imminent trade talks between Britain and the US.

However, this early excitement from Downing Street ebbed away when Washington released a statement summarising what the world leaders had talked about — and left out any mention of a future trade agreement.