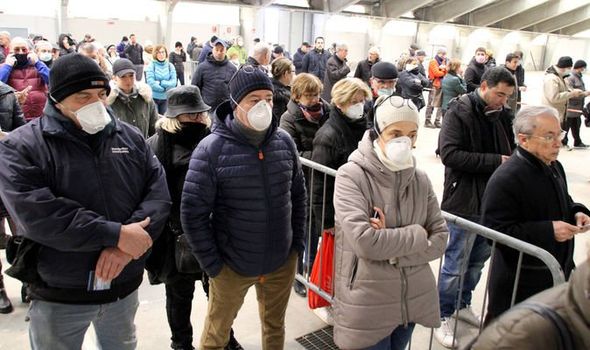 The Italian Government will adopt tough new measures to try to limit the spread of the deadly disease, which includes telling people not to enter or leave the heavily-hit district in Milan, according to a draft decree seen by Reuters. Currently, just a few areas of northern Italy, also known as “red zones” “ have been quarantines. But in a dramatic move the draft tells people people not to enter or leave Lombardy or 11 provinces in other regions.

In the areas covered by the decree, including towns in the regions of Emilia-Romagna, Veneto and Piedmont, schools will be closed until at least April 3.

In addition, all museums, gyms and swimming pools will be also be closed, while leave is being cancelled for care workers.

The head of the Civil Protection Agency Angelo Borrelli said earlier the new legislation is expected to be approved later on Saturday.

Government data has shown the northern regions of Lombardia, Emilia

Romagna and Veneto have been hit hardest by coronavirus, representing 85 percent of cornfirmed cases in Italy and 92 percent of recorded deaths.

The latest steps come after the number of coronavirus cases in Italy, which is European’s worst-hit country, surged by more than 1,200 in a 24-hour period – the biggest daily rise since the epidemic began two weeks ago.

Mr Borrelli said on Saturday there were a further 36 deaths from the deadly virus, with the total now standing at 233.

The number of confirmed cases in the country has now leapt to 5,883 from the 4,636 announced on Friday.

Coronavirus has largely been focused on a handful of areas in northern Italy.

But cases have now been confirmed in each of the country’s 20 regions, with deaths recorded in eight of them.

Mr Borrelli said: “We will win this battle if our citizens adopt a responsible attitude and change their way of living.”

On Friday, the Government approved a plan to employ up to 20,000 new doctors and nurses to respond to the emergency.

National Health Institute chief Silvio Brusaferro said the average age of patients who have died after being infected by coronavirus was over 81.

He added they were predominantly male, with more than 80 percent suffering from more than two underlying health conditions.

On Friday, it was reported the number of people in intensive care surged more than 30 percent on Friday to 462.

But authorities said 523 people have full recovered after being diagnosed with coronavirus – up by more than a quarter (26 percent) on the previous tally.

There are now fears the hugely accelerating coronavirus outbreak will push Italy’s already fragile economy into its fourth recession in just 12 years.

On Friday, Credit ratings agency Moody’s cut its growth forecast for the country to -0.5% in 2020, from a previous +0.5% estimate.

The Milan stock exchange also plunged 3.5 percent and has sunk a huge 17.4 percent since news of the first coronavirus case was announced on February 21.

Italy is also furious at EU superpowers such as France, Germany and other allies of the bloc, who have stopped the export of protective medical gear to avoid shortages in their own countries.

Matteo Salvini, head of the far-right Lega party, said: “So much for the European Union.

“When Italy needs help, doors are closed and wallets shut.

Once the health emergency is over, it will be necessary to rethink and rebuild everything, starting from Brussels.”