Austria halted all train services to Italy, the most affected country in Europe, after two rail passengers travelling from Venice to Munich last night were suspected of being infected with the deadly flu-like virus. Trans-Alpine services over the Brenner Pass resumed this morning after the travellers tested negative but officials are closely monitoring the situation in Italy where more than 150 cases of coronavirus have been conformed and the death toll stands at three. 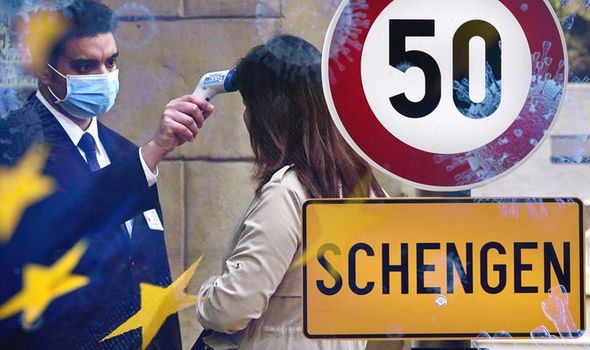 The outbreak prompted the Italian prompting the government to close off the worst-hit areas in the northern regions of Lombardy and Veneto.

Prime Minister Giuseppe Conte said his government wanted to uphold the freedom of movement and no restrictions were planned for the time being but he could not rule our further suspensions in the future.

French junior transport minister Jean-Baptiste Djebbari said he saw no need to close down transport borders between France and Italy, despite the spread of coronavirus.

Mr Djebbari said: “Closing down the borders would make no sense, as the circulation of the virus is not just limited to administrative borders.”

SCROLL DOWN FOR CORONAVIRUS LIVE UPDATES

Health officials in Kuwait and Bahrain have confirmed their first new coronavirus cases.

Kuwait detected the virus in three people among 700 who had been evacuated on Saturday from the northeastern Iranian city of Mashhad.

The health ministry identified them as a 53-year-old Kuwaiti man, a 61-year-old Saudi man and a 21-year-old whose nationality was unclear.

Bahrain’s health ministry said a Bahraini citizen who arrived from Iran had been diagnosed with the disease and that “all necessary measures have been taken with individuals in contact with the patient”.

Iran has reported 43 cases of the deadly flu-like virus.

The number of coronavirus cases in South Korea has risen by 161 to 763, officials said.

Two more deaths from the strain of coronavirus have also been recorded, bringing the total in the country to seven.

More than 140 of South Korea’s new cases were in and near the city of Daegu, where most of the country’s infections have occurred so far.

While officials in South Korea have expressed hope they could contain the outbreak to the region surrounding Daegu, some experts noted signs of the virus circulating nationwide, including a number of cases in the capital Seoul.