Britain seeks to avert a lockdown with threats of huge fines for violating virus restrictions. ‘Flights to nowhere’ are a thing.

Here’s what you need to know: 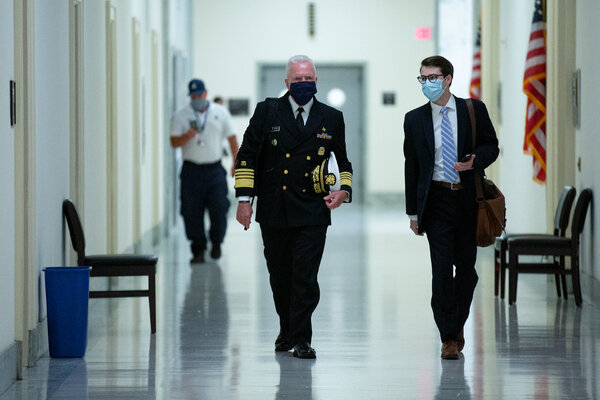 Health officials sidestep questions about Trump’s timeline for ‘enough vaccines for every American by April.’

As the nation’s coronavirus death toll neared 200,000, top administration health officials on Sunday delicately sidestepped President Trump’s ambitious declaration last week that a vaccine would be available for every American by April.

Both seemed to defend the forecasts made by experts including Dr. Robert Redfield, the head of the Centers for Disease Control and Prevention, who was publicly rebuked by the president for estimating that an effective vaccine may not be widely available to the general public until the middle of next year.

On the CNN program “State of the Union,” Admiral Giroir told the host, Jake Tapper, that “in front of the Senate, Dr. Redfield and I both said that a vaccine that would be widely available in hundreds of millions of doses would not likely happen until mid-2021. That is a fact.”

However, he said, that the president was correct in saying that “We could have as many as a hundred million doses by the end of this year. That is correct.”

“I think everybody is right,” Admiral Giroir said.

Mr. Trump has often promised that the United States would produce a vaccine by Election Day on Nov. 3. But his optimism and projections for widespread availability have been roundly disputed. At the White House on Friday at a news conference, Mr. Trump said that once a vaccine is authorized, “distribution will begin within 24 hours after notice.”

He added: “We will have manufactured at least 100 million vaccine doses before the end of the year. And likely much more than that. Hundreds of millions of doses will be available every month, and we expect to have enough vaccines for every American by April.”

The U.S. population has reached 330 million, according to estimates by the Census Bureau.

Several recent public opinion polls have shown a growing distrust or wariness among Americans of a rushed vaccine. In a new ABC News/Ipsos poll, fewer than 1 in 10 Americans had a great deal of confidence in the president’s ability to confirm vaccine effectiveness; 18 percent reported only a “good amount” of confidence.

In their separate TV interviews, Admiral Giroir and Mr. Azar reiterated the need for the public to wear masks, a practice the president often mocks. Mr. Trump’s recent campaign rallies are crowded full of supporters who do not wear face coverings, in violation of mask requirements in some localities.

Mr. Azar told Chuck Todd on the NBC program “Meet the Press” that masks were clearly important. “I think the point the president was making is there’s not an equivalence between masks and vaccines,” he said.

In recent weeks, Mr. Azar and some of his deputies have faced withering criticism, accused by public health experts and lawmakers of censoring and altering C.D.C. researchers’ reports on the virus and of putting politics over science at the Food and Drug Administration. In a stunning declaration of authority last week, Mr. Azar barred the nation’s health agencies from signing any new rules regarding the nation’s foods, medicines, medical devices and other products, including vaccines.

On Sunday, Mr. Azar was asked about whether the White House had forced him to hire Michael Caputo, the assistant secretary for public affairs, who is on medical leave after he posted a Facebook video in which he accused scientists at the C.D.C. of “sedition” and warned of a leftist uprising after the November presidential election.

Mr. Caputo later apologized for the tirade, in which he said, “There are scientists who work for this government who do not want America to get well, not until after Joe Biden is president.”

Mr. Azar said he wouldn’t discuss personnel matters and added: “Our thoughts and prayers are with Michael. He added value and helped with our Covid response.”