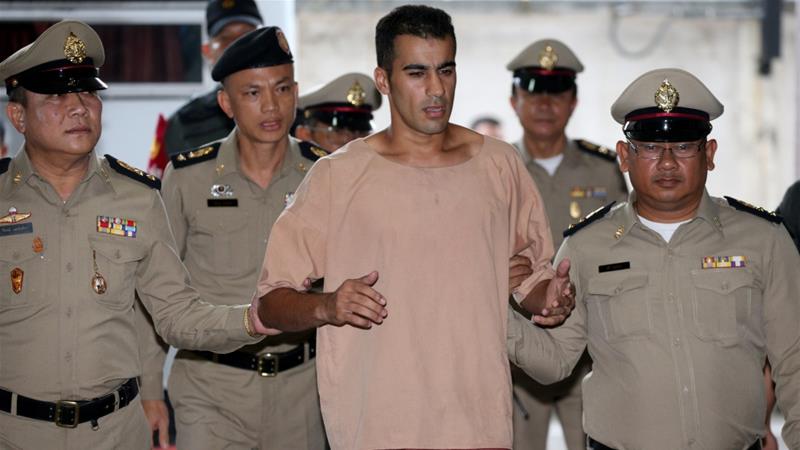 Bangkok, Thailand – After weeks of detention in Bangkok’s Klong Prem Remand Prison, refugee footballer Hakeem al-Araibi has appeared at Thailand’s criminal court to fight extradition to Bahrain, the country he fled in 2014.

“Please don’t send me to Bahrain!” he shouted on Monday morning, as he walked off the prison bus barefoot, his feet shackled.

Later, in a crowded courtroom filled with international diplomats in a show of support for the 25-year-old, al-Araibi denied all allegations against him and told the judge he feared being tortured if he was sent back to Bahrain.

In 2014, Bahraini authorities sentenced him in absentia to 10 years in prison for allegedly vandalising a police station. 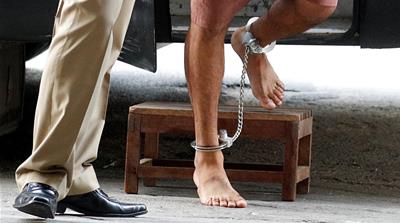 The footballer, a former member of Bahrain’s national team, has denied the accusation, saying he was playing a televised match at the time.

He fled to Australia in 2014 after hearing of his sentence, saying he had been tortured in Bahrain when he was arrested two years earlier, allegedly for his brother’s political activities during the 2011 Arab Spring uprising.

In Australia, which granted him political asylum in 2017, al-Araibi started playing as a defender for Pasco Vale, a Melbourne-based semi-professional club.

At Monday’s court hearing in Thailand’s capital, the ruling judge denied him bail but agreed to a defence request to file a formal petition opposing extradition by April 5.

An arraignment date was set for April 22, when a witness list and trial date would be confirmed.

Al-Araibi’s court appearance came more than two months after being arrested at Bangkok’s Suvarnabhumi airport by Thai police, who were acting on an Interpol “Red Notice” issued by Bahrain.

The footballer and his wife had just flown from Australia to begin their honeymoon.

Since his arrest in November last year, prominent rights groups have been calling for his immediate release and return to Australia.

“The Thai authorities should stop all proceedings relating to this absurd, cruel and cynical extradition request,” Katherine Gerson, Amnesty International’s Thailand campaigner, said in a statement on Monday.

“It is well known that Hakeem survived torture in Bahrain and that his relatives continue to face persecution there. Hakeem and his wife have found sanctuary in Australia; he should not spend another day in detention and should be allowed home, to Melbourne, immediately.”

‘Why is Bahrain doing this?’

Bahrain has a history of human rights abuses, according to the US State Department’s Country Report on Human Rights Practices.

The report indicates instances of “arbitrary or unlawful killings by security forces; allegations of torture of detainees and prisoners; harsh and potentially life-threatening conditions of detention; arbitrary arrest and detention”, among others.

The Asia Pacific Refugee Rights Network (APRRN), a network of hundreds of civil society groups committed to advancing the rights of refugees in the Asia Pacific region, has also been highly active in supporting al-Araibi’s case.

Evan Jones, programme coordinator at APRRN, has been working closely with the footballer, as well as the Australian government and world football governing body FIFA to ensure his safe return to Australia.

“Any move by the Thai government to extradite Hakeem would seriously tarnish Thailand’s reputation as a country that abides by fundamental international human rights principles,” Jones told Al Jazeera.

Jones said al-Araibi has not been able to sleep properly for days and has fallen sick from being in an overcrowded prison.

He says al-Araibi told him recently: “Why is Bahrain doing this? They don’t respect human rights. I have been tortured before and they will do it again.

“I am a refugee and I live in Australia. I want to go home to Australia I don’t want to go to Bahrain. Why won’t Thailand just let me go home?”