Labor Day marks the traditional start of the election season for Donald Trump, Joe Biden and their running mates. 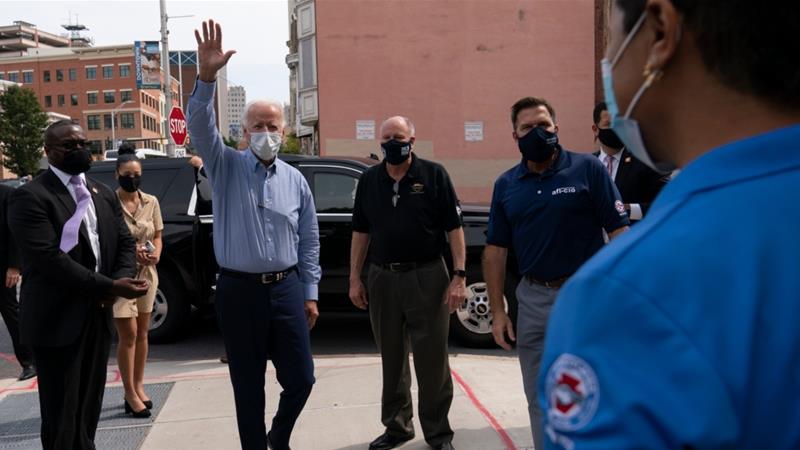 Democratic vice presidential nominee Kamala Harris met the family of a Wisconsin man shot by police last month to kick off her Labor Day visit to a critical swing state while President Donald Trump assailed the Democratic ticket and put the halting economic recovery under the best light.

Harris gathered with Jacob Blake’s father, two sisters and members of his legal team at the airport in Milwaukee while Blake’s mother and lawyer Ben Crump joined by phone. Blake also joined the conversation by phone.

Democratic presidential candidate Joe Biden met the family last week in Milwaukee before visiting Kenosha, the city where police shot Blake seven times in the back, leaving him paralysed from the waist down.

At a news conference from the White House, Trump attacked Biden as a leader incapable of handling the coronavirus and reviving the economy.

Trump boasted about adding more than 10 million jobs since May without mentioning that that is only about half of the jobs lost since the pandemic started.

Biden, meanwhile, was collecting a trio of endorsements from organised labour as he headed to Harrisburg, Pennsylvania, for an AFL-CIO virtual town hall with union President Richard Trumka.

Meeting first with local labour leaders in the back yard of a supporter’s home in Lancaster, Pennsylvania, Biden spoke about trade, the coronavirus and the economy as he criticised Trump for “refusing to deal with the problems that affect ordinary people” and called for strengthening unions.

Trump’s narrow win in Wisconsin in 2016 helped to send him to the White House.

The state’s importance in the 2020 elections was underscored by all four candidates campaigning there over the past week.

The Biden campaign believes its labour support could help get out the vote in states like Wisconsin and Pennsylvania.

Labor Day typically marks the unofficial start to the autumn campaign season as candidates accelerate their activity for the final sprint to Election Day. But Monday’s events are playing out this year against the backdrop of a pandemic that has upended campaigning, forcing much of the candidates’ traditional activity online.