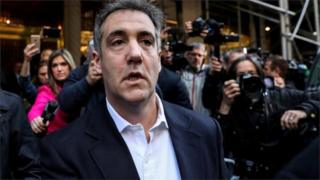 Michael Cohen, President Trump’s ex-personal lawyer, is back in jail.

Cohen, who is serving a three year sentence related to hush payments made for Mr Trump, was released from prison in May, due to coronavirus concerns.

The authorities said Cohen had now been returned to prison after refusing the conditions of his home arrest.

His lawyer, Jeffrey Levine, said the conditions would have barred him from speaking to news organisations or posting on social media.

Cohen, 53, is serving a three-year sentence for lying to Congress and campaign finance fraud.

His return to jail comes days after he was spotted on 2 July having dinner with his wife and another couple on Manhattan’s Upper East Side.

Cohen had been furloughed – given a leave of absence – from prison in May after the centre where he was detained had a number of confirmed Covid-19 cases.

He was in court on Thursday to arrange for this furlough to be converted to home confinement – but there was disagreement over the terms, US media said.

A statement from the Federal Bureau of Prisons (BOP) on Friday said Cohen had “refused the conditions of his home confinement and as a result, has been returned to a BOP facility”.

Mr Levine said the agreement would have deprived Cohen of his “First Amendment rights to communicate with the media”.

“I’m never seen any language like this in my life,” he told reporters.

Cohen was spotted by the New York Post at the swanky Le Bilboquet French restaurant on 2 July. The newspaper reports that he and his wife stayed until closing around 23:00, and donned masks to hug the other couple before leaving.

According to CBS News, he was also seen on 27 June and 1 July eating at Avra Madison Estiatorio.

“He was just walking around like everything was normal,” a source who did not wish to be identified told CBS.

Earlier this week, Mr Levine had defended his client’s choice to eat out – saying that he is “currently on furlough” and that he “did not violate any of the terms and conditions of his release”.

The former fixer, who once said he would take a bullet for Mr Trump, was the first member of his inner circle to be jailed during a justice department-led inquiry into alleged Russian meddling in the 2016 election.

He admitted to lying to Congress about a Trump Tower project in Moscow, and campaign finance violations for his role in making hush money payments to women alleging affairs with Mr Trump and other tax and bank fraud charges unrelated to the president.