HONG KONG (Reuters) – To escape the confines of his Hong Kong “coffin home”, or two square meters (21.5 square feet) of living space, Simon Wong usually spends his days in the park playing mahjong with friends, only returning at night to sleep.

But since the Chinese-ruled city reported its first patient with coronavirus last month, Wong has been stuck indoors in the home he has to climb a ladder to get into and which is just large enough to hold a single mattress.

“I don’t go out anymore, there are no more gatherings,” said the unemployed 64-year-old.

“As soon as I finish my tea and grocery shopping, I come home and become a recluse and just watch TV. I can’t do anything.”

Two people have died so far from over 80 confirmed cases of the coronavirus in Hong Kong. Wong, whose family cut contact with him many years ago, cannot afford face masks or hand sanitizers and feels particularly at risk, even more so than during the Severe Acute Respiratory Syndrome (SARS) outbreak in the city in 2003.

“During SARS I didn’t even wear one mask, I was even working then,” he recalls. “I lived in a place like this, with even more open space, 30 people and not one wore a mask.”

The Asian financial hub has one of the world’s highest inequality rates, with more than a million of its population of nearly 7.4 million living below the poverty line. More than 200,000 people are housed in subdivided flats, commonly referred to as “coffin homes” because they are so small, government data shows.

Wong has lived in such accommodation for the past two decades, occasionally working as a waiter or security guard.

His current abode is one of 18 plywood “coffin homes” in a dusty subdivided apartment in Hong Kong’s most densely populated neighborhood, Mong Kok. An improvised shelf holds his TV and groceries, while his clothes and other necessities hang on hooks around him.

The rent takes up two-thirds of the roughly HK$3,000 ($385) he receives in social benefits. The rest pays for two meals a day, often rice and pork.

For anything else, he improvises, refilling his sanitizer at public clinics or the mainland immigration office where it is offered to visitors for free, and wearing face masks for consecutive days to make them last.

Some help may be at hand as the Hong Kong government is expected to lay out new relief measures for low-income people and small businesses in its annual budget on Wednesday.

Leung Hon-Kee, a hotel cleaner who has lived in a “coffin home” for nearly a decade, is working fewer hours as tourism has all but dried up. He too is mostly constrained to his 3-square-metre bunk, and spends time surfing the internet on his phone. 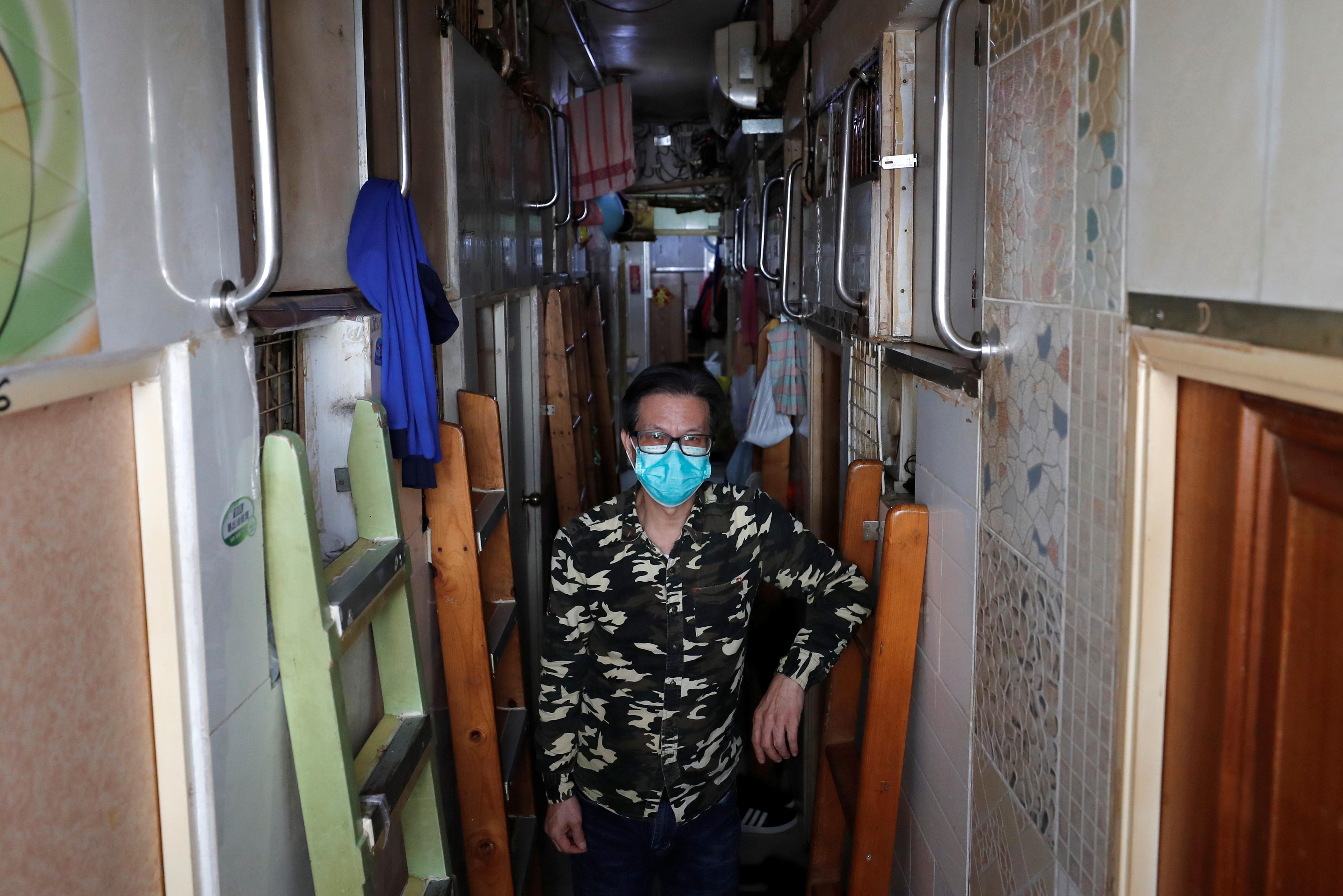 “It doesn’t feel good, but there’s nothing we can do,” he said.

One of Wong’s main worries is the close proximity of his neighbors, some of whom have recently returned from mainland China, epicenter of the coronavirus.

“If we knew they were seriously ill, we’d kick them out,” he said.