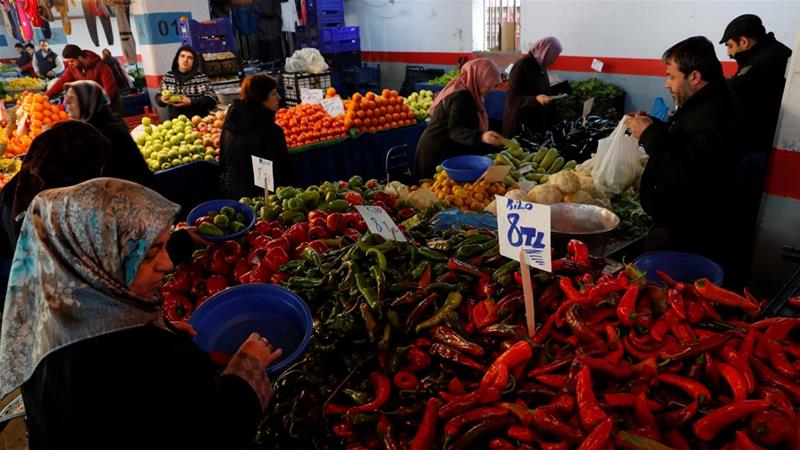 The municipalities of the country’s two largest cities offered staples of the Turkish diet at about half the price of those in stores and markets.

The opening of 50 sales points in Istanbul and 15 in Ankara on Monday came after January’s inflation figures showed the price of food and non-alcoholic drinks rose by 31 percent year-on-year.

In recent weeks, officials have blamed the rising cost of basic items such as tomatoes, aubergines, potatoes and onions on profit-chasing middlemen and retailers.

Erdogan told a campaign rally on Monday that rising prices were a “terrorist attack” by unidentified powers “playing a game on Turkey”. He went on to compare efforts to keep food prices down with the 34-year fight against Kurdish separatists in the country’s southeast.

In the past, Erdogan and some Turkish officials have blamed Turkey’s problems on unidentified, often foreign, influences.

The government has carried out waves of inspections on shops, markets and food depots in a bid to combat alleged speculators. Last week, the trade ministry said 88 firms were fined a total of 2 million liras ($380,000) for charging excessively high prices.

“The government feels the recent hike in food prices is not one of the market’s own making but one induced by a foreign or another actor,” said Can Selcuki, general manager and partner at Istanbul Economics Research.

“I believe the real reasons behind the hike are the structural problems in our agricultural sector. Are their people trying to use this to their advantage and make money? Of course, but the scale is marginal.”

Others point to the rising labour and transport costs, as well as recent floods that hit agriculture in Antalya, on Turkey’s southern coast, as contributing to soaring food prices.

At a distribution point in Sihhiye, central Ankara, shoppers queued in front of municipality tents on Monday, where they were limited to a few kilos of each product.

“I don’t know if it is food terrorism but the prices in the markets are too much for me these days,” mother-of-three, Handan Kececi, 49, said. “It’s not good queueing for so long but what can I do? At least the government is helping us with the high prices.”

A retired civil servant, who declined to give his name, said he waited for more than an hour to buy tomatoes and onions.

“I wouldn’t want to queue like this every day but I think it is something good,” he said. “Whether it continues after the election, I don’t know. Everyone says they will give low prices to win votes and then everything will return to how it was and prices will continue to rise. God willing, it won’t.”

Although the limited scope of the municipal markets is unlikely to affect overall food prices across Turkey, traders at a weekly fruit and vegetable market in Ankara’s Maltepe neighbourhood were concerned by the development.

“Conditions are already very hard for us,” said a 36-year-old stall-holder, who only gave his name as Fatih. “The municipality’s sales points don’t have to pay tax or rent. It is unfair competition. Our profits are very low. I make barely enough to care for my family.”

Timothy Ash, an economist at BlueBay Asset Management in London, warned of the potential electoral risk in undercutting small traders.

“Given the AKP has a strong support base among small shopkeepers, I would think they need to be careful with this,” he said.

Selcuki also highlighted a potential political backlash, with critical comparisons being made to food rationing during the 1940s on social media.

“The opposition will play on the images of long lines because Mr Erdogan has criticised the period of the [Ismet] Inonu government during the Second World War, when food had to be rationed,” he said.

“Secondly, if it goes on for too long, I don’t know how happy people will be to wait for half-an-hour or an hour for a few kilos of aubergines.”

He added: “I don’t know if it will go beyond March 31, I suspect not. But even if they stay open after the election, I don’t know how people will feel about having to shop at these places. People are accustomed to a certain standard of living and they don’t like it if this is affected for a long period.”

The government has said it will expand municipal sales to other goods such as cleaning products and legumes.