LAGOS, Nigeria — Gas flaring worldwide decreased by 5 percent in the pandemic year, mostly because of lower demand for oil, according to a recent report from the World Bank.

While the overall drop was expected, the report offered a detailed picture of the flaring activities around the world, with steep declines in some areas, like the United States, and surprising increases in others, notably China.

Flaring occurs when the gas that emerges with crude oil is burned off rather than captured. That burning emits carbon dioxide, a gas that is the main contributor to climate change. According to World Bank officials, flaring adds roughly 400 million metric tons of CO2 equivalent emissions to the atmosphere every year.

According to the report, Russia was responsible for more flaring overall than any other country in 2020, contributing 15 percent of the global total. But within Russia, there were areas of progress. Burning continued to decrease in the Khanty-Mansi region of Siberia, where flaring volumes have dropped by nearly 80 percent over the previous 15 years.

The other top flaring countries, according to the report, were Iraq, Iran, the United States, Algeria, Venezuela and Nigeria.

China, ranked 15th in the world in flaring volume, saw the biggest change, with flaring increasing by 35 percent despite its oil production remaining flat. The report cited testing in new oil fields in the country’s remote northwest.

The United States recorded a significant 32 percent drop in 2020 from the year before, mainly because of new infrastructure to capture gas that otherwise would have been flared. 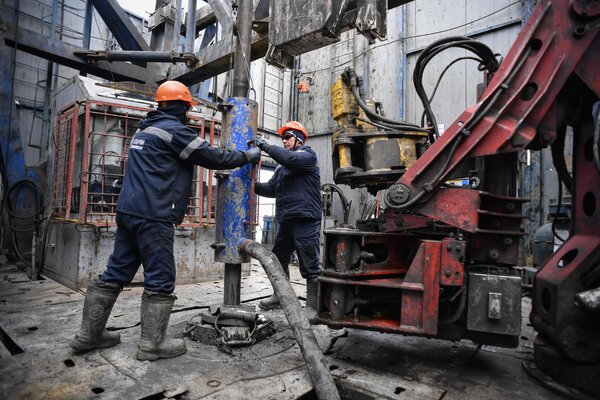 The report, published at the end of April, relied on data collected by two satellites operated by the National Oceanic and Atmospheric Administration and analyzed at the Payne Institute for Public Policy at the Colorado School of Mines.

In addition to contributing planet-warming carbon dioxide to the atmosphere, routine gas flaring can harm the health of people who live near gas sites. It also wastes a potentially useful energy source, a problem that is especially acute in poorer countries.

According to the World Bank report, 700 million people currently lack steady access to energy, and more than 620 million, the vast majority of them in sub-Saharan Africa, could still be without reliable power in 2030.

Nigeria, Africa’s largest oil producer and the biggest gas-flaring country in the sub-Saharan region, has reduced gas burning by 70 percent in the last 15 years, the World Bank report said. That reduction was partly because of projects that have helped the country convert waste gas into liquid fuels for exports.

Recently, though, Nigeria has struggled, with gas flaring volumes rising slightly between 2018 and 2019. A promise to eliminate flaring by 2020 never materialized and two other deadlines, one in 2004 and another in 2008, were also missed. The pandemic has also slowed projects aimed at capturing more gas.

But the main problem, according to Afolabi Elebiju, a corporate lawyer based in Lagos who follows the energy industry, is that under Nigerian law, which is often weakly enforced, unauthorized flaring carries relatively light penalties.

Mr. Elebiju called flaring “a monster” in Nigeria. “The government is thinking, ‘If we drive these guys too hard, they will run away,’” he said, referring to foreign oil companies operating in Nigeria. “But in many other countries where they are forceful, operators are complying, including in their own home countries.”

Analysts emphasize that there is no single solution to the global flaring problem. While the main obstacle in Nigeria is lax enforcement, other countries face different challenges. In the United States, for example, there are thousands of small scale flaring sites that are difficult to connect to a single market. In Russia, the remoteness of some sites would mean high costs for transporting gas to market even if it were captured.

Although the overall decline worldwide gave cause for optimism, Zubin Bamji, who leads the gas flaring program at the World Bank, predicted that rates could rise when the global economy fully reopens.

“In the U.S., we expect an increase in gas flaring in 2021 as operators start to increase oil production again in response to oil price increases,” Mr. Bamji said, though he also noted that improved gas infrastructure could mitigate the rebound.

“We need to see movement from the top seven flaring countries to see dramatic change,” Mr. Bamji said. “Plans put in place now will likely not bear fruit until close to 2030 because projects take years to see results, so investment and flaring reduction programs must start now.”