The abandoned cargo ship appeared near Ballycotton in Co Cork during Storm Dennis. The mysterious vessel, called the Alta, had 10 crew members rescued by the US Coast Guard in September 2018.

Since then it has been drifting with no one aboard and it was last week off the coast of West Africa.

Ballycotton RNLI lifeboat operations manager John Tattan told the Irish Examiner: “This is one in a million.

“I have never, ever seen anything abandoned like that before.” 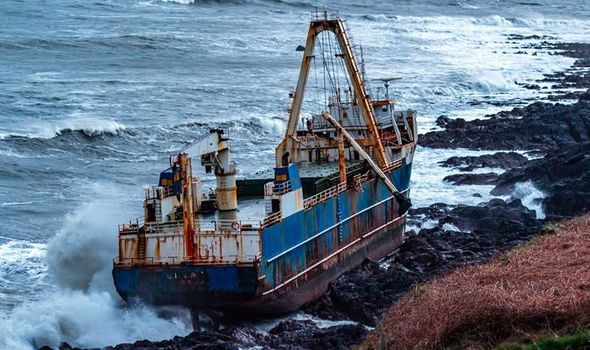 Last September, the Royal Navy’s ice patrol ship HMS Protector posted on Twitter that they had come across the vessel in the middle of the Atlantic ocean.

“We closed the vessel to make contact and offer our assistance, but no one replied! 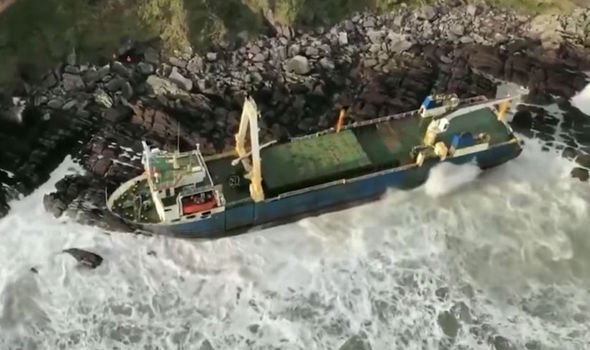 “Whilst investigations continue we’re unable to give you more detail on this strange event.”

After the ship washed up on the Cork coastline, the Irish Coast Guard tweeted: “Rescue 117 was tasked earlier today to a vessel aground near Ballycotton, Cork. There was nobody on board.

“Previously the @USCG had rescued the 10 crew members from the vessel back in September 2018.

DON’T MISS
WATCH: Horror as River Wye torrent swamps car in middle of road [VIDEO]
DANGER to life flood alerts in place – is your area affected? [INSIGHT]
UK Storm Dennis latest: When will storm be over? Will Ellen be next? [ANALYSIS] 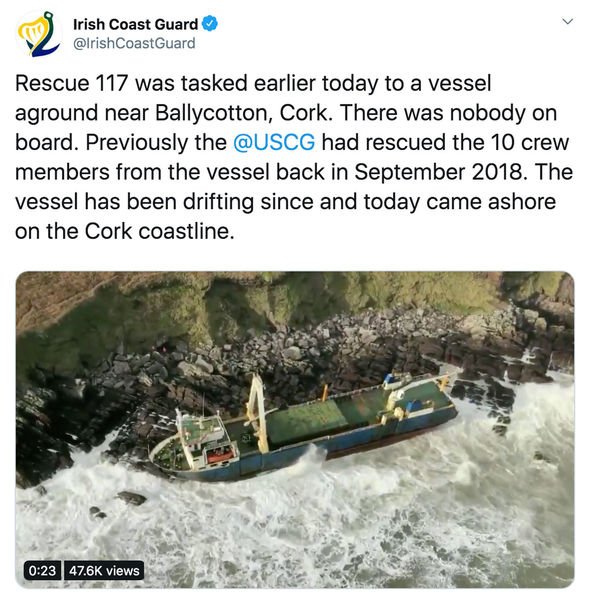 “The vessel has been drifting since and today came ashore on the Cork coastline.”

In a statement Cork County Council said it had convened its oil spill assessment team as part of contingency plans in response to the grounding of the ship.

It is monitoring the ship in relation to any possible oil spillage or risk arising from its cargo.

The council said on Monday: “Following an appropriate risk assessment, the contractor will board the vessel at the next suitable opportunity which is expected to be at low tide tomorrow morning at approximately 7am.

“Any risk in relation to oil, other hazardous substances and pollution from the vessel will be evaluated.”

The council warned that people should stay away from the wreck as it is located on a dangerous and inaccessible stretch of coastline and is in an unstable condition.

It said further information will be made available as soon as possible on Tuesday.

Storm Dennis brought strong winds and heavy rain to the UK and Ireland over the weekend.

It lashed Britain with 90mph gusts and some parts of the country saw a month’s worth of rain in 24 hours.

A record number of flood warnings and alerts, more than 600, were issued by the Environment Agency across England on Sunday.

The UK’s transport network was hit by disruption with flights cancelled, treacherous driving conditions for motorists and chaos to train services.

It comes a week after Britain took a battering from Storm Ciara.