The Bidens met the former US President and former First Lady in Plains, Georgia. Late on Monday evening, the Carter Center posted a picture on its official Twitter account showing the four meeting.

Social media users were quick to spot that the Bidens look unusually large compared to the Carters in the photo.

The Carters can be seen sitting down on arm chairs with the Bidens kneeling either side of them.

Some Twitter users believe the image looked peculiar because of the type of camera lens used and the position of the Bidens.

One person tweeted: “These four are adorable but this is a perfect example why to avoid photographing portraits with a super wide lens. 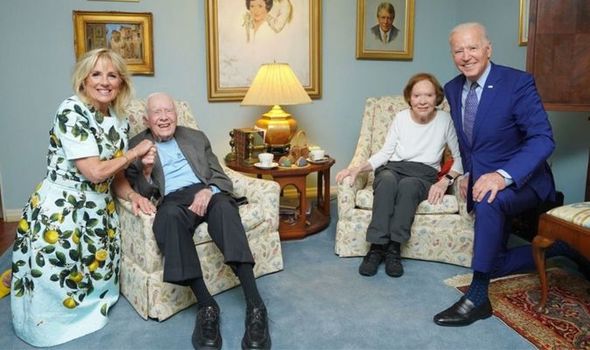 “Anything on the edges will appear huge due to lens distortion. Must have been a very small room and no other option.”

Another Twitter user said: “It’s all about the angles, just look how much closer Joe’s foot is to the camera and that his hand is resting on the front of the chair arm.”

Others suggested the photo might look odd because Jimmy, 96, and Rosalynn, 93, may have shrunk a little, as is common when people age. 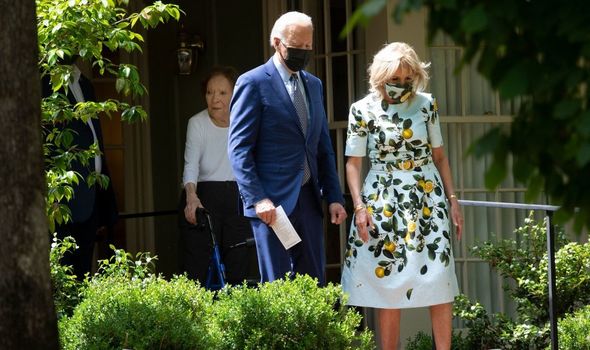 One Twitter user posted: “Dude what is with the size difference between these people what the hell is going on here.”

Another user wrote: “Why do The Carters look like miniatures?! They are amazing wonderful people. The proportions here are off somehow. Who else agrees?!”

A third user tweeted: “Adorable! But am I the only one who thinks this looks like a tiny doll museum, and Joe and Jill are giants?”

A fourth person commented “Are they mini people?” and another Twitter user jokingly replied “They’re the Sylvanian Carters” – referring to the miniature animal character toys made for children. 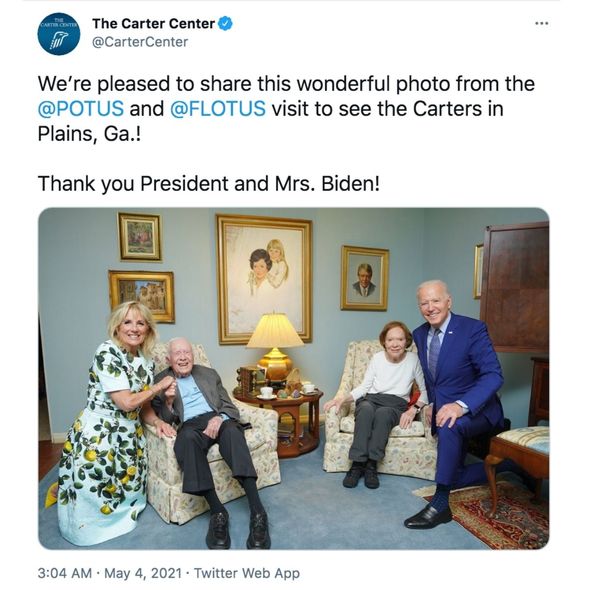 According to the Washington Post, by Tuesday morning more than 13,000 people had retweeted one of several posts questioning the bizarre picture.

Marlena Sloss, a freelance photographer in San Francisco, told the paper the image seemed to have been captured with a strong flash and a wide-angle lens.

She added that although Mr Biden is kneeling much farther in front of Mrs Carter, the strong flash reduces the shadows which makes it seem like the President is right next to her.