Hagia Sophia has witnessed many upheavals in its 1,500 year history, evolving from a cathedral to a mosque, then a museum.

In a landmark decision, Turkey’s high court has ruled that its conversion into a museum in 1934 was unlawful – paving the way for the most visited monument in the country to be converted back to an Islamic place of worship.

The move, which threatens to upset Christians around the world, is not about creating more space for prayer as Istanbul has more than 3,000 mosques.

Rather, the decision reflects the wider societal struggle within Turkey between secularism and President Erdogan’s religious conservatism. The usual crowd of tourists was absent as the announcement came, but the predominantly Turkish media gathered outside Hagia Sophia.

Turkish officials have said opening Hagia Sophia to prayer will not stop tourists from visiting the site and have offered reassurance that the building’s Christian icons will be preserved.

However, historian Zeynep Ahunbay, who has worked on the conservation of Hagia Sophia for 27 years, doesn’t see how that will be possible.

She said: “With the images of Madonna, mother of Christ, and other saints on the walls – do they accept to pray in the presence of these images?

“It’s a [UNESCO] world heritage site and I want it to be open to all nations and beliefs and accessible. If it becomes a mosque there are restrictions. 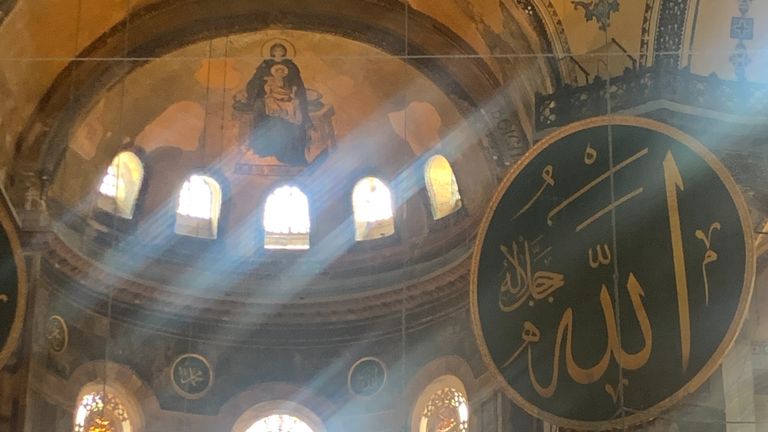 “They try to put up curtains or other means of restrictions and that’s not acceptable for a world heritage monument,” she added.

“It is not acceptable to go back in time. I’m really sorry we have come to 2020 and we are trying to go back to the 19th century.

“There is already tension in Turkey because there is a reaction to these conservative people who make decisions as if we are an Islamic country,” she said.

Turkey is overwhelmingly Muslim and this move to reclaim Hagia Sophia as a mosque is seen as a bid to boost Mr Erdogan’s AK Party’s sliding popularity polls. The move may prove popular with Mr Erdogan’s conservative supporters and nationalists but church leaders have argued Hagia Sophia was Christian for nearly 900 years and Muslim for only 500 years.

Last year the monument attracted more than 3.7 million visitors but tourism and Turkey’s struggling economy have been badly impacted by the coronavirus pandemic.

The Turkish economy had already been in a fragile state and many believe this move was to distract public attention from Ankara’s crisis.

But flattened tourism and rising unemployment means any distraction could be short-lived.

The UNESCO World Heritage Site is one of the oldest and most striking religious buildings in the world.

As a museum it has preserved its long history between Christianity and Islam, a symbol of Istanbul’s position as a bridge between the East and the West.

It is perhaps the only former building of worship in the world where you see this hybrid of two religions sitting side by side in its frescos, inscriptions and striking mix of architecture.

Some fear it will now lose its sense of inclusion and become a divisive symbol.

Hagia Sophia was a Greek Orthodox Cathedral from 537AD but when Constantinople was conquered by the Ottomans in 1453 the city was renamed Istanbul and the venerated building was turned into a mosque.

It became a disputed symbol between Christianity and Islam for centuries.

After the fall of the Ottoman Empire during the First World War, Turkey’s founding father Mustafa Kemal Ataturk turned Hagia Sophia into a museum in the 1930s; a sign of his commitment to a secular future for the country – separating state from religion.

During President Erdogan’s time in office mosques have sprung up in some of Istanbul’s most important sites.

A newly-constructed mosque now towers over the secular monument in Taksim square.

As the mosque was being built, the city’s opera house was demolished – a symbol of the Ataturk era.

Hagia Sophia could be open for prayers as early as 15 July – the date of the attempted coup in Turkey four years ago and now a national holiday.