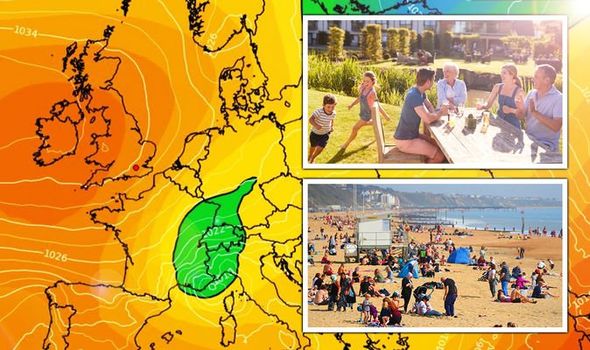 After a chilly and dreary start to spring, the thermostat will get cranked up to blazing within just a few weeks. The glorious news will have sun-lovers nationwide dusting off barbecues, although government forecasters warn ‘impacts’ from the heat are possible during early summer. The weather shows promise of turning very warm over the coming weeks, according to independent forecasters.

Jim Dale, meteorologist for British Weather Services, said: “There will definitely be some spikes of heat as we go into summer when I expect to see temperatures in the high 20Cs or even the low 30Cs.

“This is largely because of a balancing effect which, after the colder period of weather over the past couple of months, dominated by a northerly airflow, should revert and come from a more southerly direction.

“This will bring more in the way of hotter weather as we go through the end of spring and into summer.

Warm weather is almost twice as likely as cold over the next 12 weeks, according to the Met Office.

Its three-month contingency planner predicts a ‘greater than normal impacts from hot weather’ in the run up to summer. 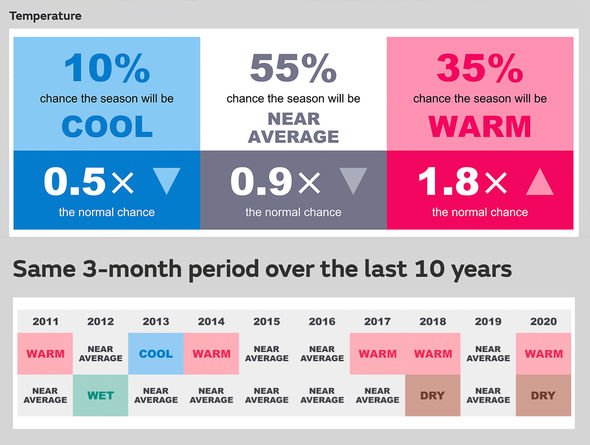 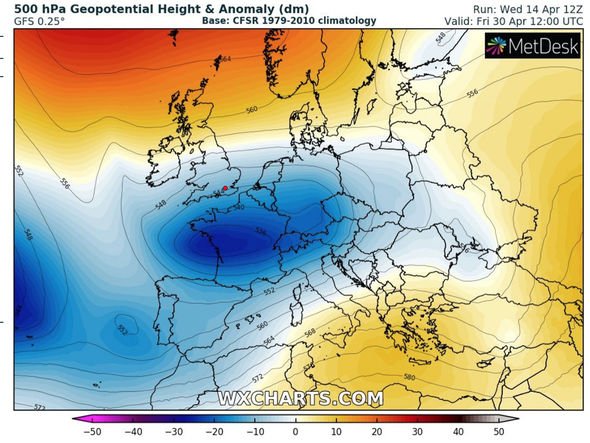 Rocketing temperatures will be driven by three meteorological phenomena: a stronger than average Stratospheric Polar Vortex which will encourage westerly winds; weakening of a recent La Nina Pacific Ocean cooling event; and impacts from the Madden-Julian Oscillation (MJO)–a pattern of tropical rainfall in the Indian and Pacific Oceans.

La Nina drives the cooling of waters in the eastern Pacific Ocean and follows an El Nino warming which occurs along the west coast of South America.

A strong La Nina was registered earlier this year and may have partly contributed to the recent unusually cool conditions.

La Nina tends to drive strong temperature differences across parts of the world including the United States, and this may have a knock-on effect in the UK.

As La Nina weakens, temperatures can swing in the other direction; this is what forecasters think may happen in Britain this summer.

The Met Office also cited the Madden-Julian Oscillation as potentially influencing the weather through the end of spring and into summer.

The MJO, which like La Nina is associated with weather and rainfall patterns in the Pacific, is thought to bring colder than average conditions through winter in the UK. 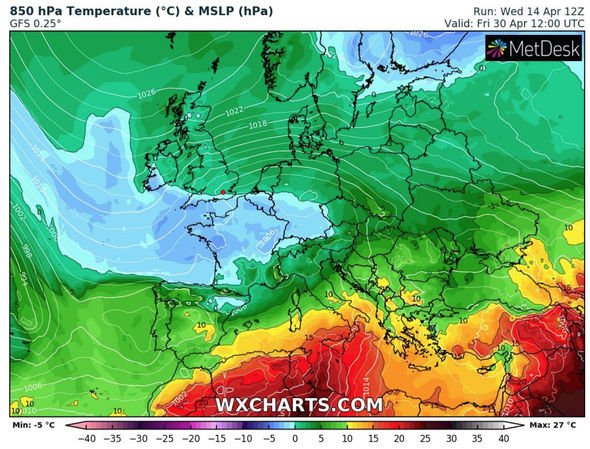 When it enters its mid-phases, it can bring more in the way of milder and wetter conditions to Britain, according to the Met Office.

A spokesman said: “Warm conditions are almost twice as likely as normal [between April and June].

“Global weather patterns can affect UK weather during the coming season, and their influence acts to shift the chances of the categories in the Outlook.

“Drivers relevant to the current outlook are a stronger than average Stratospheric Polar Vortex (SPV), which favours westerly winds, the Madden-Julian Oscillation (MJO), which is expected to move into a phase favouring less strong westerly winds in April, and the recent La Niña event which is now declining.”

Mr Dale, author of Weather or Not? said: “I agree that these factors are probably going to have an influence on the weather this summer and will help to bring warmer temperatures.

“More influential will be the decline in strength of La Nina, this is going to be one of the main drivers of the hot weather.

“The other factors are more tied into the balancing effect.”

The Met Office’s contingency planner, designed to be a guide of possible three-month weather trends, states the period may reflect similar warmer periods in 2011, 2014, 2017 and 2018.

It raises hopes the trend could continue through the summer months putting this year up with the scorchers of 2014 and 2018.

John Hammond, meteorologist for weathertrending.com, while more reserved in his outlook, agreed warmer weather may not be too far off.

He said: “While at this range, there’s no obvious signal of hot weather, I’d be surprised if 30-degree days are that far away by early May.

“It seems to take very little effort these days for temperatures to be encouraged to soar.

“Any hint of southerly winds would provide that encouragement.”