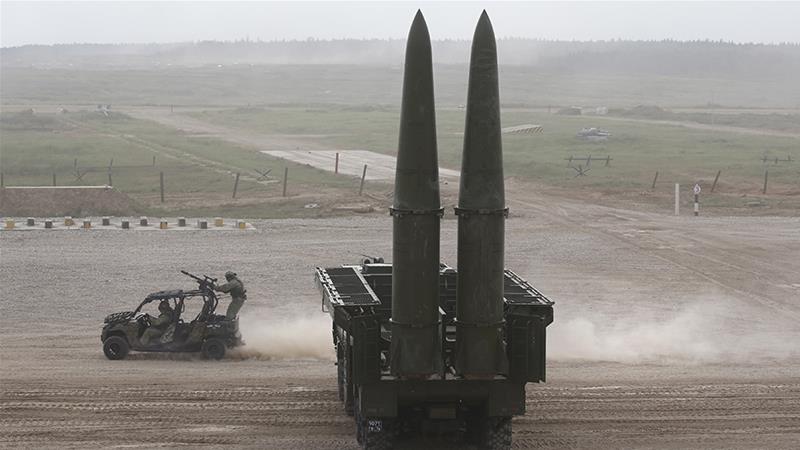 In an escalating standoff over nuclear weapons, Russia and the United States have suspended compliance with the Cold War-era Intermediate-Range Nuclear Forces (INF) Treaty, prompting fears of a new arms race that analysts and politicians say could push the world “much closer” to a nuclear war.

The long-running dispute between Washington and Moscow came to a head on Friday when US President Donald Trump accused Russia of violating the 1987 bilateral treaty with “impunity”, and announced his government was suspending its obligations under the landmark pact.

Pledging to “move forward” with its own military response options, Trump said the US will withdraw from the accord  in six months unless Moscow destroyed land-based missiles allegedly deployed in violation of the treaty.

In a tit-for-tat move on Saturday, Russian President Vladimir Putin said he was also suspending Moscow’s participation in the agreement.

“Our American partners have announced they were suspending their participation in the treaty and we will do the same,” he said in a televised meeting with his defence and foreign ministers.

“They have announced they will conduct research and development, and we will act accordingly.”

Russia will start work on creating new missiles, including hypersonic weapons, he said, adding that Moscow will not deploy such weapons in the European part of the country or elsewhere unless the US does so.

The reciprocal moves effectively terminate a pact regarded as one of the most important safeguards against nuclear war.

They come amid strained relations between Washington and Moscow over issues including Russia’s annexation of Crimea from Ukraine, and its alleged interference in the 2016 US presidential elections.

The strategic advantages for the US, however, were less clear, they said.

“Nothing good will come out of the US withdrawal,” said Mark Fitzpatrick, executive director of the non-proliferation programme at the Washington-based International Institute for Strategic Studies.

“The Trump administration has made a huge mistake – it’s a breakdown of arms control. It’s a breakdown of trust between US and Russia. The US will have problems with its European allies, and it will engage in a new arms race with China as well.”

The INF Treaty was signed following the Euromissile crisis in the late 1970s and 1980s, when the Soviet Union’s mobilising of cruise missiles that could hit most of Europe prompted the US to deploy to the region ballistic missiles that could reach Moscow in 10 minutes.

The pact banned all ground-based missiles with ranges between 500km and 5,500km, ridding Europe of an entire category of destabilising weapons – nearly 3,000 ground-launched intermediate ballistic and cruise missiles were destroyed.

The treaty does not cover air- or sea-launched weapons, and did not include other powers such as China, North Korea, Iran and Israel, allowing these countries to grow their stockpile of weapons.

“Let’s be clear – the Russians were cheating,” said Tom Nichols, a US-based defence analyst. “It was a provocation to menace the Europeans and to see if they could bait the Americans into walking away.”

The US response only showed how “confused” Washington’s nuclear arms policy was, he said.

Observers said most European and NATO countries were unlikely to host any land-based intermediate-range missiles that the US might develop, meaning Washington was pulling out of the deal without “any real strategic benefit”.

Poland and Romania, scarred by past Soviet occupation, may be more enthusiastic to host such weapons, according to Leo Hoffman at the International Campaign to Abolish Nuclear Weapons, but such a move could divide the NATO alliance.

“This is also completely the wrong approach to take,” the Brussels-based campaigner said, “because by arming yourself to the teeth, you make yourself a target”.

The US’ unilateral decision was “jeopardising” Europe’s security, he added.

Carl Bildt, a co-chair of the European Council on Foreign Relations, agreed. The INF Treaty’s demise will allow Russia to deploy its Kalibr cruise missiles with a range of 1,500km from ground launchers, he said in a Twitter post on Friday.

“This would quickly cover all of Europe with an additional threat,” he said.

The treaty expires in two years, but can be extended by up to five years.

“If New START lapses in 2021, no treaties will constrain US and Russian nuclear forces, a break from some 50 years of nuclear arms control between Washington and Moscow,” Steven Pifer, a fellow at Brookings Institute, said in a post on Axios, a US-based news and information website.

“That world invariably will be less stable, less predictable and less secure,” he wrote.