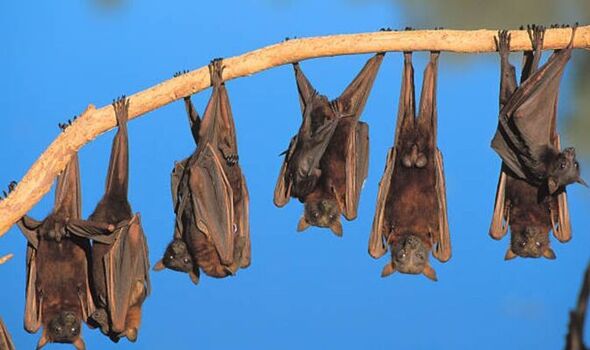 According to a new study, hungry bats could start the next pandemic. Experts have found that “megabats” shed more virus when they are starving.

This is largely because their search for food will lead them to closer proximity to livestock and humans.

And the study focused on Hendra virus, a rare respiratory and neurological disease which is carried by bats.

The flying mammals have a “supercharged” immune system that allows them to coexist with many dangerous pathogens, including Nipah virus, Marburg and Sars.

Hendra kills 75 per cent of the horses that have become infected with him.

These can involve constantly drinking water or bashing themselves against their stables.

The disease, dicovered in Australia in 1994, can also infect human beings.

In the initial outbreak it infected a stable hand who recovered, and a 49-year-old horse trained who didn’t.

Since then, Hendra has crossed from bats to horses in roughly 60 separate spillover events.

Scientists in Australia and America have spent the last 25 years collecting data to understand the nature of the spillovers.

the team found that clusters of Hendra outbreaks came after the “flying foxes” had major food shortages.

The typically nomadic bats heavily rely on the nectar of eucalyptus flowers, and they descend on trees in huge, “lively roosts” when they’re in bloom.

In the years when these flowers were abundant, no spillover events were reported.

Due to deforestation and climate change, few flowers are in bloom, which has meant foxes must travel further into human-populated spaces, where they come into contact with horses.

After sampling the bats, the researchers found they had higher rates of Hendra virus, especially in winters after a climate-driven nectar shortage, further increasing the risk of an outbreak.

“We can assume that across mammals that animals that are nutritionally stressed are less able to control viruses and are therefore more likely to shed viruses,” Prof Raina Plowright, an infectious disease ecologist at Cornell University, told the Telegraph.

“Strategies that make sure that animals have enough to eat, have enough habit so they are not stressed and so they can move through their environment without having to overlap with humans, all contribute to reducing spillover risk,” Prof Plowright said.