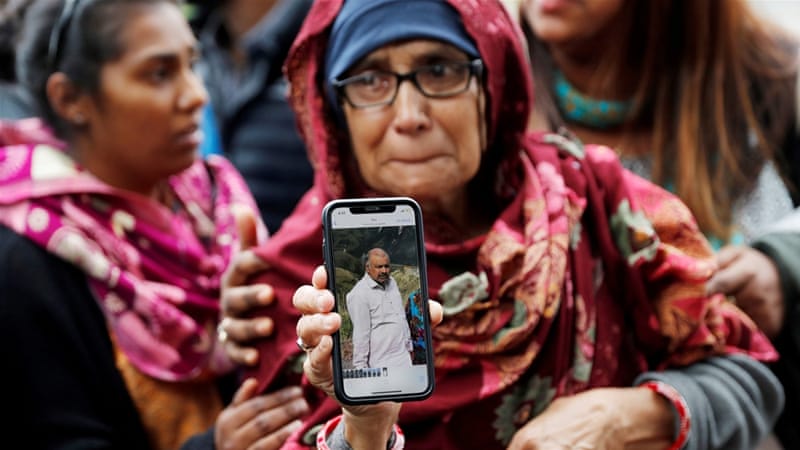 At least nine Indian nationals or people of Indian origin are missing since the mosque attacks in Christchurch, in which at least 49 people were killed, the Indian high commissioner in New Zealand has said.

Sanjiv Kohli, the Indian diplomat, tweeted after the attack on Friday: “As per updates received from multiple sources there are 9 missing persons of Indian nationality/origin. Official confirmation still awaited. Huge crime against humanity. Our prayers with their families.”

Indian officials have not said whether the nine were believed to be living in Christchurch.

Indian media reports, however, said at least one Indian was killed in the massacre that shook New Zealand.

The Indian Express newspaper identified the victim as 34-year-old Mohammed Juned Kara from the western state of Gujarat. Kara is survived by his wife and three children, the daily said.

The report added that two more Indians from Gujarat state – Arif Vohra and his nephew Rameez Vohra – were missing, while Hafiz Musa Patel, Imam of Lautoka mosque in Fiji Islands, was injured.

Speaking to the Indian Express, Ehsan’s father Mohammed Sayeeduddin said, “Authorities at one hospital where injured are admitted told her [Ehsan’s wife] that he was not there. Police told her that he is not among the 49 fatalities. But police have said that at least 17 persons were missing.”

The Associated Press news agency on Saturday reported about an Indian couple in Christchurch looking for their son, Imran Khokhur, who has been missing since the massacre.

Leaning on the shoulders of her friend, Imran’s wife Akhtar cried as she held up her mobile phone with an image of her husband. “I still don’t know where he is,” she said.

Khokhur and husband Mehaboobbhai Khokhur had travelled from India to spend time with Imran, who dropped off his father at the Al Noor mosque on Friday and was looking for a parking space when the shooting began. They have not heard from him since.

India’s Prime Minister Narendra Modi sent a letter to New Zealand Prime Minister Jacinda Ardern on Friday, saying that “hatred and violence have no place in diverse and democratic societies”.

A 28-year-old white nationalist, identified as Brenton Harrison Tarrant, has been charged with killing the worshippers who had gathered for the weekly Friday prayers in a livestreamed attack.

Another 48 people are reported to have suffered gunshot wounds, with some of them in critical condition.

The majority of victims were migrants or refugees from countries such as Pakistan, India, Malaysia, Indonesia, Turkey, Somalia and Afghanistan.

Muslims account for just over one percent of New Zealand’s population, while there are about 200,000 Indians or people of Indian origin in the Pacific island nation.