Country and citizens pay tribute to memories of war and those who laid down their lives in the bloody 1980-88 conflict. 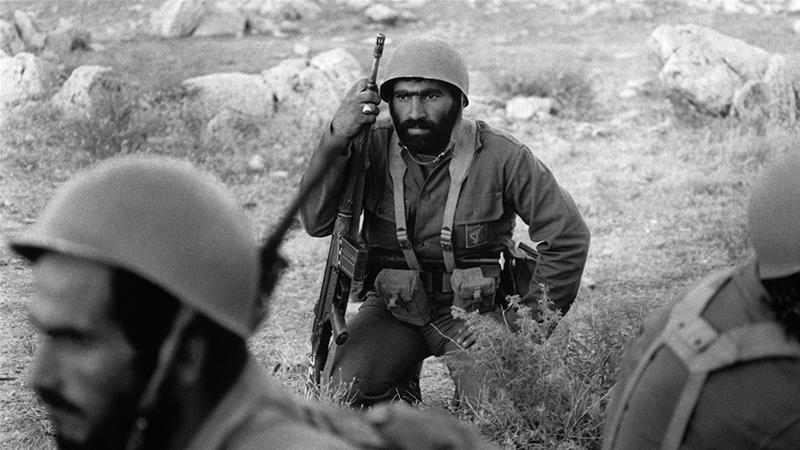 Tehran, Iran – From many friends perishing in front of his eyes to gruesome physical injuries, some might think he has lost too much to the horrors of war.

But 60-year-old Asghar Bakhtiari, who spent 48 gruelling months on a variety of battlefields in the Iran-Iraq War, says now his only regret is “not being able to be in that atmosphere more and learn more from it”.

“There was a love in my body that made me go back again and again. I had a duty to my country and a duty to transfer my hard-earned knowledge of combat to young warriors,” he told Al Jazeera.

Bakhtiari, now a father of two and a pensioner of the National Iranian Gas Company, was only 20 when the eight-year war started after dictator Saddam Hussein invaded Iran on September 22, 1980. The conflict killed an estimated 500,000 people before a UN-brokered ceasefire ended it on August 20, 1988.

After getting his high school diploma, he joined the local Basij paramilitary force, where he and other young men received training from a commando from Khorramshahr, a city in southwestern Iran bordering Iraq that was later captured and whose liberation in 1982 signalled a turning point in the war. 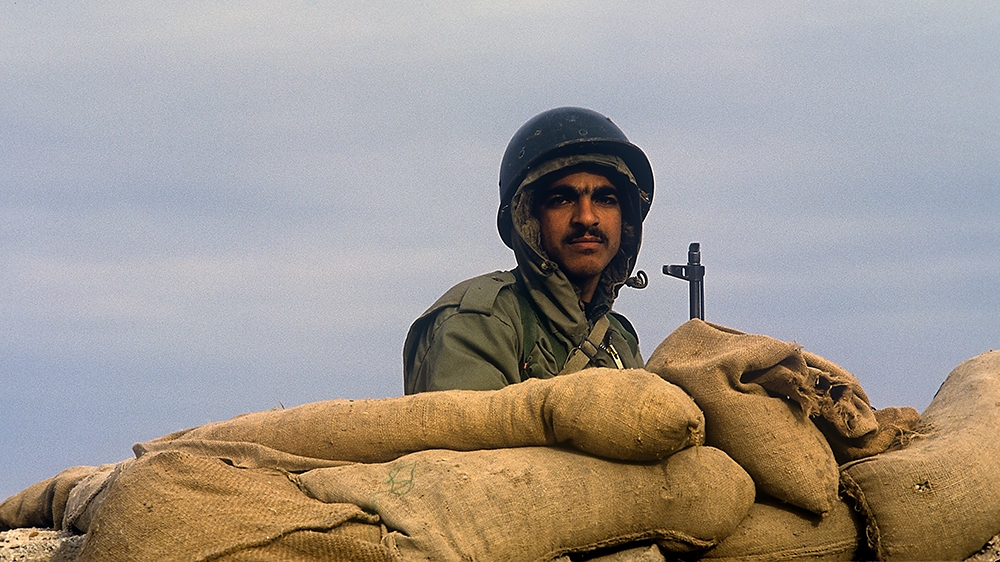 In early 1981, a short time after the war started, he signed up for military service and was deployed into combat in two months.

“I joined the reconnaissance unit with a friend of mine and we were deployed to a small village that was located merely a few hundred metres away from the Iraqis’ position,” Bakhtiari remembers.

Throughout the years, he was on many fronts, and even behind enemy lines, and sustained many wounds.

First, he took a bullet in his right kneecap, which made him come back to Tehran to receive medical treatment.

But he voluntarily returned twice more, before taking two more rounds in his right leg and one to his stomach.
Bakhtiari remembers the agonising circumstances of his rescue back from the front lines.

“Actually, a few captured Iraqi soldiers dragged me back on a stretcher. It was pitch dark but we were lit up by flares. I hadn’t even realised I was shot in the stomach at first.”

Back behind the trenches, he was not put on the first ambulance carrying the wounded because a captured Iraqi soldier was in dire condition and needed to be transported. This led to some Iranian soldiers to protest, but the commander did not budge. The next ambulance was so crowded that Bakhtiari said the wounded just piled on his shattered leg.

“I would scream at the top of my lungs when the truck hit bumps in the road, but the driver said he needs to deliver the wounded and he could drop me off if I’m in too much pain, after which I stopped.”

But even after that experience, he went back three more times.

“I remember there was a family gathering but I just packed up and said, ‘My friends need me on the front lines, I have to go.’ It’s interesting because when I was on the front lines I wanted to go back to Tehran to my family, but after a while, I couldn’t stay in Tehran because it felt as if I had lost something, I had left something there. I belonged there.” 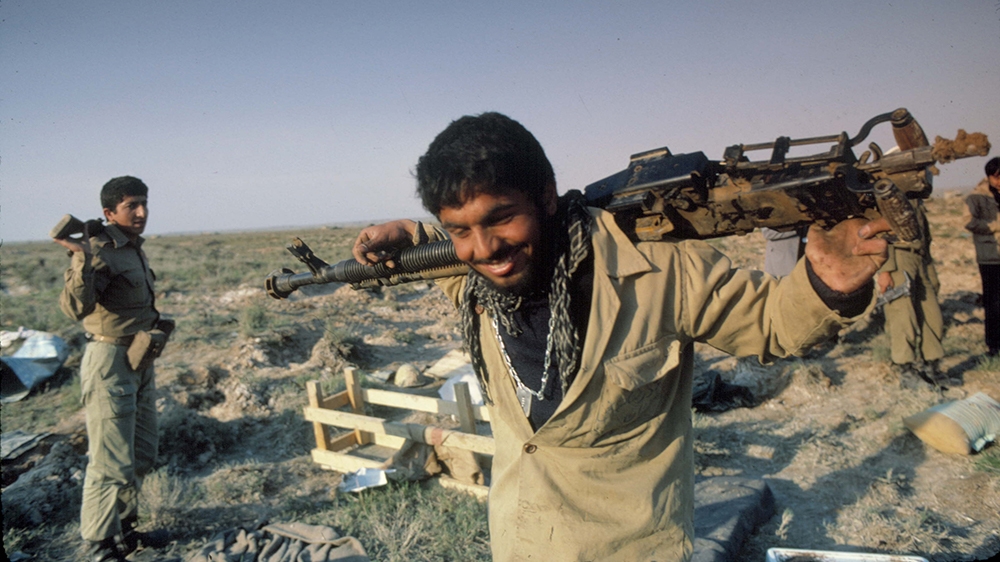 Bakhtiari, now with a 45 percent disability to his body, eventually found his fellow soldiers after days of searching. He describes how, one day, in a massive empty plain with no place to hide, they took cover under a truckload of ammunition just to avoid the burning sun.

“From the heat to being away from family to shortages of food, clothing and ammunition, it was a very difficult time,” he says. “It wasn’t that people in charge wouldn’t give it to us, there was none to give.”

“We were sanctioned by superpowers from the West and the East. We were not making war, we were just defending ourselves.”

Iran’s state-run television and different social media platforms were littered with tributes to memories of the war on Monday and those who laid down their lives.

Virtually all TV channels ran special programmes to mark the occasion, including images, video, interviews and documentaries depicting the war while featuring veterans.

On Monday morning, a live televised programme was organised to commemorate those who fought. It was attended by a plethora of army and Islamic Revolutionary Guard Corps commanders, government officials, and parliament members, among others. 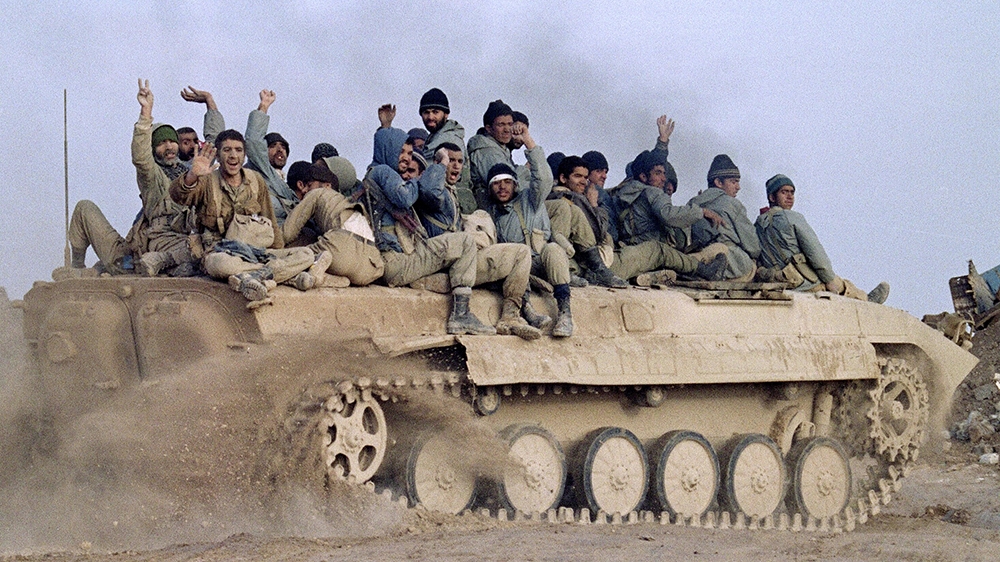 On social media, one user tweeted a picture of five Iranian soldiers heading towards the Iraqi army on a bridge in Khorramshahr, one day before the city fell. It captures their courage, she said, as they head towards the unknown “maybe just to repel Iraqi forces by one step”.

The same user also posted another heart-wrenching image, this time of a wounded soldier, wearing cheap sneakers instead of boots, who is lying next to the body of a fellow soldier while holding a hand up to indicate he is alive.

Veteran Morteza Moradian, a diplomat and former Iranian ambassador to North Korea and Denmark, posted a photo of himself and fellow soldiers from 1983, saying only two others aside from him are alive today.

Another user posted a picture of his father at the start of the war, saying “when the war finished, he didn’t look like this anymore.”

On Sunday, a gripping story about an Armenian Iranian soldier who went missing in action 33 years ago circulated in Iranian media.

Harach Hacoupian died in a military operation in western Iran, but his body was only discovered eight years ago. The body could not be fully identified and he was laid to rest one year later in Zahedan. After so many years, a DNA test finally confirmed it was him for his grieving parents. 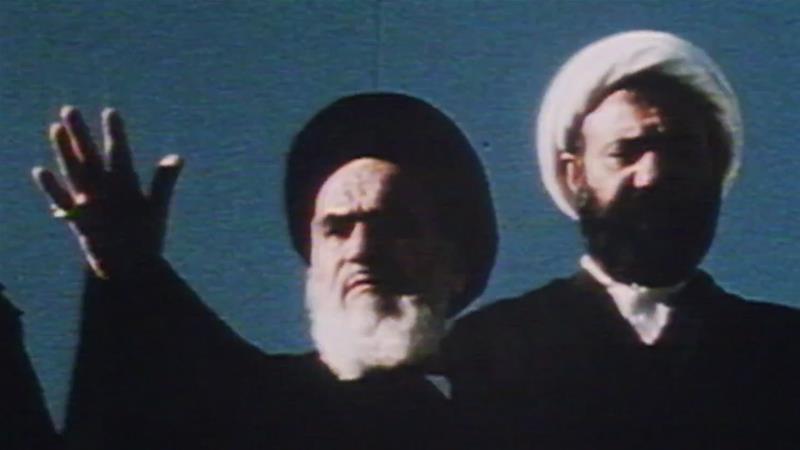 Iran 1979: Anatomy of a Revolution