The organisation has a long way to go until it can claim to fulfil promises made when it was founded in 2001. 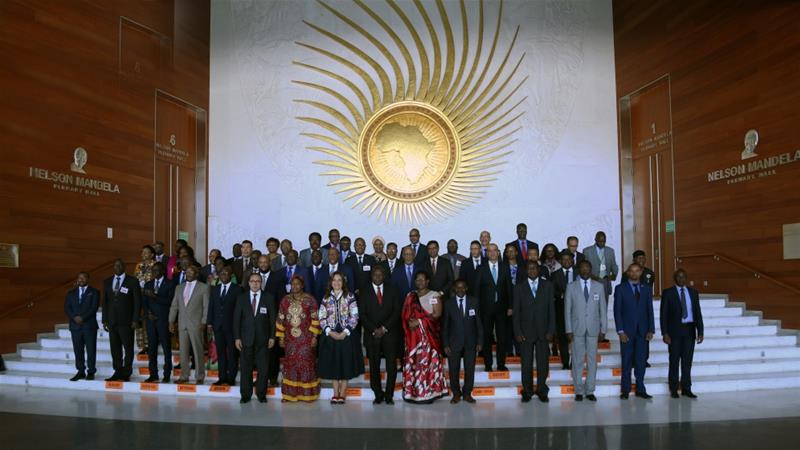 Addis Ababa, Ethiopia – The African Union leaders are meeting in Addis Ababa for their annual summit.

The pan-African body, comprising 55 member states, was founded in 2001 and launched a year later to much funfair and lofty ambitions.

The continental body replaced the Organisation of African Unity, established in 1963 to end colonialism in Africa.

The AU leaders promised African solutions to African problems. But has the organisation been successful?

At the time of launching, one of its objectives was to “promote democratic principles and institutions”, a tall order then and today.

In December 2018, when election results were disputed in the Democratic Republic of the Congo, the AU was caught flat-footed.

Felix Tshisekedi was named the winner. The AU said there were serious doubts about the outcome of the vote and called on Kinshasa to suspend the final results. The call was flatly rejected.

In 2015, Burundi President Pierre Nkurunziza went against his country’s constitution to run for a third term in office in a vote boycotted by the opposition.

Deadly violence followed. AU said it will send in 5,000 peacekeepers but Nkurunziza said he will consider the move an invasion.

The bloc backed down and said it will send observers instead.

AU’s current chairperson is Rwanda’s Paul Kagame who has been in power since 2000.

Following a referendum in 2015, Kagame can rule landlocked Rwanda until 2034. Uganda and Congo have also removed term limits for their long-serving leaders.

At the AU summit in Addis Ababa, Kagame is expected to be succeeded by President Abdel Fattah el-Sisi who overthrew Egypt’s democratically elected government in 2013.

Africa loses more than $140bn to corruption annually. That figure is equivalent to a quarter of the continent’s average gross domestic product (GDP), according to the AU.

Transparency International’s 2018 corruption perception index revealed six of the 10 most corrupt countries in the world are in Africa.

But the AU has vowed to crack down on corruption. The bloc’s 2018 summit theme was fighting corruption.

“This is unacceptable and must be addressed with immediate effect. Otherwise, the vision of achieving an Africa that is self-sustaining and prosperous will remain nothing but a dream.”

Conflict still affects many countries on the continent, from Mali in the west to Somalia in the east and South Sudan and DR Congo in the centre.

Shortly after its formation, the AU agreed to set up the African Standby Force (ASF). The force was created in order to be deployed in times of crises and to avoid reliance on the outside world when it came to maintaining peace in Africa.

In 2007, the AU sent troops to Somalia to back the government in Mogadishu fighting an al-Qaeda-linked rebel group.

The AU Mission in Somalia (AMISOM) pushed the armed group al-Shabab not just from the capital Mogadishu but from most parts of Somalia.

But AMISOM’s successes would not have been possible without the financial backing of the European Union and the United States. In 2015, the AU said it will fund 25 percent of its peace and security operations.

The AU also sent peacekeepers to Sudan’s southwest Darfur region in 2004 following a conflict between the government in Khartoum and the rebel groups.

But after failing to contain the violence and facing financial difficulties, the operation was merged with a United Nations mission in 2007.

Last week, the AU sponsored talks that led to a peace deal between the Central African Republic government and 14 rebel groups.

The AU also averted the political crisis in Madagascar and Comoros last year.

One of the biggest challenges that continues to face the AU is the lack of money to finance its big ambitions and pledges.

Currently, 72 percent of the AU’s budget is funded by external partners.

“Promoting peace and security is one of the core functions of our union. However, up to this point, we have lacked a credible mechanism to fund our priority operations in this domain. We depended too extensively on external resources,” President Kagame said last year.

An area that the bloc has seen relative success is the planned creation of a Continental Free Trade Area. Since last year, 19 countries have signed up to the agreement and turned it into a domestic law.

But the agreement needs signatures of at least 22 countries to take effect.

Sexual harassment is a major issue for women working at the AU, according to an internal investigation which found that interns, youth volunteers and short-term staffers were “exploited for sex in exchange for jobs”.

The investigation was launched in May 2018 after more than three dozen female staff complained anonymously about pervasive sexual harassment and gender discrimination.

In a statement following the investigation, the AU said that Moussa Faki, AU commission chair, will take “immediate action on urgent issues” such as acting appointments and will appoint a committee to look into 44 cases that the inquiry considered.

But an increasing number of experts and charity groups have called on the bloc to publicly release the report’s full findings.

“The report should not be an internal one. It should be made public because the AU is a public institution,” Apollos Nwofor, Pan Africa director for Oxfam International, told Al Jazeera.

“It is important that the report does a thorough job in calling out those responsible. They should be purged from the system. This is not about just coming to the office, it’s about people’s lives.”

The AU leaders’ meeting in Addis Ababa will be in agreement that they have a long way to go before they achieve the tall ambition they set themselves more than 15 years ago.