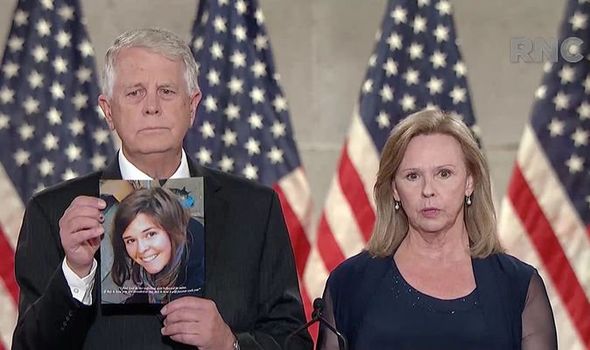 Carl and Marsha Mueller spoke at the Republican National Convention this week and said that the Obama administration was more worried about the Guantanamo Bay inmates than their daughter. Mrs Mueller said: “Our daughter Kayla was taken as a hostage and murdered by ISIS. From a young age, Kayla was amazing. She taught herself languages, how to write music, how to play guitar.

“She worked with troubled youth, military veterans, and Native Americans.

“Kayla had a gift to be able to see the world through someone else’s eyes.

“She became a humanitarian aid worker, and when she was helping children at an orphanage in India, Kayla wrote, ‘I find God in the suffering eyes reflected in mine. If this is how you are revealed to me, this is how I will forever seek you.’”

In 2012 Kayla Mueller travelled to Turkey to help Syrian refugees.

In August the following year, another aid worker asked her if she would consider helping at a hospital in Syria. 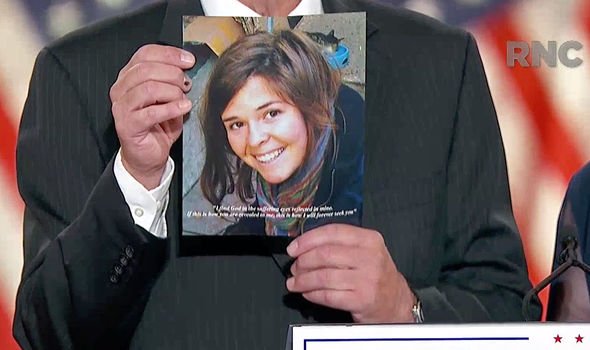 If Donald Trump had been president when Kayla was captured, she would be here today

The young American did not hesitate.

On August 4, 2013 she was kidnapped by Isis terrorists.

Mr Mueller told the Republican audience: “Kayla was mostly held in a 12×12 cell in solitary confinement. It was cold and dirty.

“They shaved her head, they beat her, and tortured her.

The leader of Isis, Abu Bakr al-Baghdadi, raped her repeatedly. 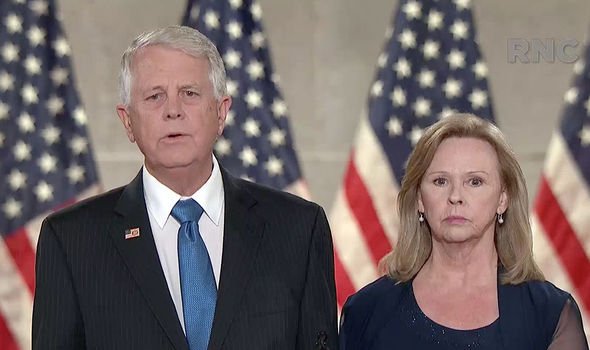 “For 18 months, she endured, and we endured in agonising back-and-forth between us, the Obama administration, and Isis.”

“We put all our faith in the government, but the government let us down. President Obama refused to meet with us until Isis had already beheaded other Americans.

“To this day, we never heard from Joe Biden. Instead, the Obama administration hid behind policy so much that we felt hopeless when they kept us from negotiating to save Kayla’s life. The administration showed more concern for the terrorists in Guantanamo than the American hostages in Syria. 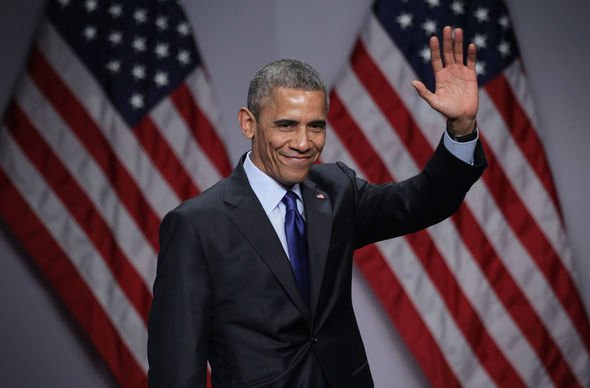 “After 18 months of brutal torture, we learned from Isis that Kayla had been killed.

“The Obama administration kept telling us they were doing everything they could, but their version of everything wasn’t enough.”

He said: “What a difference a president makes. Under President Trump, US Army special operators conducted a raid on al-Baghdadi’s compound.

“After we learned that al-Baghdadi was killed, we learned something else: the operators named themselves Task Force 814, after August 14, Kayla’s birthday. And the mission was named Operation Kayla Mueller. To those soldiers, thank you. Kayla was looking down on you.”

“The Trump team gave us empathy we never received from the Obama administration.

“The Obama administration said it was doing everything it could; the Trump administration is. Let me just say this—Kayla should be here. If Donald Trump had been president when Kayla was captured, she would be here today.”