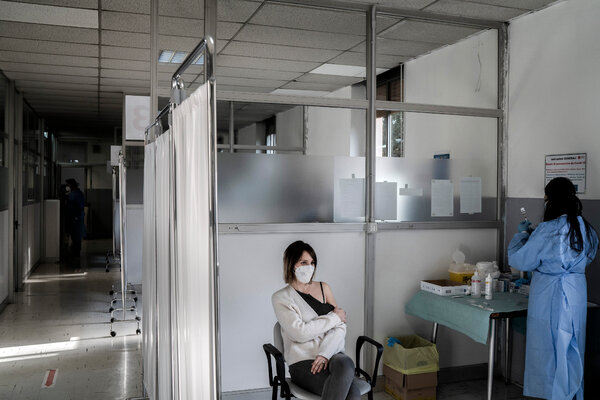 Italy will stop administering AstraZeneca’s Covid vaccine to people under the age of 60, the Italian government announced on Friday, amid a drop in the country’s level of infections that meant the risks of distributing the vaccine to younger people was judged to outweigh the benefits.

The AstraZeneca vaccine has been under scrutiny after a smattering of reports of rare and severe blood clots in those who had received the vaccine emerged in Europe.

Younger Italians who have already received one dose of the AstraZeneca vaccine will get a different shot for their booster dose, said Francesco Paolo Figliuolo, an army general in charge of Italy’s vaccination effort, during a news conference. He added that the change would have minimal impact on the country’s vaccination rollout.

The announcement was the latest in a series of reversed decisions about the use of the AstraZeneca vaccine, which was developed with Oxford University. Some doctors worry that the back and forth could further undermine the trust in the vaccine, and hamper Italy’s inoculation campaign.

Government regulators and AstraZeneca “communicated very very badly,” Roberto Burioni, one of Italy’s leading virologists, said in an interview. “We are losing the trust of even the most enthusiastic people.”

In Italy, as in other European countries, the rollout of AstraZeneca’s vaccine has been rocky. After the European Union approved its use in January, Italy recommended its use only for people under the age of 55.

The country then raised the threshold to 65 on Feb. 22, and then dropped the age limit March 8. A week later, Italy become one of a number of European countries to suspend using the vaccine altogether over concerns about the reports of rare, severe blood clots that afflicted a small number of recipients,.

Italy resumed using the vaccine March 19, but about two weeks later, after the European drug regulator reported a possible link to the rare blood clots, the government recommended reserving the vaccine for those over 60.

However, some Italian regions, in a rush to vaccinate as many people as possible, started offering AstraZeneca vaccines to younger people during “open day” and “open night” events that skipped the government’s priority schedule. Tens of thousands of young Italians signed up. In May, the board of scientific advisers to the government gave the reenlight to the “open” initiatives.

But some doctors raised objections, and news spread of an 18-year-old girl who had received a dose in the northern region of Liguria, was hospitalized with thrombosis and then died. On Friday, the government said the recommendation to only give the AstraZeneca vaccine to people over 60 had now become “mandatory.”

Franco Locatelli, the president of Italy’s Superior Health Council, said that the changes in the guidelines had always depended on the evolution of the available scientific evidence but also hinged on the level of virus circulation.

Dr. Locatelli maintained that “vaccines saved many lives,” and that AstraZeneca’s shot, which was largely used in Britain, yielded results “that we were jealous of.”

Mr. Burioni, the virologist, said he was moved by the enthusiasm of young people who rushed to get vaccinated at the open days to protect older Italians. “But now many of these young people and many of their parents are very worried,” he noted.