A state of emergency has been declared throughout the oil-rich country of Kazakhstan, according to the RIA news agency, after widespread protests broke out.

Protesters have seized the airport in Kazakhstan’s biggest city, according to reports.

Russia’s Tass news agency said the president’s residence in Almaty, where thousands of demonstrators gathered outside on Wednesday, was engulfed in flames. Elsewhere, a building that includes the mayor’s office was also burning from top to bottom, and the prosecutors’ office had been set alight.

Meanwhile, all flights to and from Almaty were temporarily cancelled, a source told Reuters, because of the situation at the airport. 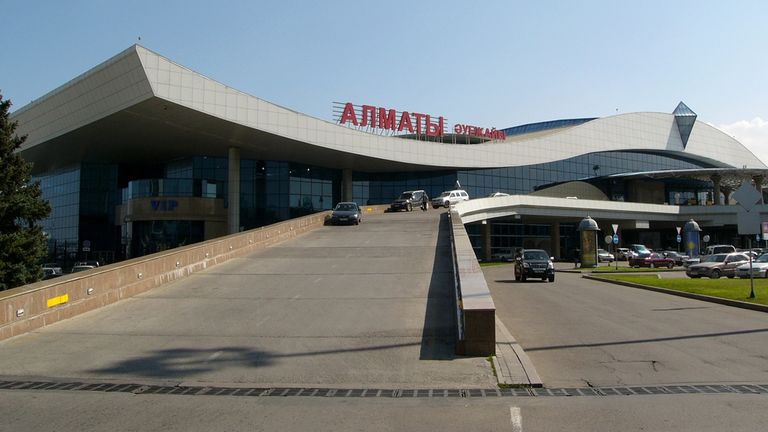 At least one international airline confirmed it had suspended its service to the city, but Lufthansa, Qatar Airways and flydubai, which operate regular flights to Kazakhstan, separately said they were monitoring events.

The situation appeared to have deteriorated after three separate local states of emergency were earlier declared across the former Soviet state.

There was one in the capital Nur-Sultan, another in former capital Almaty, and in the western Mangistau province, where much of the country’s rich oil reserves are extracted.

Mr Tokayev said he had taken over as head of the powerful Security Council from the former all-powerful president Nursultan Nazarbayev, who resigned in 2019 but retained considerable influence.

Separately, the White House has urged calm and restraint amid the seemingly deteriorating situation.

Analysis: Anger behind protests sweeping across the country will not be easy to quell Why are people protesting?

The demonstrations erupted after a cap on energy prices was removed, doubling the cost to Kazakhs of liquified petroleum gas, which many people use to power their cars, from 50 tenge (10p) a litre.

The government justified the change by saying the previous set price was unsustainable.

Police in Almaty used tear gas and stun grenades to drive hundreds of protesters out of the main square.

Clashes went on for hours late into the night on Tuesday in nearby areas and a state of emergency was declared – including a curfew, restrictions on movement, and a ban on mass gatherings.

Mangistau province was also the scene of mass protests, where Chevron confirmed to Sky News that it was working to end a stoppage at its Tengizchevroil venture. 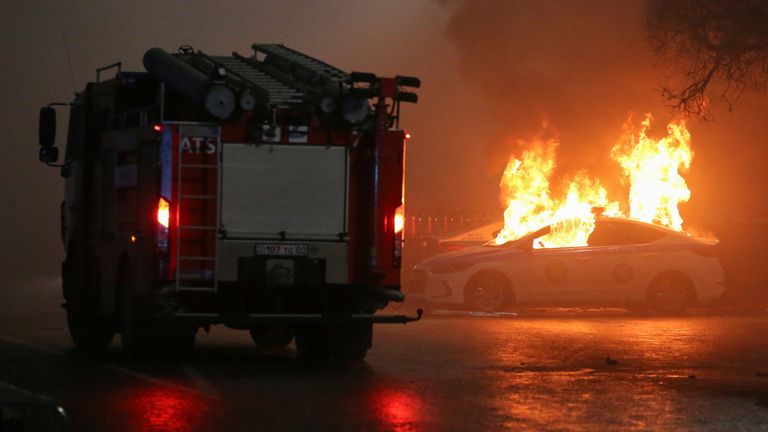 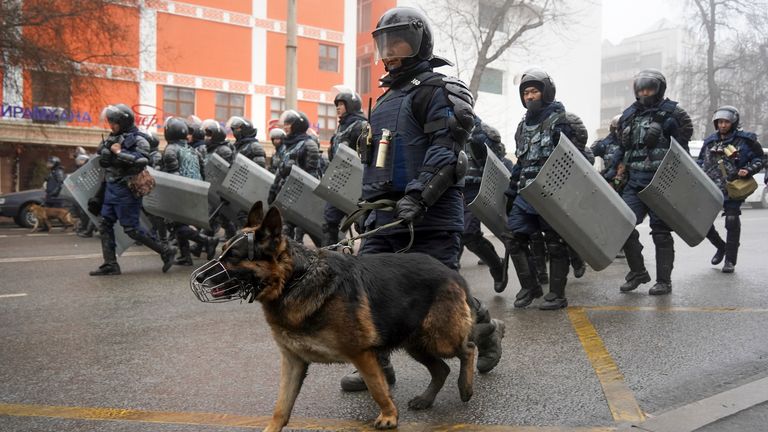 On Wednesday morning (around 3am UK time), President Tokayev accepted his government’s resignation.

As he did so, he ordered the government to regulate prices of fuel and other “socially important” goods, rolling back on the gas price hike which sparked the demonstrations.

But in the hours after, protesters armed with clubs and metal bars stormed into the mayor’s office of Almaty.

Protesters appeared to break through the security forces’ cordons despite the use of the stun grenades, and gunfire and explosions could be heard throughout the city centre.

The local police chief claimed “extremists” were attacking Almaty, and had “beaten up 500 civilians”.

The police were joined by units from the National Guard and army as they attempted to bring order to the city.

In a TV address, Mr Tokayev promised to respond with “maximum toughness” to the protests and did not mention Mr Nazarbayev by name. The 81-year-old former president has not been seen or heard from in public since the start of the protests, and Mr Tokayev’s assuming control of the Security Council appeared to mark the sidelining of the former president.

He had been in control from the collapse of the Soviet Union in 1991 until just over two years ago.

It was unclear if Mr Nazarbayev’s replacement would satisfy the protesters. 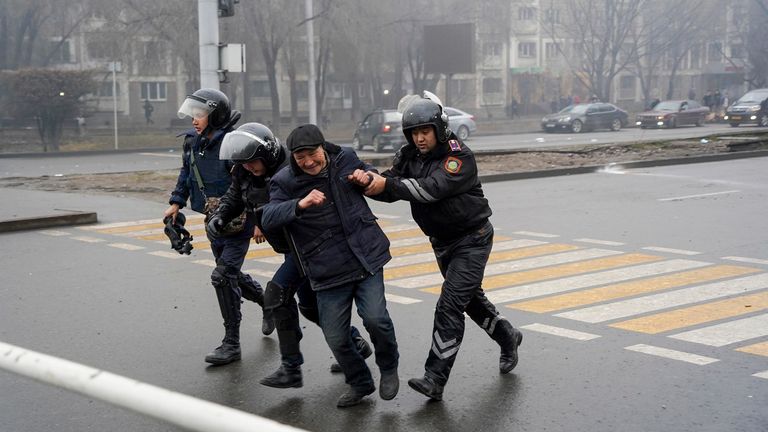 Kremlin spokesman Dmitry Peskov in Moscow said it was important that Kazakhstan solved its own problems and that no one should interfere from outside.

At around the same time, Russian news site Lente.ru reported that a Russian military Il-76 transport plane, of the type usually used for moving supplies and people, had landed in Almaty.

During Mr Nazarbayev’s three decade-long rule, Kazakhstan attracted hundreds of billions of dollars of foreign investment in its oil and metals industries.

About a fifth of Islam-majority Kazakhstan’s population are Russians, the descendants of those who moved there in the Soviet era.