The Soviet Union’s Tsar Bomba, or “King of Bombs,” truly lived up to its name, as new footage of the largest-ever nuclear explosion shows.

Russia recently declassified a Soviet-made documentary about the nuclear weapon, which exploded in a massive fireball over a remote test site in the Arctic on Oct. 30, 1961. The hydrogen bomb detonated with the force of 50 megatons of TNT, flattening everything on the small archipelago where it was tested and shattering brick and wood homes over 50 kilometres away.

The blast was like 3,300 Hiroshima bombs detonating all at once, and twice as powerful as the next-largest nuclear detonation in history.

It was an explosion for the sake of an explosion; an awesome and unmatched display of nuclear power during the USSR’s Cold War-era arms race with the United States.

Nuclear treaties prohibit such a weapon from ever being used again, and the U.S. has never detonated anything more powerful than 15 megatons. That means the Tsar Bomba will — hopefully — reign forever.

The footage shows two planes — a release plane and a research aircraft — flying over the Novaya Zemlya, a deserted archipelago above the Arctic Circle in the USSR. The release plane drops the 27-ton Tsar Bomba with a parachute, and the bomb slowly drifts down to Earth while military officials count down to the explosion.

“Three seconds remaining!” a voice says in Russian, as the bomb drifts down to the detonation point. “Two. One. Zero!”

The Tsar Bomba detonates 4 km above the ground, generating a tremendous fireball before briefly whiting out the camera with its flash.

The footage shows the flash filling up the cockpit of the release plane, which was 45 km from the drop point.

“The flash and the following fluorescence, despite the cloud cover, has been visible within a radius of 1,000 kilometres,” the Russian narrator says. 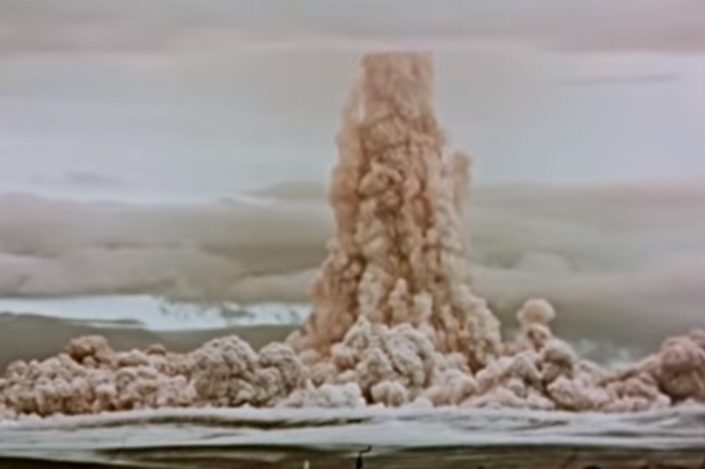 A massive, 10 kilometre-wide column of dust reaches up into the sky, a fire dome peeks above the clouds and then is replaced by a mushroom cloud reaching 60 to 65 km into the atmosphere, according to the footage. The mushroom cloud can be seen from a distant aircraft circling the site.

“Its diameter was 90 kilometres,” the narrator says of the mushroom cloud. 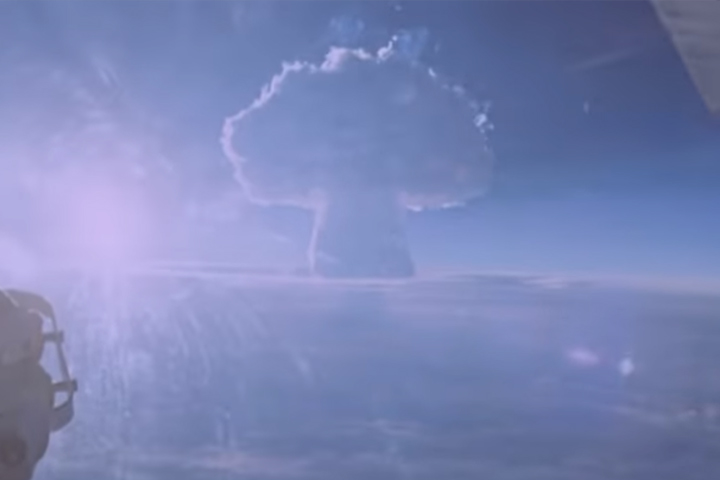 The footage also offers a brief glimpse of the test site before and after the bomb. The before view shows a frigid, ice-covered plain, while the after images reveal a brown, scorched landscape with pools of water and ice scattered between blasted hilltops.

“It has changed a lot,” the narrator says. “Tens of kilometres around are covered by ground scorched by the explosion.”

The Tsar Bomba was developed in the middle of the Cold War, and its explosive force would have been enough to wipe out the entire metropolitan area around some of the largest U.S. cities, including New York, Chicago or Washington, D.C.

The full documentary is posted on Rosatom’s YouTube page.

No one was killed in the blast.