Malaysian Prime Minister Muhyiddin Yassin’s ruling coalition has won a key state election, in a vote that was widely seen as a referendum on his seven-month-old administration.

The victory in Sabah state in Borneo is likely to strengthen Muhyiddin’s position as he faces a leadership challenge from opposition leader Anwar Ibrahim, who said this week he had the parliamentary majority needed to overthrow the prime minister.

Muhyiddin’s Perikatan Nasional (PN) coalition and its allies won 38 of the 73 seats up for grabs in Saturday’s election, narrowly taking control of the previously opposition-held state.

Muhyiddin said earlier that victory in Sabah could pave the way for early national elections aimed at ending uncertainty over the stability of his ruling alliance, which has a two-seat majority in parliament.

Analysts had warned defeat in eastern Sabah state for Muhyiddin could have meant the end of his fractious coalition government.

Muhyiddin came to power in March after forming an alliance with opposition parties following the shock resignation of his predecessor, Mahathir Mohamad.

Muhyiddin’s opponents have accused him of stealing power by shifting alliances, instead of at the ballot box, and his allies have been pressuring him for months to call snap national polls to secure a strong mandate.

While the outcome does not directly affect the balance of power at the national level, it was a key test of Muhyiddin’s popularity.

If he had done poorly, coalition partners may have withdrawn their support from his government and forced a snap national poll. 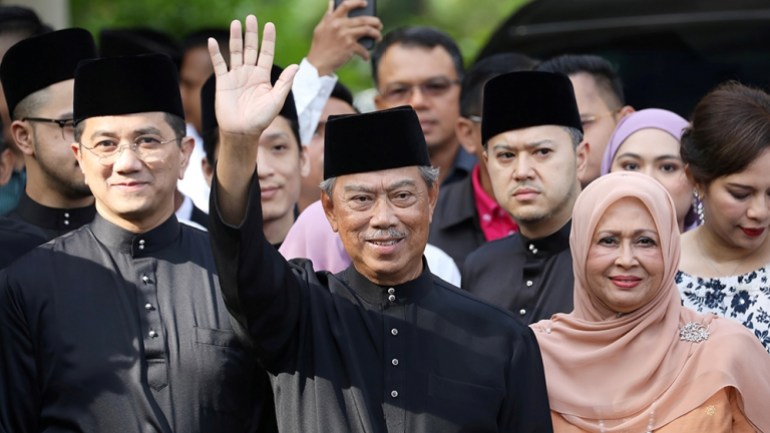 But Bridget Welsh, a Malaysia expert from the University of Nottingham, warned that Muhiyddin’s troubles were far from over.

“He passed the first major electoral test, but barely,” she told AFP news agency. “He remains a man on borrowed time.”

Muhyiddin has refused to reveal the number of MPs backing him while the king, who appoints the country’s premier, has postponed an appointment to see him due to ill health.

“He will use the victory to dismiss any challenge to federal leadership. Muhyiddin can now confidently lead a federal coalition in a general election,” Adib Zalkapli, a director with political risk consultancy BowerGroupAsia, told Reuters news agency.

On Wednesday, Anwar declared that he had secured a “formidable” majority to claim the premiership – something Muhyiddin dismissed as a “mere allegation”.

The power struggle comes as the Malaysian economy reels from the impact of the COVID-19 pandemic.

Muhyiddin has announced a stimulus package of 305 billion ringgit ($73.16bn), including additional measures announced just three days ahead of the Sabah polls.