The Met Office has issued yellow warnings for snow, ice and rain today (Monday, January 11) until tomorrow. The Met Office is forecasting a “rapid freeze”, and the meterological agency has issued a widespread yellow ice warning. The warning covers Scotland and much of northern England from 3pm today until 11am on Tuesday.

The ice warning reads: “Rain and snow will clear southwards later Monday and overnight into Tuesday, with a rapid freeze following.

“Some hilly areas will see a further cover of 1-3cm snow beforehand.

“Ice will become widespread over northern Scotland from around dusk, much of the rest of Scotland by late evening or the early hours, and across northern England later in the night.”

Today a yellow snow warning has also been issued for parts of Scotland, including areas within Grampian and Highland and Eilean Siar, from 9am until 8pm this evening. 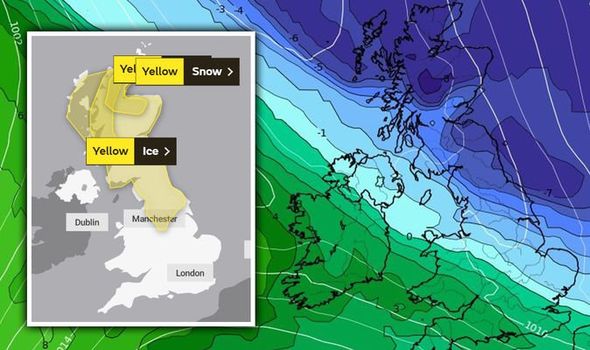 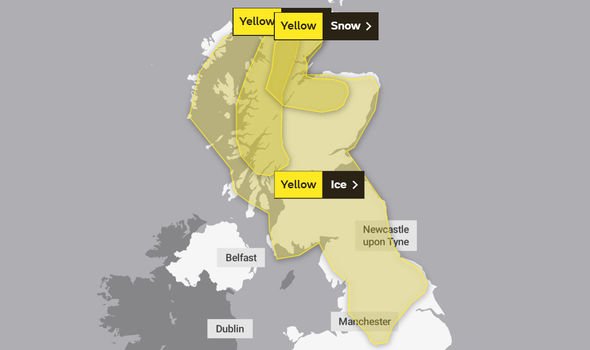 The Met Office snow warning states: “Outbreaks of rain will turn to snow across North Highland during the morning, then parts of Strathspey, Moray and western Aberdeenshire in the afternoon.

“This is likely to bring 2-5cm on higher ground above 150m and perhaps up to 10cm on highest roads above 300m, while 1 or 2cm could accumulate at low levels in places.

“Drier, clearer conditions following from the north in the afternoon and evening will then lead to a freeze and some icy stretches.”

Parts of northern and western Scotland are also currently under a yellow rain warning, which is due to expire at 6pm today. 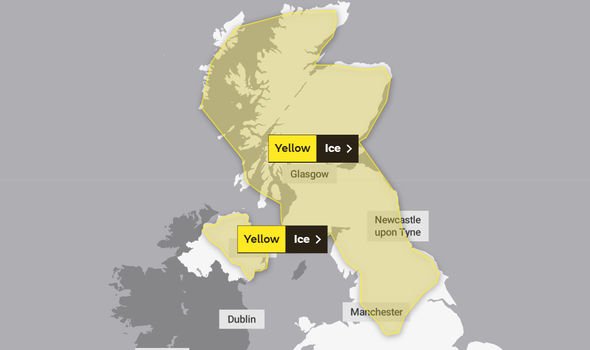 The Met Office warn up to approximately three inches (80mm) of rainfall could accumulate in the warning zone.

The rain warning reads: “Rain will become persistent and heavy at times during Sunday, continuing on Monday.

“Rainfall accumulations of 60 to 80mm are expected over high ground.

“In addition, there will be a thaw of lying snow adding to the flooding and travel difficulties. The rain will turn back to snow on high ground from the north later on Monday before clearing.”

This is a breaking story, refresh for updates.