Met Office weather forecasters have issued further warnings for the UK today as a weather system unleashes widespread rain across the country. Despite a relatively warm and dry October, the weather seems to have taken a turn for the worse, with steadily dropping temperatures and now days of predicted rainfall. Forecasters with the agency believe steady rainfall coupled with strong winds could lead to potentially dangerous conditions in some parts of the country.

The Met Office has now issued three separate warnings for the UK today.

Two have now come into force in the southeast for wind and rain, with another for eastern Scotland.

Each came into effect at different times this morning, and will last for a different duration.

But they will also bring equally adverse and potentially dangerous conditions. 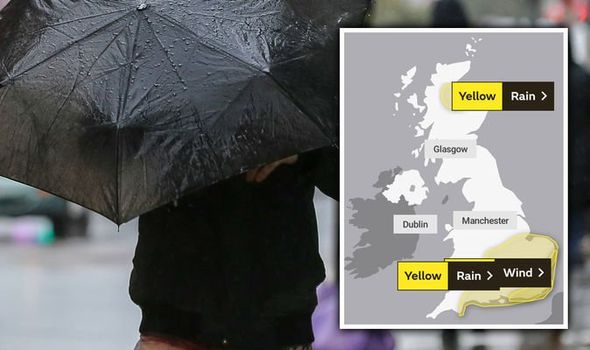 The first, a rain warning which came into effect at 3am and will last until 2pm, has warned of potential flooding for the entirety of southeast England.

The Met Office said heavy rain could cause flooding with a maximum of 50mm (two inches) of water, and roughly 0.5 inches everywhere else.

Their warning reads: “Heavy rain will move north during the early hours of the morning and persist through the peak morning travel period, before clearing northeastward.

“With much of this falling in a short period, around 3 to 6 hours, some surface-water flooding is likely in places, leading to disruption to travel.

“The rain may be accompanied by gales across parts of southeast England, perhaps most likely towards the Kent and Sussex coasts.”

Forecasters expect the rain could scupper public transport, resulting in delays for trains and cars.

Flooding could frustrate travel times, but could also spill into homes in the warning area.

An additional warning for wind came into place along the southeast coast from Norwich to Brighton which warned of excessive gale-force winds.

The warning, which is in place from 7am to 5pm, reads: “Strong southwesterly winds will develop on Wednesday morning, peaking around midday before gradually easing from the west during the afternoon. Winds are likely to to gust to 45 to 55 mph inland and to 65 mph near the coast.”

Wind will cause many of the same problems as the rain, with delays to travel, and potential spray and high waves on the coast.

Scotland will also suffer from heavy rain later this afternoon, as the Met Office levelled a yellow warning on the east of the country from 4pm.

Significant rain falling in a short time period could cause flooding although roughly half an inch less than in southeastern England.

The warning reads: “Further rain is expected through Wednesday afternoon and overnight into Thursday with some heavy bursts at times. 10 to 20 mm (0.5 inches) is likely widely but 30 to 40 mm (1.1 to 1.5 inches) can be expected in a few locations.

“Some of this will fall in a short period, causing localised flooding. The rain will slowly ease on Thursday morning.”

Rain will fall over the area until early tomorrow morning at 8am, ending the latest run of warnings.