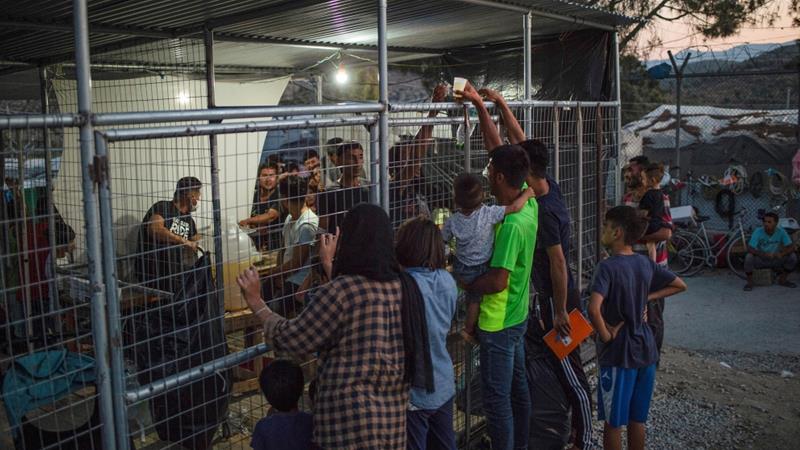 Authorities in Greece have placed the Moria refugee camp on the island of Lesbos under quarantine after the confirmation of the first coronavirus infection in the notoriously overcrowded facility.

The Ministry of Migration and Asylum said in a statement on Wednesday that a Somali refugee, 40, had tested positive and was being treated at a hospital in Mytilene, the main town of the island.

Media reports said he was in good health.

Public health authorities were trying to trace the people he had contacted, while the camp would be sealed until September 15, with only “security personnel” granted access after temperature tests.

Moria, a former military base that opened as a centre to register new arrivals at the height of the refugee crisis in 2015, was designed to hold no more than 3,000. But is now at least at four times its capacity, with many asylum seekers also sleeping in tents in an olive grove outside its walls.

The camp has been repeatedly criticised by aid groups for poor living conditions.

Greece has recorded a total of 10,524 confirmed COVID-19 cases since the first infection was logged in February, and 271 related deaths.

In recent weeks, it has seen a surge in cases, forcing authorities to impose some restrictions to curb the spread of the virus.

Several non-fatal coronavirus cases have surfaced in Greek camps on the mainland, including 150 infections at a migrant hotel in the Peloponnese in April.

Last month, another infection in a camp on the island of Chios was reported involving a 35-year-old man from Yemen.

Overall, there are nearly 24,000 people in five island camps built to handle fewer than 6,100.

Aid groups, including the UN refugee agency, have repeatedly urged Greece to reduce congestion at the camps. Meanwhile, many refugees have been unable to find lodgings and jobs after leaving the camps, with housing and cash benefits recently scaled back.

New arrivals on the islands are quarantined in separate buildings to limit the risk of contaminating entire camps, which are nominally under lockdown until mid-September, with access severely restricted.

On Lesbos, medical charity Doctors Without Borders (Medicins Sans Frontieres, or MSF) in July said it had been forced to shut down a coronavirus isolation centre serving the local camp due to a planning dispute.

The group has criticised the camp lockdown, which has been repeatedly renewed since March, as “discriminatory” and “counterproductive”.

The Ministry of Migration and Asylum said on Wednesday a new isolation unit for Moria would be available later this month.

In has ferried thousands of asylum seekers to the mainland in past months, while others have been granted refugee status and allowed to travel off the islands.

Greece has suffered less from the coronavirus than other European countries, and so far nobody has died of the disease in a migrant camp.

The infection rate accelerated in August, which accounted for more than half of Greece’s confirmed cases.

Authorities have blamed the spike in infections to the flouting of physical distancing rules in restaurants, bars and public gatherings.

The civil protection agency has made masks compulsory in all indoor public areas.

The government has ruled out a general lockdown after gradually reopening the economy in May and starting to accept foreign arrivals in June to salvage part of the tourism season which is vital to the economy.