While millions of Americans weighed their options between Donald Trump and Joe Biden during Tuesday night’s debate, many were considering a third option: move to Canada.

Google data shows a huge spike in “move to Canada” as a search term on Tuesday night, with traffic exploding shortly after the debate started at 9 p.m. Eastern Time.

Traffic dipped overnight, then surged again as Americans woke up from a night that they would probably rather forget. 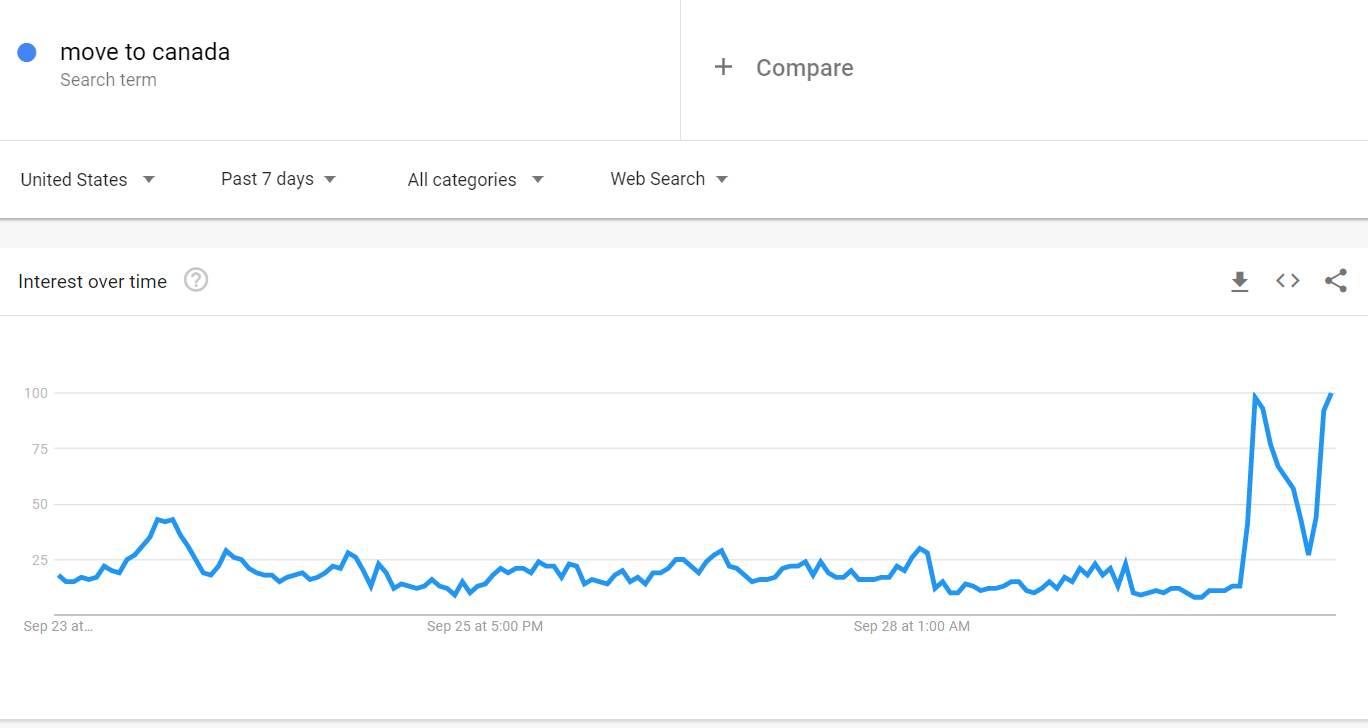 Interest was highest in Oregon, the West Coast state currently grappling with a devastating string of wildfires. Americans in Vermont, Colorado, Washington and Minnesota were also very curious about packing their bags and moving north.

Searches also spiked around moving to New Zealand on Tuesday, though the idea did not pick up again on Wednesday morning.

Google data only shows the relative volume of search traffic, and not the overall number of searches. However, the data clearly shows that Canada was on people’s minds amid America’s latest partisan fight.

The first debate was, by any historical measure, a chaotic mess. President Trump repeatedly talked over his opponent, disputed basic facts and picked fights with the moderator, Fox News’ Chris Wallace, in open defiance of the ground rules. Biden, meanwhile, lapsed into squinty-eyed grins and chuckles amid the pressure, and occasionally lashed out to call Trump a “clown.”

“Would you shut up, man?” he said at one point.

CNN’s Dana Bash seemed to capture the spirit of the night with a rare on-air curse word after the debate.

A pro-Canada movement also began emerging on Twitter during the 90-minute debate.

“This is a 90-minute commercial for Canada,” one user wrote, in a tweet that garnered thousands of likes.

It’s not the first time a large group of Americans considered moving to Canada. Conversation around the idea spiked during the last U.S. election campaign, though it’s unclear how many Americans actually followed through.

Americans were also considering a move during the summer amid the rising COVID-19 death toll under Trump, immigration lawyers told Global News.

Canada has its own problems and is far from a utopia, as many Canadians pointed out on Twitter.

However, the country is doing a demonstrably better job of fighting COVID-19 compared to the United States, which has seen more than 200,000 deaths to date. It’s also not staring down an election in the midst of a pandemic.

The U.S.-Canada border remains closed due to the coronavirus, which means it’s unlikely that Americans will be able to move north — at least until the virus is under control.

In other words, there’s only one thing Canadians can say to their worried U.S. neighbours right now: Sorry.