Fighting between Myanmar’s military and the Arakan Army has displaced more than 5,000 people since December. 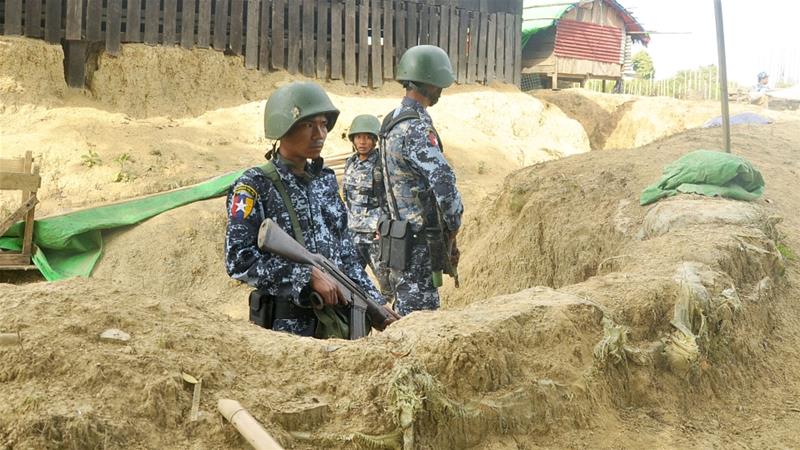 Scores of ethnic-minority villagers have crossed from western Myanmar into Bangladesh in recent days amid fighting between the Myanmar military and ethnic Rakhine rebels, according to Bangladesh border guards and an activist.

Members of 38 families said they fled their homes fearing attack from military helicopters, Colonel Zahirul Haque Khan, the Border Guards Bangladesh commander in Bandarban district where the group of 136 people are now living in shelters, was quoted as saying by Reuters news agency on Thursday.

Fighting between Myanmar’s military and the Arakan Army has displaced more than 5,000 people in parts of Rakhine and Chin states since early December.

Myanmar’s leaders have vowed to crush the rebels, who want autonomy for Rakhine State, and blocked most aid agencies from reaching the area, raising fears of more civilian suffering in an area long scarred by complex ethnic divisions.

While Rakhine State is majority Buddhist, in 2017 attacks on security posts by a small armed group seeking an end to decades of persecution of the country’s Muslim Rohingya minority provoked a military crackdown that forced 730,000 people from their homes and into camps in Bangladesh’s Cox’s Bazar district, according to the United Nations.

Win Thein, a member of the non-governmental Bangladesh Human Rights Commission, said he had visited the refugees, who are members of the Khumi, Cho and Rakhine ethnic groups.

They had crossed into Bangladesh on Sunday and Monday after fleeing from two villages in Chin state’s Paletwa township after they heard gunfire and saw helicopters nearby, he said.

Some villagers said they later witnessed Myanmar soldiers looting and setting fire to homes, he said.

Win Thein said some of the refugee children were seriously ill and had no access to medical care.

“There are no blankets at all and it is very cold,” he said.

State media in Myanmar said on Friday the Arakan Army had “taken about 200 Rakhine and other ethnic nationals including 38 schoolchildren to Bangladesh territory”.

An announcement carried in official newspapers said the government was providing humanitarian assistance to displaced people and said the rebels might have taken the people into Bangladesh to “create misunderstanding between the two neighbours”.

Khine Thu Kha, an Arakan Army spokesman based outside Myanmar said the armed group had helped the displaced villagers to reach the border, but did so because the villagers feared being arrested by the military.

The government was using “fake news” to cover up military abuses, he said.

On Tuesday, Bangladesh summoned Myanmar’s ambassador to protest over the new arrivals, according to a senior Bangladesh foreign ministry official.