WASHINGTON — Federal officials, showing how rapidly the Biden administration is overhauling climate policy after years of denial under former President Donald J. Trump, aim to free up as much as $10 billion at the Federal Emergency Management Agency to protect against climate disasters before they strike.

The agency, best known for responding to hurricanes, floods and wildfires, wants to spend the money to pre-emptively protect against damage by building seawalls, elevating or relocating flood-prone homes and taking other steps as climate change intensifies storms and other natural disasters.

“It would dwarf all previous grant programs of its kind,” said Daniel Kaniewski, a former deputy administrator at FEMA and now a managing director at Marsh & McLennan Companies, a consulting firm.

The FEMA plan would use a budgeting maneuver to repurpose a portion of the agency’s overall disaster spending toward projects designed to protect against damage from climate disasters, according to people familiar with discussions inside the agency.

In the past year FEMA has taken a leading role in fighting Covid-19 — and the agency’s plan is to count that Covid spending toward the formula used to redirect money to climate projects. Doing so would allow the Biden administration to quickly and drastically increase climate-resilience funding without action by Congress, generating a windfall that could increase funding more than sixfold.

Michael M. Grimm, FEMA’s acting deputy associate administrator for disaster mitigation, said the agency’s initial estimates suggested that as much as $3.7 billion could be available for the program, called Building Resilient Infrastructure and Communities, or BRIC. By comparison, that program so far has just $500 million to award in grants.

More of that $3.7 billion “may be forthcoming,” Mr. Grimm said in a statement.

But the amount of new money could potentially climb to as much as $10 billion, according to some estimates, if FEMA also decided to count Covid dollars toward a similar fund, the Hazard Mitigation Grant Program, designed to help communities rebuild after a disaster. Mr. Grimm said the decision to provide that funding has not yet been made. 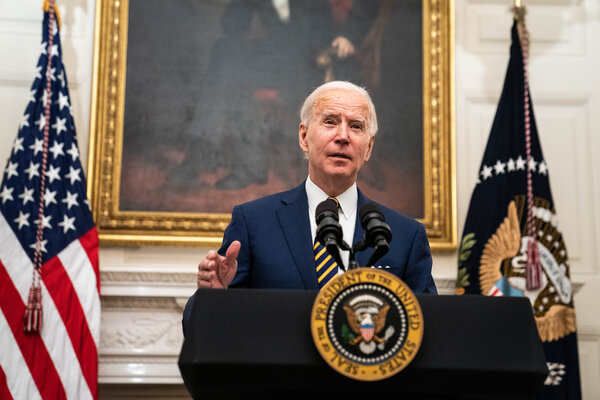 The proposal wouldn’t necessarily reduce the money available to address Covid, according to people familiar with the plan. Rather, it would give FEMA the ability to draw additional resilience money from the government’s dedicated disaster fund, which Congress routinely replenishes once the fund is drawn down.

FEMA’s plan would need to be approved by the White House budget office. After Mr. Biden’s win, members of his transition team said they saw the new funding as a way for the incoming administration to make good on its promise to address climate change.

A spokesman for the White House, Vedant Patel, did not respond to requests for comment.

The proposal marks an effort by the Biden administration to address what experts call climate adaptation — an area of climate policy that’s different from reducing greenhouse gas emissions and focuses on better protecting people, homes and communities from the consequences of a warming planet. Those include more frequent and severe storms, flooding and wildfires, as well as rising seas.

The United States has a mixed record on that front.

In many coastal states, home construction is increasing the fastest in the most flood-prone areas, including places that could soon be underwater. And despite strong public support for tougher building codes in high-risk areas, just one-third of local jurisdictions have adopted disaster-resistant provisions in their building codes.

Faced with rapidly escalating disaster costs, the Trump administration took some steps to make communities more resilient to the effects of climate change, even if it refrained from using that term. FEMA and other agencies increased their focus on getting people to move away from vulnerable areas, rather than always paying them to rebuild in place. And the agency urged Congress to create the BRIC program to help cities and states increase their preparedness before a disaster, rather than after.

But federal officials were also hamstrung by Mr. Trump’s insistence that climate change was overblown.

In 2018, when FEMA issued its four-year strategic plan for dealing with disasters, the words “climate change” were nowhere to be found. Faced with year after year of record wildfires in California, Mr. Trump said the problem was too many leaves on the forest floor. Told that rising temperatures were exacerbating the problem, Mr. Trump responded: “It’ll start getting cooler. You just — you just watch.”

As a candidate, Mr. Biden promised to focus on climate adaptation. And on his first day as president, he signed an order imposing higher construction standards on buildings or infrastructure in flood zones that are built with federal money. The order, first imposed by President Barack Obama, was rescinded by Mr. Trump.

Mr. Biden’s move won praise from disaster groups. “This action restores a forward-looking policy that will help ensure that taxpayer dollars aren’t washed away by the next flood,” Forbes Tompkins, who works on federal flood policy with the Pew Charitable Trusts, an advocacy group, said in a statement.

But sending billions of dollars of new money into FEMA’s disaster programs would go further than simply reinstating Obama-era adaptation policies. The BRIC program was created in the aftermath of the brutal disaster season of 2017, when the United States was struck in quick succession by Hurricanes Harvey, Irma and Maria, as well as wildfires in California that were then the worst on record. Federal disaster spending skyrocketed.

A few months later, federal researchers reported that for every $1 the government spent to protect a community before a disaster, it saved $6 later. In 2018, Congress created the program to take advantage of those savings by providing more money upfront. The first grants were set to be awarded this year.

If the Biden White House approves the plan, it may find allies in Congress, even among Republicans.

Using Covid funds to increase that money has received bipartisan support in Congress in the past. In October, Representative Peter A. DeFazio, the Democratic chairman of the House Committee on Transportation and Infrastructure, which has jurisdiction over FEMA, sent a letter to the agency urging it to use the Covid money.

That letter was co-signed by Representative Sam Graves, the top Republican on the committee. But FEMA was unable to get permission from the Trump administration’s budget office, according to former officials.

The new money would present some challenges, according to people familiar with the program. State and local governments must provide 25 percent of the cost of any projects, an particularly significant hurdle as the economic downturn from Covid has devastated government budgets. And those officials would need to devise projects on a large enough scale to make use of the new funds.

Still, the extra funding is worth pursuing, said Mr. Kaniewski, the former FEMA official. “The more mitigation dollars, the better,” he said. “This is about as good of a taxpayer investment as you can find.”